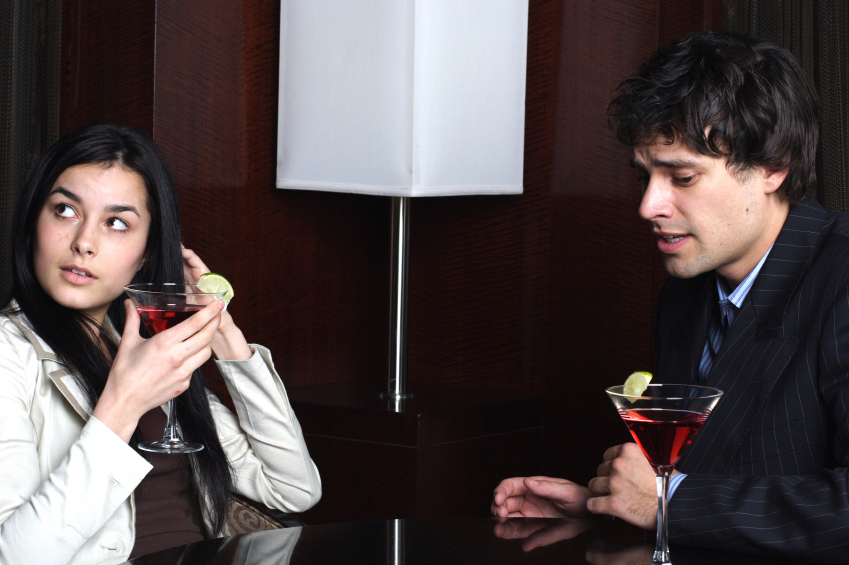 5 Conversation Killers to Avoid When Talking to Women

Everyone likes to have a good laugh.

Laughing makes you feel happy, alive and present in your life. It reminds you about not taking everything so seriously. When it comes to having a conversation with a woman, humor is the fastest way to make her feel good and want to keep talking with you.

If a woman doesn’t feel good, fun, positive, happy emotions when talking to you, then she will usually get bored and seek stimulation elsewhere.

Unlike us men who may enjoy talking for hours about technical and intelligent topics (e.g. science, technology, finance, investing, property, politics, philosophy, sport statistics, cars, etc), when it comes to the dating process and working out whether or not they like you – most women want to feel fun, positive and desirable emotions around you first, before getting into serious topics.

Without the use of humor, the amount of positive emotion you can make a woman feel by what you’re talking about is very limited. This is why you often hear women saying, “I want a guy who can make me laugh.”

After you’ve had sex with a woman or at least kissed her and are hanging out during a date, she will more open to having serious conversations with you. However, before any type of sexual interaction, most women aren’t interested in hearing a guy’s theories about life, politics, etc.

Here’s an example of how Stu started a conversation with a woman in a funny way, which then led to a phone number and a sexual relationship…

Stu was at a club one night and walked up to the bar to get a drink. Out of the corner of his eye, he noticed that the woman standing to his right began to primp and preen her hair.

Assuming that she was doing that to look nicer in front of him, he turned to her, smiled and said, “Don’t worry honey – your hair looks fine…” She laughed and thanked him for the compliment. Stu then told her about the MANY HOURS he spends blow-drying and styling his hair before going out at night.

Stu’s hair was shaved ‘army-style’ at the time, so it obviously didn’t require any styling just a quick towel-dry and he’d be done. The woman saw that Stu’s hair was shaved, realized that he was joking and was laughing pretty much the whole time he talked about it. Humor is best when it is made up on the fly and that is what Stu did.

It’s such a cliché to say “You have to listen more during conversation.” It sounds so OBVIOUS and no doubt you’ve heard it 100 times before, but how good of a listener are you, really? The truth is, if you run out of things to say when talking to women, then you are NOT a good listener.

Most people I’ve met assume that they are good at listening, but after becoming a great listener myself, I know (and so do my friends who are great conversationalists) that only about 5-10% of people are great listeners and thus, great to talk to.

Guys who struggle to keep conversations going with women usually spend MORE TIME thinking about how the conversation is going, whether or not the woman likes him and what he should or could say next, instead of listening and expanding on what the woman is saying. This prevents the guy from allowing his natural intelligence to come up with something to say in the moment.

The best conversationalists LISTEN to the other person and THEN expand on what they’ve heard by offering their own perspectives, asking questions, making jokes and branching off to related topics. They don’t worry about themselves during the conversation, but just remain present in the moment and listen, talk and connect with you in a real way.

Instead of failing to listen because he is thinking about all the things he wants to say to a woman, a guy who is a great listener will be paying attention to what she says, what she doesn’t say, what she is implying, what she might be thinking, etc.

He then uses that focus to effectively expand on the conversation and connect with her in a more interesting and meaningful way. If this means that he pauses for a second before saying what he wants to say, or talks slowly at the start of his response – that is FINE to him and to the woman. The point is: He LISTENS and everyone likes to talk to someone who ACTUALLY listens to them.

Make sure that you listen to her in a relaxed, easy-going way, rather than an overly-excited, eager to please kind of way.

3. Worrying what she will think

Some guys choose to say hardly anything to a woman instead of taking the risk of potentially saying something that she doesn’t like. Then, they complain that conversation with women is too difficult and women play hard to get.

Women ARE difficult to talk to if you talk to them in the wrong way. You see it all the time: Some guys seem to naturally connect with women and enjoy fun, interesting conversations while other guys talk to women in an awkward way, which then causes the conversation to come to an end very quickly.

One of the causes of that awkwardness (there are number of things that cause it, all of which are explained in The Ultimate Guide to Conversation) is worrying about what she will think of what you say.

If you come across as though you are holding back on saying certain things because you are afraid of what she’ll think, most women will NOT be attracted to you and your conversations with them will be awkward and end very quickly. Why? Women are turned off by insecurity in men and turned on by confidence.

4. Being way too pleasant or nice

Most of us guys are GOOD guys. We treat people well and we like being GOOD…and that is a GOOD thing. However, if you talk to women in a way that shows you are trying extra hard (even a little bit too hard) to be extra pleasant or nice in the hope that she will like you – she WILL sense it and she will be put off by it. Why? Women are not attracted to desperate men.

Have you ever been talking to someone who was TRYING to appear as though they were just being nice to you, but you could SENSE that they were up to something and trying to trick you into something? Of course, we’ve all come across those kinds of people.

If you put on an ACT of being nicer and more pleasant than you usually are, a woman will sense it and won’t be able to fully trust you in the moment…and that will turn her off you.

She will realize that she has more value than you in the situation because you’re trying hard to impress her, so by talking to you (and possibly dating, having sex with you or entering a relationship with you) she will basically be doing you a favor. Women want to feel lucky to be with a guy, not feel as though they are doing him a favor.

5. Not flirting enough (or at all)

If you don’t flirt with women, you will almost ALWAYS be seen as “just a friend’ or worse, nothing at all. Flirting is absolutely essential for success with talking to women and it cannot be skipped or overlooked.

We spend a lot of time talking about flirting and providing examples throughout The Ultimate Guide to Conversation. The program includes around 70 examples of flirtatious things that you can say and do around a woman so she WANTS YOU as her lover/boyfriend. If you want to improve your conversation skills with women (including your flirting skills), I recommend that you listen to The Ultimate Guide to Conversation. After listening to the program, you will be able to naturally charm any woman into having sex with you, beginning a relationship with you and falling madly in love with you. Best of all, it won’t be some “trick” that you’re using on her – all of our techniques are always based on being a confident, charismatic guy that women naturally love and want to be with.