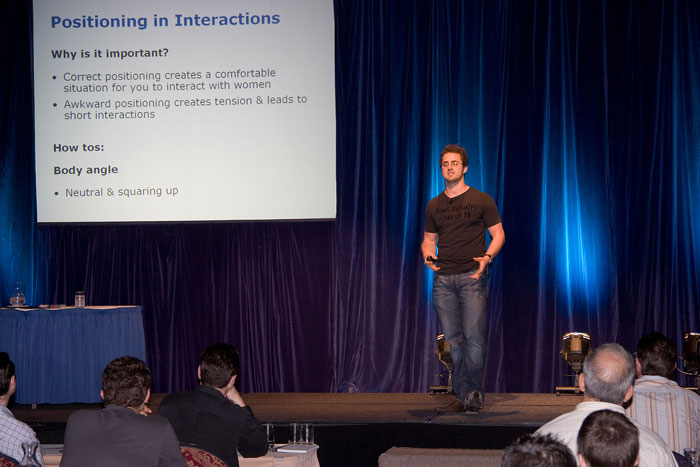 Listen to the audio clip below, where Ben explains WHY he failed when he tried to get a woman to like him.

He also recommends the RIGHT way to get a woman to like you in a sexual way, rather than being stuck in the friend zone.

Hi, this is Ben from The Modern Man.

I’m going to share a story with you now about something that happened to me when I was first starting out in this area of trying to improve my success with women.

I was trying to attract women and get women interested in me, but it was a point in my life where I really had no idea of how to do that.

The story about when I was in college and studying a particular degree (sports science). I remember walking around campus and observing one particular girl.

Her beauty immediately hit me like a ton of bricks. I was thinking, “Ohhh…that girl is so attractive to me. I’d love to meet her and get to know her” but I really didn’t know how.

I had no idea…I felt stuck and I felt frustrated because it was obvious that I could easily walk over and start a conversation with her, but I didn’t know how.

After a lot of frustration built up inside of me, I eventually reached a point where I realized that I just had to get to know this girl.

I had to get her to notice me and get to know who I was.

I remember seeing this girl all the time and to me, she was completely familiar and I knew a lot about her, but in her mind, I barely existed at all.

I hadn’t started any conversations with her, but I reached a point where I knew that I had to somehow get her attention.

Since I didn’t know how to attract women based on how I spoke to them or through my body language and vibe, the only logical solution I could come up with was to write her a letter and explain how I felt.

During class, I got a piece of paper out and proceeded to write a letter to my crush.

I began writing down all the things that I wouldn’t have the guts to say to her in person.

I thought to myself, “I’ve got to get it all down on paper. I’ve got to write this out, so she can know all the things that I want to say to her.”

Essentially, I was writing down how attracted I was to her, how interested I was in her and how I wanted to at least be her friend.

I think the letter went on for about half to three quarters of an A4 sized page.

I remember sitting there writing it and my friend was helping me write because he also had no idea how to attract women as well.

We both thought that this was a good idea and would somehow end up with her being my girlfriend.

After completing the letter that I wanted her to read, I realized that I didn’t have the confidence to walk up and hand it to her.

Luckily, I knew one of her friends, so I handed it to her instead and asked her to pass it on to my crush.

Over the next couple of days, this girl became very aware of who I was and an interesting thing started to happen…

We actually started to talk.

She was open to talking to me in person, face to face and she seemed to be showing some interest.

I thought, “I’m in!” and was feeling excited about the possibility of being her boyfriend and having sex with her.

Yet, she was just leading me on.

Since I wasn’t making her feel any attraction when we interacted and was simply behaving like a nice friend who had a crush on her, she milked it for all it was worth.

She pretended to be interested in me, but was always dating and sleeping with other guys.

This went on for a couple of years and I was always wondering how I could get her to feel the same way about me, but no matter what I did, she continued to only look at me as a friend…or a loser who had a crush on her that she never, ever intended to sleep with.

I was so clueless about how to get a girl to want to begin a sexual relationship with me that I actually bought this girl a present, thinking that it would wow her and make her see that I was worthy of being with her.

I took it into where she was working part-time and gave it to her.

All I got was an “Aww, thanks…you’re so sweet,” but I didn’t get a kiss, a date or anything that a boyfriend or lover would get.

I was crazy about her.

In my mind, she was the girl for me and I just had to work out some way to get her to realize that I was the guy for her.

Yet, buying her a present, being a nice friend for more than 2 years and anything else I tried just wasn’t working.

Back then, I didn’t even realize that the majority of guys who saw her or met her were interested in having sex with her.

I thought that I was only one of a few guys who liked her or would have sex with her, but as it turns out, pretty much every guy would have had sex with her if he had the chance.

In my college years, no one had ever told me that and I didn’t understand why girls were more attracted to the guys who were more of a challenge.

I thought that the answer to getting a girl was to be nice to her, be patient and hopefully she will eventually say yes.

Back in college, I didn’t know all these sorts of things.

I didn’t know how to start a conversation with a girl I liked and make her like me too.

I didn’t know how to attract her or make her laugh.

All of the things that we now teach at The Modern Man were completely unknown to be back then.

All I could come up with was a letter expressing my feelings for her.

I had no idea that I needed to create feelings of sexual attraction inside of her during interactions, rather than being all soppy and emotional about my feelings for her.