However, the problem is that sexual fantasies are usually meant to be just that, fantasies.

In life, you don’t have to make all of your fantasies become a reality to be happy.

It’s fine to imagine doing some crazy things that may mess up your relationship, but that doesn’t mean you have to follow through on it.

According to studies done on the subject, rather than revving up the sexual spark in a relationship, bringing other people into a relationship rarely works out in the way it was intended.

If you know that you aren’t intending on staying with your girlfriend for life, then go ahead and enjoy it.

However, having a” three way” might work out to be a good thing if both of you are:

That last point there is usually the problem point.

Instead, it’s just going to be an easy way for her to break up with you and move on without you before you find another girl.

That way, she can escape the pain of being the one who was broken up with. 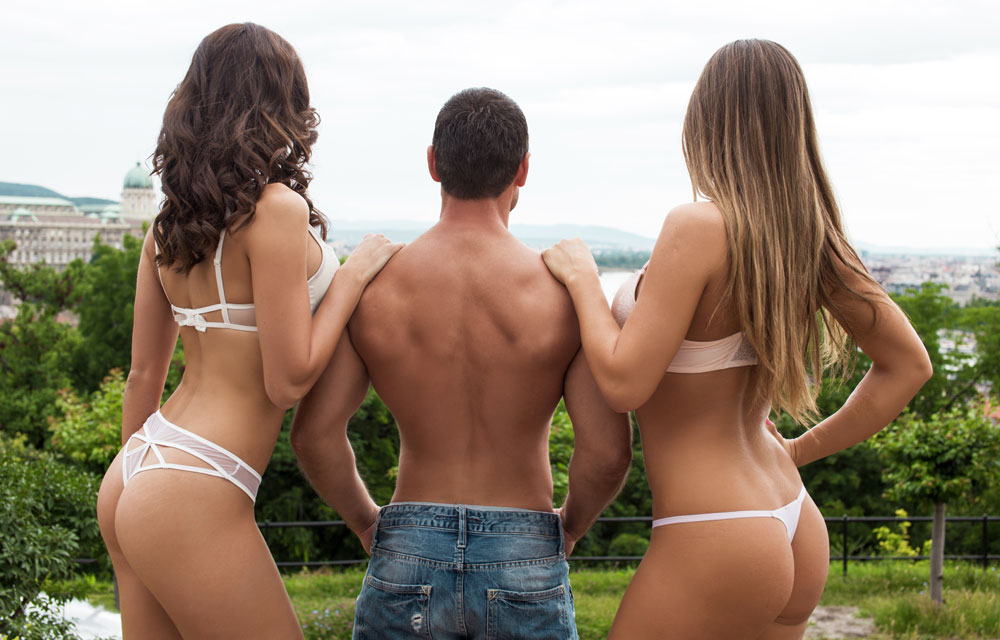 Not all relationships are intended to last for life and your girlfriend may just be with you for fun for a while.

That’s okay if you’re cool with it.

You and her can enjoy yourselves and explore different things together, as long as you know that the relationship will probably end in the near future.

Of course, the exception is when you and your girlfriend aren’t very committed to each other, are just with each other for fun and are secretly intending to break up one day anyway.

What’s it Like to Be With Two Women at Once?

Personally speaking, I’ve had three threesomes in my life and while it was good for my ego, it wasn’t that amazing in terms of the sex.

It was enjoyable, but it isn’t something that even makes the top 5 list of great things that I’ve done in my life.

Essentially, you’ve got two women who are looking to take turns to ride your rod and if you ignore one of them, she usually feels left out and sort of becomes useless unless you’re instructing her to do extra things (e.g. play with your balls, suck the other girl’s tits, etc).

That said, there are some really good moments and it does feel great where you’re skin-to-skin with two women and they’re taking turns to kiss you, while stroking your middle leg.

It’s nice, but it doesn’t compare to the heart buzz you get when you’re kissing and having sex with a sexy woman that you truly love.

It is fun though.

That was pretty good.

However, I have to be honest and say that nothing compares to the love, sex, intimacy and companionship that I’ve shared with my girlfriend (who recently became my wife after a brief engagement period) over the past 2.5 years (this is her if you wanted to check her out).

I’m not saying that to be nice to her or to be politically correct. It really is true. She is more than enough woman for me.

I don’t have any desire to add more women into our relationship and I certainly wouldn’t approve of her wanting to add a guy into our bedroom.

If my wife wanted that, she’d be dumped in an instant if she didn’t change her mind. There’s no way that I would put up with that sort of emotional disloyalty.

Of course, she wouldn’t ask for that because I’ve chosen to marry a hot, sexy woman who is as loyal as it gets.

She is all for family, sticking together for life and laughs at any idea of ever breaking up or giving up.

She’s once said that it would be a nightmare for her to try to find another guy like me.

I’m not saying that to brag, but to point out something important about your girlfriend…

However, it takes emotional maturity and a high level of confidence in all three people involved to be able to handle the reality of acting out a fantasy and then parting ways without destroying the relationship.

Personally speaking, my wife is very confident and knows that she is hot, but I know that she wouldn’t be able to handle seeing me with another woman.

She just wouldn’t want another woman getting the experience that she gets with me in the bedroom. She booked that for herself when we said, “I do.”

It never happened, but I eventually broke up with her anyway because she wasn’t the type of girl that I could trust for life.

She wanted to settle down and start a family, but her parent’s were divorced, her best friend was divorced and she didn’t think that there was anything wrong with that.

She saw divorce as normal and almost expected, which was one of the main reasons I broke up with her.

What about you and your girl?

Is she serious about you? Does she want to settle down with you? Is she just with you for a bit of fun for a while?

You have to get clear on that and then make your decision based on that.

The names and some details have been changed to protect privacy, but this is roughly what I was told by two phone coaching clients…

“At the time the idea first came up, all I was thinking was – awesome! The idea that there might be drawbacks didn’t enter my mind. However, after the event I realized that I probably enjoyed the experience more than she did. When we talked about it, she said that in her fantasy she got aroused by watching me with another woman, but in reality she felt insanely jealous and it hurt her to think that I might be enjoying sex with another woman more than her.”

The fallout from the event is that Drew’s girlfriend then had much lower self-esteem around him than before and became insecure about being naked around him.

She compared herself to other women all the time, and questioned Drew’s feelings for random women that he would happen to mention in conversation.

For her, acting out her fantasy was a mistake because she had not considered the emotional impact it would have after the fact.

For Drew, he essentially said…

What Will Your Next Move Be?

Let her know that millions of couples from all over the world have worked out how to remain happy and in love for life, without having to add other people into their bedroom.

My Girlfriend Wants to Go Out Alone With Her Friends. Should I Be Worried?

My Girlfriend Says Other Guys Are Hot