My Wife Wants Me to Sleep With Another Woman

When a man says, “My wife wants me to sleep with another woman,” his friends might laugh and encourage him by saying, “I wish my wife would say that to me!”

So, if you’re in the position where you are saying, “My wife wants me to sleep with another woman,” it’s likely that you’re not comfortable with the idea; even if part of you feels quite excited about it.

You may be asking yourself some of the following questions:

I’ve been helping men to fix their relationship and marriage problems with women for years now and every time sex with another person was added into the relationship, it ended in a break up, separation or divorce.

In other words, I would not recommend that you sleep with another woman if you actually want to stay with your wife.

Most people cannot handle it.

She might act like she can now, but things can and usually do change…especially, if she then starts talking about wanting to sleep with another man to even the playing field.

To keep your marriage together, you’ve got to avoid setting of negative chain reactions that will tear you and her apart.

Although sleeping with other people is not recommended, the reality is that there is no one size fits all when it comes to the rules of marriage.

Every husband and wife is different and every relationship is based on a unique combination of likes, dislikes, morals, beliefs, interests and attractions.

In today’s world, ideas about marriage are not as hard and fast as they used to be in the past where classic monogamy was the norm (i.e. the man and woman marry as virgins, remain sexually exclusive to each other throughout their lives and become celibate after the death of one or the other) and everything else was considered taboo.

Today, some couples are more relaxed about what marriage and have become open to the idea of serial monogamy, which essentially means that the couple chooses to be sexually faithful for the duration of that relationship, (i.e. until they break up, get divorced or one person dies) and then they are free to move on to their next monogamous relationship.

Although serial monogamy is now the most common form of relationship between men and women in today’s world, there are also couples that choose to be in non-monogamous relationships.

So, if a woman tells her husband that she wants him to sleep with another woman, it may be because she’s the type of person who is interested in being in something other than a traditional, monogamous relationship.

If both agree to it and they feel that it’s a lifestyle they can easily pursue together that will bring them the most joy, while still being in a loving, happy relationship with each other, then so be it; there’s no general rule that says every couple has to be the same.

However, although there are many husbands and wives that this free love type of lifestyle appeals to, in most cases, when a wife tells her husband she wants him to sleep with another woman, it may stem from a deeper underlying issue in the relationship.

Modern-day psychologists generally agree that it’s perfectly normal and healthy for both men and women to have sexual fantasies, and that having fantasies while married is no longer a sign that the person is unhappy with their spouse.

In most instances, fantasies are generally just a form of escapism and nothing more.

It’s a chance to experience something kinky or unusual without the risks that would be involved if it were to happen in real life.

If your wife wants you to sleep wit another woman, it may simply be a fantasy that she has brought back with her into the real world.

So, the question now is this…

Why is She Suggesting it?

There are many reasons why a wife might suggest that her husband sleeps with another woman, including…

1. She is testing to see how devoted he really is

If your wife is insecure about your attraction for her and your devotion to the marriage, she might be bringing that up to see if you will go through with it.

She wants to see if she can push you to have sex with another woman and if you do, it means that she was right to think that you couldn’t be trusted.

According to studies conducted by several psychologists and relationship therapists, when a woman fantasizes about her husband having sex with another woman, it’s often because she fears being cheated on.

2. She wants to get rid of him

Another reason why a wife will want her husband to begin sleeping with other women is that she knows that he won’t accept a divorce if she just goes for a clean break up.

She feels as though he will probably beg her and plead with her for another chance, which will drag the marriage along further. She will then find it very difficult to move out or to get him to sign divorce papers.

3. She wants to get a better divorce settlement and get custody of the children

When a husband is already sleeping with another woman, it doesn’t look good to the judge at family court.

A wife can easily make herself look like an innocent victim of horrible infidelity and get a much better divorce settlement and control of the children.

4. She is trying to get the spark back in the marriage

In most relationships, the idea of taking a fantasy or a fetish into the realm of reality is not really that appealing because the couple is already happy with their love and life together.

So, although a wife might be saying that she wants her husband to sleep with another woman, it’s possible that it’s just her weird way of trying to spice up their sex life.

Deep down, she might know that it’s a bad idea, but she is simply trying to get the spark back in the marriage so she doesn’t end up losing you if you decide to have an affair behind her back.

5. She wants him become open to gradually the idea of her sleeping with another man 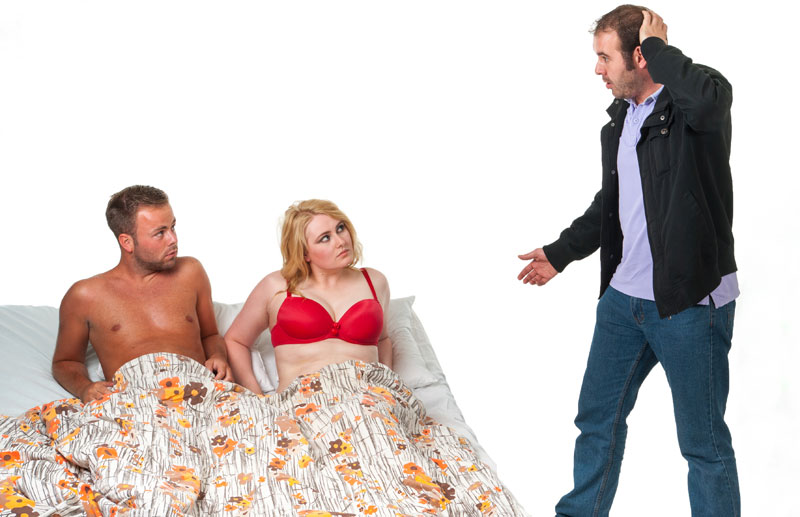 Why would your wife want you to enjoy the pleasure of sticking your penis into a woman and enjoying yourself? What enjoyment does she get from that?

Why would she want you to passionately kiss another woman or develop feelings for her? Is she not going to feel jealous?

It just goes against human nature.

A woman won’t encourage her man to go and sleep with other women unless she has an ulterior motive or if she is very sexual and wants to try all sorts of fantasies throughout her life.

So, if you do decide to go ahead with it, just know that there is usually much more to the story than she is letting on.

If you want to avoid destroying your marriage by sleeping with other women, here’s what you need to do…

Create a Relationship Dynamic Where You Become Her Fantasy

On a deep and instinctive level, today’s women are still looking for the kind of man that can both provide for them and protect them.

Even though a woman no longer needs her man to be able to hunt down a buffalo or take on a rival tribe to protect her, she does need him to be emotionally strong enough to survive and thrive in modern society.

A woman also needs a man who has what it takes to take the lead in a relationship, which then allows her to relax into her feminine self. She can feel protected and safe knowing that she is with a man who will remain strong no matter how challenging life gets.

When she can see that on a consistent basis, she knows that she can relax and she doesn’t have to think, feel, behave and act like a man would.

She can be a real woman (i.e. feel feminine, be girly, be emotional, focus on being in love), rather than having to be a neutral woman who takes on a more masculine, manly way of being.

So, if you want to be your wife’s fantasy man, you’ve got to let her think, feel, behave and act like a woman when she is around you.

By being this type of man for your wife, she will naturally feel turned on by you and her fantasies will revolve around the ways you can make her feel good when you’re together.

When you can turn your wife on and make her feel sexy around you in new and exciting ways, she will automatically feel happier and more content in her relationship with you.

The more attraction you can make her feel for you, the more intense her sexual desire for you will become and the less she will turn to weird, possibly marriage-destroying fantasies to make her feel the way she wants to feel.

What a Woman Needs in a Relationship

How to Make My Girlfriend Feel Special: 8 Examples