How Do I Get My Girlfriend Back? 6 Essential Tips

If you’ve been dumped by your girlfriend and are now wondering, “How do I get my girlfriend back?” here is what you need to do…

1. Fix your deeper issues, rather than focusing on superficial things

Your girlfriend didn’t break up with you simply based on one argument or one little thing you did.

She might be pointing out one or two things that you did throughout the relationship turn her off or ruin the respect, love and attraction that she felt for you, but there will other, more fundamental things that really caused her to want to break up with you.

For example: A woman will often break up with a boyfriend if she feels as though he is not enough of a man for her at this point (e.g. he might be too insecure, she might feel like she is more mature than he is, he might lack purpose in life and be focusing way too much time and energy on her as a result, she may feel as though he isn’t masculine enough in the way he thinks, feels and behaves around her to make her feel like the feminine woman that she wants to be, etc).

To show her that you have improved, you need to begin closing the gap between the man you are today and the man you want to become.

Right now, you might be a great guy, but you know that you can do better. No doubt, your girlfriend also knows that you can be a better man.

However, you can expect your girlfriend to sit you down and teach you where you’ve been going wrong and what she wants you to change.

That’s not a role that a girlfriend wants to take on for her boyfriend, because it puts her in a position where she feels like more of a big sister, mother figure or teacher.

The position she really wants to be in is to feel as though she is your woman, your girl.

She wants to be able to look up to you and respect you as her man, who is capable of taking the lead and being the man she needs.

She doesn’t want to feel as though she needs to lift you up and carry you throughout life, constantly teaching you how to be the man that she needs.

She wants you to fix the deeper issues that really caused her to break up with you in the first place.

If you don’t start to fix those things, nothing that you say to her will change how she feels about the break up, because she will see that you are still the same old guy who doesn’t yet know how to be the man she needs.

You don’t have to become perfect and fix everything, but you do need to start making progress in those areas to show her that you really have changed.

As a result of making progress in those areas (e.g. becoming emotionally stronger, more emotionally mature, having more purpose in life, making her feel more feminine around you) she will naturally feel differently about you and her guard will begin to drop.

When her guard drops, she will then become open to feeling more respect and attraction for you and when that happens, she will naturally begin to reconnect with the love that she once felt for you.

These days, most guys make the mistake of texting their girlfriend as a way to explain themselves, convince her or simply stay in her life like a friend.

It will be on the phone call that she will be able to hear the changes in how you speaking, thinking and feeling and it’s in person that she can observe and experience the new and improved you.

She’s not going to be able to see or experience that via text.

In fact, if your girlfriend currently has a negative perception of you, she’s most-likely going to read your texts in a negative light and assume that you’re the same old guy who hasn’t changed at all.

3. Make her feel differently about you, rather than trying to convince her with logical reasoning 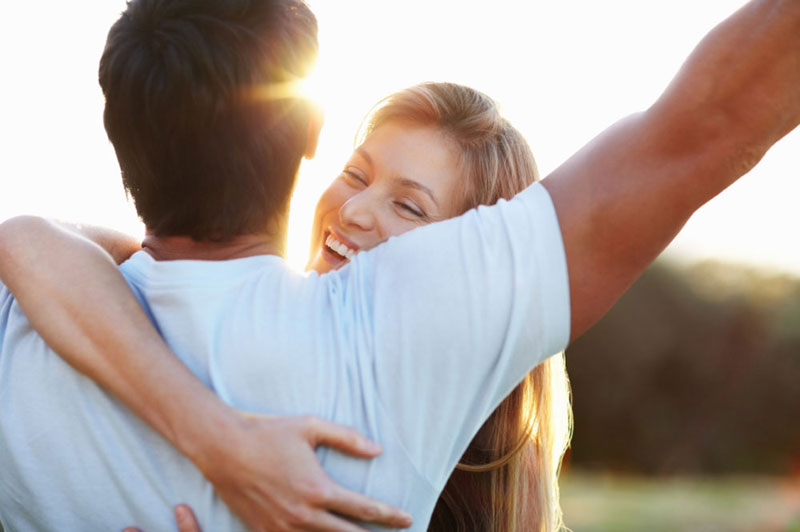 You are most-likely a good guy and you have good intentions with your girlfriend.

For example: You want to get her back because you love her, you’ve learnt from your mistakes and you know that you are capable of having a better relationship with her this time.

Yet, trying to explain all that to girlfriend is not going to make her want to get back with you.

A woman will rarely get back with a guy simply based on his logical reason and explanations of why she should give him another chance.

If she does and then realizes that he hasn’t actually changed, she will simply break up with him once again.

So, what you actually need to do is start to trigger her feelings of respect and attraction for you as a man to make her feel differently, rather than explaining why she should give you another chance in the hope that you can get her to think differently.

When you focus on making her feel a strong, renewed sense of respect and attraction for you, she will then naturally begin to open herself up back to you.

4. Refresh your understanding of how to actually make a woman feel attracted to you

When in a relationship, many guys lose their ability to attract and charm their girlfriend and other women.

A more traditional way of looking at it is that a guy simply loses touch with his ability to make his girlfriend and other women feel attracted to him.

He feels safe in the relationship and believes that his girlfriend would never leave him, so he doesn’t feel as though it’s necessary to worry about being attractive to his girlfriend or other women.

To keep a woman in a relationship, you must continue to the sort of guy that is attractive to her as well as other women.

Your girlfriend needs to feel lucky to have a guy like you, because you could easily have other women, but you are choosing her because you love her and she is special.

If you need a refresher on how a woman’s attraction for a man actually works, watch this video and I will explain it for you…

As you will discover from the video above, much of a woman’s attraction for a man comes down to how he makes her feel when she interacts with him.

For example: If you continually display personality traits, behaviors and inner qualities that naturally attractive to women (e.g. confidence, charisma, emotional masculinity, the ability to make her laugh and smile, etc), then your girlfriend’s attraction for you will deepen over time, rather than fading away.

5. Stop chasing her and start attracting her instead

If you’re wondering, “How do I get my girlfriend back?” because you’ve tried everything and nothing is working, here is what you need to ask yourself…

Have you actually been making her feel attracted to you lately, or have you simply been chasing her and trying to get her back because you are attracted to her and need her in your life?

Are you trying to get her to want you back by explaining how you feel about her and why she should give you another chance? Do you keep trying to convince her no matter how many times she rejects you?

If so, what you need to understand is that most women really don’t care about their ex-boyfriend’s feelings after they have broken up with him.

It is about her and how she feels, not about you and how you feel or what you need.

A woman will rarely get back with a guy because he feels lost without her, loves her so much or because he is promising to change.

So, what does get her back?

A woman will begin to open herself back up to you when you are able to make her experience renewed feelings for you.

It’s about her and how she feels; that is what really matters.

For example: If a woman dumped a guy because he was too clingy and didn’t have much purpose in life, she’s going to feel respect and attraction for him if he starts making real progress towards achieving his biggest dreams and ambitions in life (i.e. he starts living with purpose).
She is going to see that he is moving forward in life with or without her, rather than sitting around and waiting for her to hopefully take him back and give his life some meaning again.

6. Meet up with her and let her experience the new and improved you

The most important part of getting your girlfriend back is when you actually meet up with her in person.

You will need to have truly made progress and grown as a man emotionally, to be capable of making her feel enough respect and attraction for you at the meet up.

Don’t meet up with her if you haven’t improved on the fundamental reasons why she really broke up with you.

A woman isn’t going to care if you’re wearing nicer clothes, have a better haircut or have been going to the gym since the break up.

That’s not what really matters to her.

The most important thing to your girlfriend is the emotional state that you are in now and how that makes her feel as a result.

For example: If you meet up with her and you are confident, self-assured and are able to get her smiling and laughing, then she is going to feel happy, attracted and respectful of you.

On the other hand, if you meet up with her and you are being insecure, doubting yourself, letting her control the dynamic of the interaction to be more cold and emotionally distant, then she’s not going to be feeling a lot of respect, attraction and love for you.

Instead, she will be happy that she did break up with you and will want to move on even faster because she will be reminded that you don’t make her feel the way that she really wants to feel.

My Girlfriend Wants to Take a Break

How Fast Can You Get Your Ex Back?