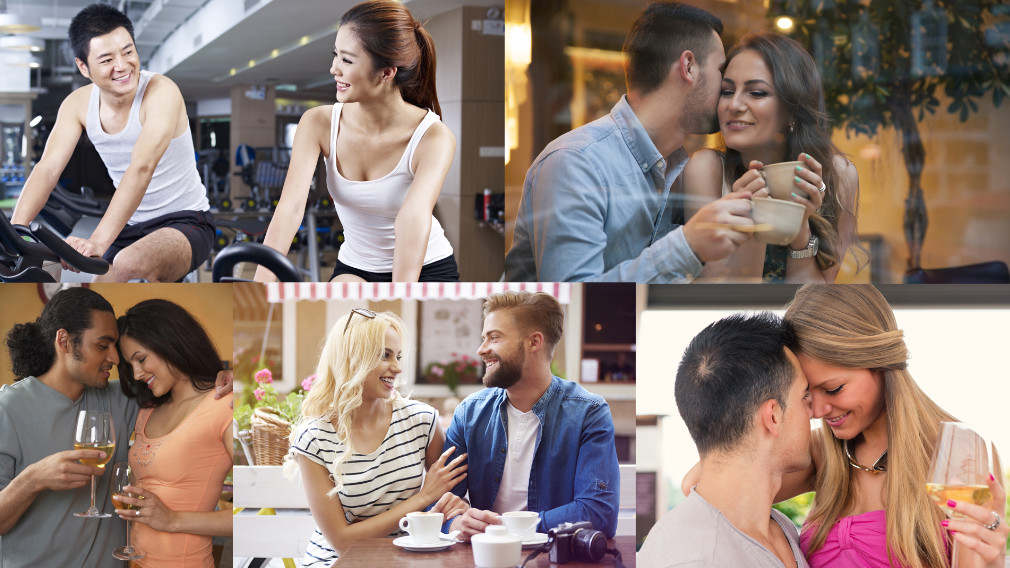 The key to flirting body language is to allow the woman to experience your confidence and masculine vibe while you are displaying it.

Women are mostly attracted to a guy’s confidence and masculinity, so when she notices that you are confidently flirting with her with in a manly way (i.e. as opposed to trying to be cute, or being too nice or polite), it will turn her on at a very deep and instinctive level.

A woman’s attraction to that subtle part of an interaction with a man isn’t something that women go around explaining, or telling men about.

Instead, it’s just something that women instantly react to in a positive, excited way.

A lot of guys are afraid to show interest in a woman, in case they get rejected, or are seen as being ‘too forward’ or sleazy.

You won’t have that problem with flirting body language, as long as you confidently own what you are displaying, rather than worrying and thinking that you might be coming on too strong.

You will be able to show interest in her in a subtle, discreet and attractive way, without actually having to say, “Hey, I like you…do you like me?”

Then, when a woman instantly begins to respond to your flirting body language by flirting back at you, or by acting shy, she is literally telling you that she likes you in a sexual way and notices the signals you are giving her.

That all happens without having to discuss whether or not you like each other.

It’s communicated discreetly and allows the woman to then begin showing interest in you, without worrying that you might reject her.

Many women are worried about being rejected, especially when they talk to guys who are just being nice, polite and friendly.

So, don’t be afraid to use one of these flirting body language examples the next time you’re interacting with a woman you like…

The cheeky smile isn’t a cheesy, sleazy, goofy or over the top sort of smile.

It is a relaxed, slightly mischievous kind of smile that essentially says to her, “You’re sexy and I like you. I know that you like me too. I can see it in your eyes.”

Try doing the cheeky smile right now as you read this.

Imagine yourself talking to a beautiful woman and also imagine that you know for sure that she wants to have sex with you.

Without a doubt, she wants to have sex with you and is hoping you feel the same way.

So, by confidently showing her (via your body language and vibe) that you know she wants to have sex with you, she will become more turned on by the fact that you are being confident about it, rather than panicking, feeling nervous or acting like a really nice guy, to avoid ‘coming on too strong.’

Displaying a cheeky smile is not about being sleazy, but it is about being confident, manly and owning the moment, rather than shying away from it.

So, while she is talking to you, look her in the eyes and display a cheeky smile while continuing to maintain eye contact.

If you do it correctly, she will notice, start smiling and might even say, “Whaaat?” in a girly kind of way, because she is trying to not seek too keen, or make it too obvious that she’s feeling attracted/likes you.

While giving her the cheeky smile, you can then begin to display the next type of flirting body language, a Suspicious Squint of the Eyes.

A Suspicious Squint of the Eyes

While giving her a cheeky smile, try to squint your eyes a little like you’re a bit suspicious about her.

Think to yourself, “This girl wants me so bad. She’s making it so obvious” and then use that vibe to look at her in a suspicious way.

She will pick up on that vibe, worry about seeming too keen, but love it at the same time.

She will experience what women refer to as, ‘butterflies’ in her stomach.

In other words, she’ll feel a spark with you, feel the sexual tension and enjoy it, rather than feeling bored with you because you’re being too nice and polite.

To add to the squint, playfully (in a manly way) give her a disapproving look for seeing you as some sort of sex object, without actually telling her that you’re thinking it.

Once again, you will most likely get a, “Whaaat?” from her with a big smile and her feeling excited, turned on and curious as to why there’s so much of a spark between you and her.

Most guys are way too afraid to use flirting body language like that because they fear the woman will feel annoyed, or assume that the safest approach to women is to just be nice.

Yet, if you want to get laid or get a girlfriend, you need to have the courage to use the safe, discreet and exciting language of flirting.

When Should You Use Flirting Body Language?

The best time to use flirting body language is after you’ve made a woman feel attraction for you.

In other words, don’t go from acting like a friendly, nice guy to suddenly displaying a cheeky smile and squinting at her, because she will likely see that as weird or out of place.

First, make her feel attracted to you by displaying personality traits and behaviors that are naturally attractive to women (e.g. confidence, masculinity) and then begin to flirt with her.

When you do it in that order, she will feel excited, turned on and will want to explore her sexual feelings with you.

If you are serious about becoming successful with women, I will teach you easy-to-use techniques to flirt with women and make them feel attracted to you immediately.

When you know how to attract women with your body language, conversation style, attitude and vibe, you will notice how simple and easy it is to get laid, get a girlfriend or maintain a woman’s attraction in a relationship.

Being able to attract women is an essential skill that every guy needs to have.

If you are unable to properly attract women, most women will either reject you when you attempt to pick them up.

In a relationship, the woman will gradually lose interest and will either dump you or leave you for another man who does know how to make her feel attracted.