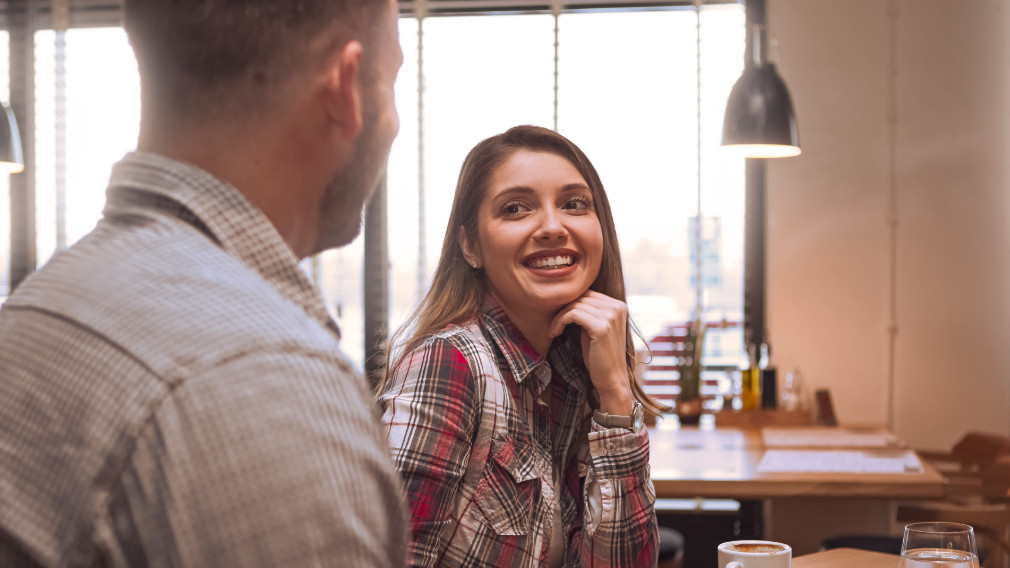 Compare that to a guy who is nervous around her and worried about showing any sexual interest, so he just sticks to being nice and polite.

There’s nothing wrong with being a good guy and being polite, but if you want a woman to feel excited about interacting with you and looking at you as more than just a friend, then you need to switch into another mode of interacting, commonly known as flirting.

Flirting is the secret language that men and women need to speak to each other to say, “I like you and want to have sex with you” without actually having to say it.

It’s a subtle, discreet way of communicating that is often the difference between getting laid and getting a girlfriend, or being placed in the dreaded friend zone.

Unfortunately, most guys aren’t aware of what flirting is and some guys make the mistake of assuming that it’s just mind games, or unnecessary small talk.

As a result, a lot of guys make the mistake of telling a woman that they like her and hope she will be excited to hear it.

Yet, the reality is that a woman will only be excited to hear that you like herm, if you’ve made her feel sexually attracted to you first.

If you’re only being friendly with her, but secretly feeling attracted to her, there is no guarantee that she is going to feel the same way about you.

In almost all cases, you have to make a woman feel attracted to you based on your approach to her (e.g. being confident, manly, flirting), rather than just being friendly.

In some cases, you can get lucky by simply being friendly, but that rarely happens and almost never happens with the kind of girls you really want.

Mastering the Fine Art of Flirting

Flirting is like a fine art that takes a little bit of getting used to.

Once you get it, you get it and can enjoy the art.

Prior to then, it may seem a little weird, or you might not truly understand why a woman is reacting in a certain way to something flirtatious you said.

Additionally, if you come on too strong with flirting, it can make women feel uncomfortable, whereas if you apply it too lightly, a woman may not even notice that you’re trying to flirt with her.

While you are in the process of mastering the skill of flirting, the best way to avoid messing it up is to simply believe in yourself, no matter what.

Believe that whatever you are doing to flirt with her is more than good enough, because that will cause you to display confidence, which is attractive to women.

When she feels that confidence coming from you, she will become more attracted and as a result, will want to turn on her charms, flirt with you and get to the point of kissing you or having sex with you.

Begin flirting with these proven flirting tips for guys:

1. Tell her that she’s sexy

In a confident and subtly sexual way, tell her that she’s sexy.

Look her in the eyes, smile in a manly way and say, “You’re sexy.”

If you have been behaving in a confident way around her, she will have been feeling attraction for you and as a result, she will welcome and enjoy the flirtatious compliment.

In almost all cases, a woman will then flirt back by giggling or displaying submissive body language (e.g. dipping her chin down and looking up at you like a little girl, biting her bottom lip, looking shy, etc).

In the video above, I explain some of the most common types of body language a woman will display when she is attracted.

Many women display that kind of body language to flirt with you, rather than directly saying, “Hey, I like you” or, “You are turning me on.”

So, be sure to look out for those signs and if she is interested, move in for a kiss, or ask her out on a first date.

2. Say it without words

As a man, you are mostly turned on by how a woman looks, whereas a woman is more attracted to your actions, behavior and vibe.

So, when you are talking with her, let her know that you find her attractive by looking at her with a slight, mischievous smile.

Do this once or twice during a conversation and you’ll notice that she’ll become a bit shy and smile back at you.

All of a sudden, it will be like you and her have a private understanding between you.

You are essentially telling each other that you feel attracted to each other without actually saying it.

If she wasn’t attracted to you, she wouldn’t return the smile and would likely ask you, “What are you smiling about?” in an annoyed or assertive way.

3. Reach out and touch her

On a first date, or during the first conversation, confidently touch her on the side of the arm when talking to her.

Do it in a calm, easy-going and confident way, rather than a tense, nervous and self-doubting way.

When she notices that you have the confidence to reach out and touch her, she will naturally feel more attracted for you.

You have to have the courage to display confidence, in order to make a woman feel attracted to your confidence.

Don’t hide away from it and hope that she’ll like you for being nice and polite, or being really friendly.

You’ve got to make her feel sexually attracted.

Sexual attraction is the difference getting to the bedroom with her, or being placed in the friend zone.

Another way of initiating touch, is if you’ve only just met her and she says something cute of silly.

Simply reach out and give her a little tickle for a second, then say “You’re cute…that was funny.”

Say it in a confident, manly way, rather than a giggly, girly way (i.e. to hopefully be seen as being nice, or as a result of trying to copy her vibe or behavior).

If you touch her in a confident, manly way and say, “You’re cute…that was funny” or, “That was funny…you’re cute” she will feel girly in comparison to your masculinity, which will turn her on.

She will also know that you are flirting with her, which will then make her feel more confident to flirt with you and show sexual and romantic interest.