How to Avoid Awkward Silences in a Conversation

Have you ever been talking to a woman and then run out of things to say? Do you find it difficult to keep conversations going and keep them interesting?

Don’t worry – most guys do. Yet, what most guys don’t realize about the dreaded “awkward silence” in a conversation is this:

1. It’s completely normal and natural for a conversation to have pauses and silences

When two humans speak to each other, they don’t have to be exchanging dialogue 100% of the time. It is completely normal and natural for a silence or pause to occur in a conversation.

2. It’s not an awkward silence if you don’t think it is 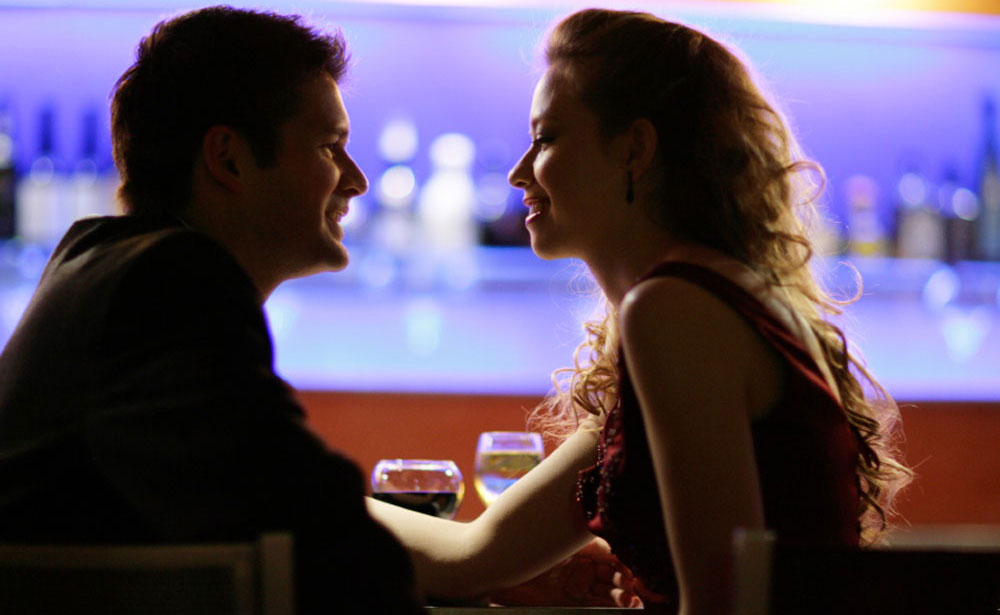 Why do you think that the silence is “awkward”?

A confident guy like me is totally comfortable when silences happen in conversation. Why? If a conversation goes quite, I don’t think anything; I have nothing to prove because I already know that women feel attracted to me.

How do I know that? It’s easy to attract women.

You can attract women by being confident, having a masculine vibe, being charismatic, using humor, etc. It’s easy and when you know how to attract women in those ways, you don’t have to worry about any silences during conversations. In fact, you can make her more attracted to you by remaining confident when the conversation does go silent at times.

3. If she is attracted to you, she will usually try to fill in any silences

When a woman feels sexual attraction for you and is hoping that you like her too, she will usually worry that you will lose interest in her if there are long pauses or silences during a conversation.

If you just relax and wait for a minute, she will eventually ask you something boring like, “So, what do you do?” or “So, do you come here often?” or something similar.

Of course, there are some cool women who know that silences during a conversation are normal, natural and expected. In those cases, she will just wait for you to keep the conversation going or will lose interest if you get nervous about the “awkward” silence.

Do You Get Nervous When a Conversation With a Woman Goes Silent? 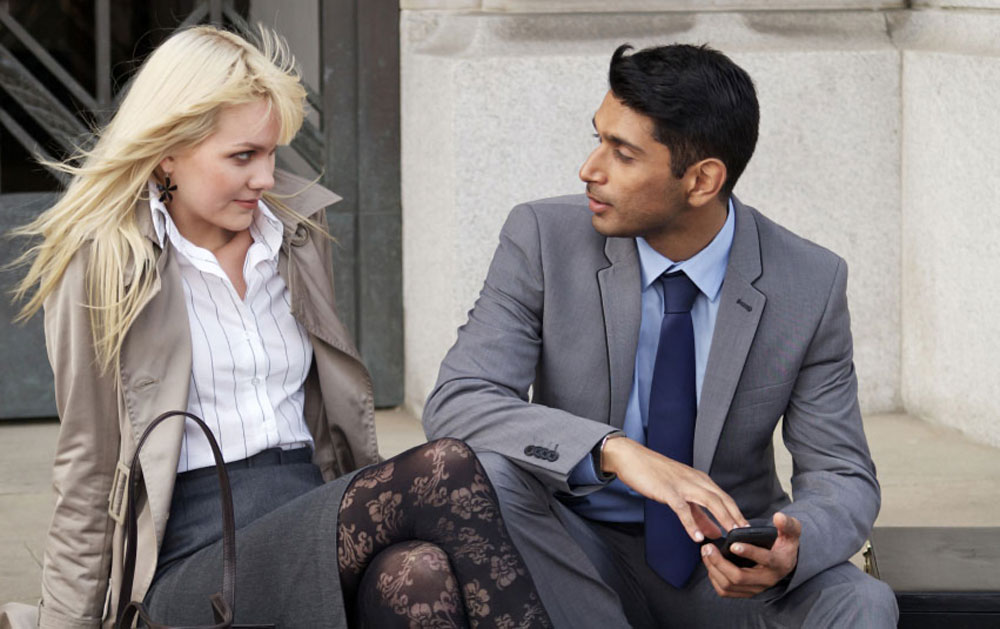 Many women will intentionally let a conversation go quiet because they want to see how you will react.

Will you become nervous and begin to doubt that she likes you, or will you remain confident and calm? Since women are mostly attracted to a guy’s confidence, they are always trying out different ways to test your confidence during a conversation, on a date, during sex and in a relationship.

Even confident guys like me still experience constant testing from women. Why? Women want to feel as though you are stronger than them (mentally and emotionally), so it then makes sense for them to submit to you during conversation, sex and in a relationship.

If a woman feels stronger than you, then it just won’t feel right for her to open herself up to you and be penetrated by you during sex, or to follow your lead in a relationship. Women want to submit themselves to men who feel stronger than them, mentally and emotionally.

When a woman tests your confidence by letting a conversation dry up and creating a lengthy pause, she will be watching to see what happens to your body language, behavior and conversation style.

This is not something that you can fake for too long because your true self is always coming through via your body language, behavior, actions, conversation style and vibe. The key to success with women is not to “fake it until you make it,” but to actually become confident and alpha.

If you avoid that and hope to get by with tricks, most women will catch you and reject you for it. Women are looking for real men who are genuinely confident and if you can display that during a conversation, most women that you meet will like you and open themselves up to the idea of being with you.

There are many ways that a guy will mess up a conversation with a woman that he’s trying to attract. Here are three common ones:

When a guy lacks confidence around women and his insecurities begin making him feel nervous, he will often make the mistake of talking too much in an attempt to fill in any gaps or “awkward silences” during a conversation.

When that happens, he will often make the mistake of beginning to brag about his achievements or what he is aiming to achieve in life, in an attempt to impress the woman.

The more he tries to impress her, the less impress she is. Why? Women are impressed by men who are confident and don’t feel the need to brag and hope to get the approval of others.

To be a confident, alpha male that women will feel naturally attracted to you have to start by realizing that you are already good enough and do not need to hopelessly try to get women to like you.

Fearing silence and feeling awkward when no one is talking indicates that a guy is not relaxed and comfortable just being himself. Women are always actively on the look out for this type of insecurity and anxiety from a guy, because it helps them pick out the boys from the men or the alpha males from the omega males.

In Hollywood movies, TV sitcoms and dramas, you will often see women falling in love with the nervous, socially-hopeless nice guy. He will say all sorts of awkward things and cause awkward moments, but he will then save the day, save the girl or save the world and then she will fall madly in love with him.

In the real world, women are turned off by nervous, self-doubting guys and simply have sex with alpha males instead. Many nervous, shy and insecure guys manage to get lucky and score themselves a girlfriend, but they almost always end up getting cheated on or dumped by her.

As you will discover from the video above, women are lot easier to attract than most guys realize.

As long as you display the personality traits and behaviors that are attractive to women, most women will like you and be interested in being with you. 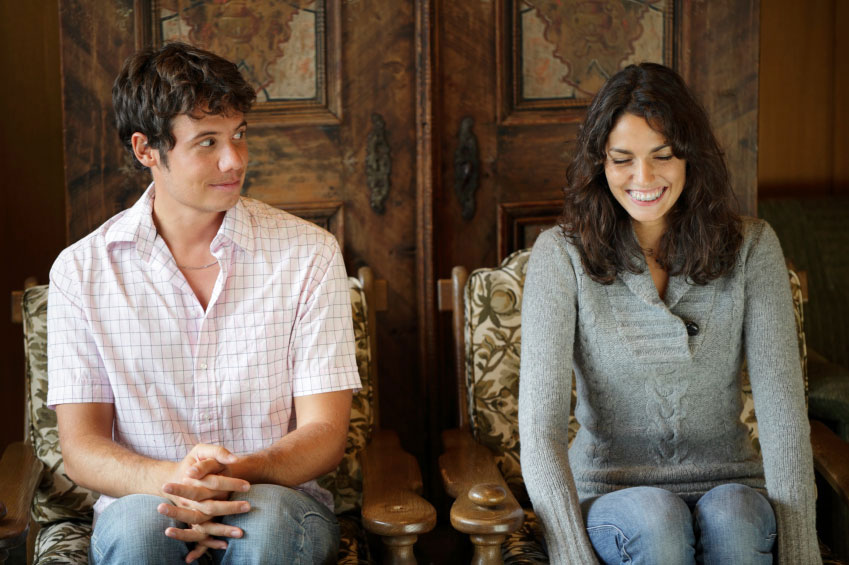 Many guys know a few lines to say to women to start a conversation, but they will often freeze up and become lost for words when talking to an attractive woman.

A fundamental part of enjoying success with women is being confident and believing in yourself when talking to a woman. If you can’t believe in yourself, a woman usually won’t accept it and would rather reject you than give you a free pass to sleep with her.

If she is experienced with relationships, she will know that guys who lack confidence around women are usually the type to become clingy in a relationship or do many of the other things that cause a woman to lose respect for a man in a relationship.

When a woman goes out to party or to socialize, she isn’t looking to meet a guy who takes the conversation extremely seriously and is worried about messing up.

She just wants you to be confident to be yourself and to let your natural sense of humor come to the surface while talking to her. She wants you to feel comfortable to flirt with her and create a sexual vibe, while not being sleazy or behaving like a jerk.

For some guys, their fear of being rejected by a woman leads to them trying way too hard to impress a woman.

This might mean putting on a fake social persona and pretending to be someone that he’s not (e.g. a really nice guy, a shy and vulnerable guy, a bad boy, a jerk or a gentleman).

However, faking about who you really are rarely works (for long) because when a woman senses that you’re not being genuine, she will put her guard up, find it difficult to trust you and won’t feel relaxed in your company.

Having relaxed confidence and being comfortable to just be yourself and not try to impress anyone is far more attractive to a woman than being a faker. Guys who try to impress women with loud, over the top behavior are very often trying to hide their lack of confidence behind an overly-confident front. For these guys, and any kind of silence will feel awkward because they’re so unsure of themselves and what they’ve got to offer to women that they seek approval by putting on a fake persona to “fit in” with others.

Some inexperienced or younger women will fall for it and mistakenly think that the guy is confident and even “cool,” but most women are experienced or socially intelligent enough to spot a genuinely confident guy from a faker.

How to Be an Amazing Conversationalist

To master the art of conversation, you need to be able to:

In addition to learn many new things to say and ways of keeping conversations going and keeping them interesting, the key to avoid awkward silences is to know that silences in a conversation are not awkward at all.

A guy who is confident in himself and socially intelligent enough to know that a silence is normal during a conversation, will be able to talk to women with the type of relaxed confidence that women are naturally drawn to.

He can be himself and let his real sense of humor and charisma come to the surface around women.

When a guy is skilled at attracting women, he will be able to make a woman feel like a real woman (i.e. make her feel girly and feminine) during conversation because he is so masculine in the way he thinks, behaves and feels. Having real inner confidence and  masculine characteristics allows him to have a presence about him that stirs a deep sexual attraction in women.

He becomes a man that women describe as a real man and when women are lucky enough to meet one of those men, they try very hard to keep conversations going with him.

Do Men Need Toughening Up or Are We Tough Enough Already?

How to Flirt With a Woman at Work