So, how can you get your ex back if she doesn’t have any feelings for you at the moment and doesn’t want anything to do with you?

What you need to do is actively CREATE some feelings again.

Sometimes, a guy will become inactive and waste a lot of time ignoring his ex in the hope that if he just stays out of her life, she might start to miss him and then contact him and want him back.

Yet, in most of the ex-back cases that I see, the woman doesn’t have feelings for the guy anymore or she’s really turned off by him and when he starts ignoring her, she just uses that time to move on.

Sometimes, a woman will contact her ex if he’s been ignoring her just to check, “Is he still missing me?” and if he is, she then realizes that he’s been using that no contact rule that everyone talks about on the internet, and she loses even more respect and attraction for him as a result.

So, if your ex doesn’t have feelings for you right now, what I recommend is that you get active.

Actively start interacting with her (via text, phone call and in person interactions) and make her feel SOMETHING for you.

You’re not going to immediately be able to make her fall madly in love with you by just sending her one text message, or saying one thing on the phone and talking to her for 10 seconds. It’s not going to be like that.

What you need to do is start to create SOME feelings and then build on that in every interaction.

If you are texting back and forth with her, rather than just texting in a boring way, get her laughing and smiling so she feels something.

For example: If a woman sends her ex-boyfriend, fiancé or husband a text and says, “Hey, what are you up to today?” and he then replies, “Nothing, how about you?” that isn’t going to make her laugh and smile and have some feelings for him.

Some examples of what might make her smile and laugh are, “I just finished a 20km marathon (or 20 mile marathon) and now I’m trying to eat four pizzas in one sitting. How about you, what are you up to?” or, “Nothing much. I got run over by a car today, but besides that I’m fine. How about you?”

In the second example there, she’s most likely going to be thinking, “What? He got run over by a car?” and she’s probably going to ask, “What happened?” and he’s going to be able to reply with, “Just kidding,” or “lol…just kidding 😛 I had a great day with no car accidents at all. Haha…how about you? Have a great day today?”

She’s then going to at least be able to have some sort of smile and maybe even a laugh. She then starts to have some feelings when she interacts with you.

Of course, sending her that one text message isn’t the magic solution to get your ex back.

To properly get a woman back, what you’ve got to get clear on is this, you’ve got to use every interaction that you have with her, whether that’s via text, on a phone call or in person, to make her feel SOMETHING for you.

You’ve got to get her to feel SOME level of respect and attraction for you.

When you make her have some feelings for you again, she starts to relax her guard. She doesn’t have to be so guarded when she’s interacting with you because there’s nothing really to worry about.

When she interacts with you, she smiles, she laughs, she feels good, so she doesn’t need to be so bitchy towards you. If she is initially cold and bitchy and distant, she’s only going to be able to keep that act up for so long.

After a while, when she continues to smile and laugh when she talks to you on the phone, interacts with you in person or texts back and forth with you, she’s going to get to the point she thinks, “Well, why am I being such a bitch to him? Why am I being cold? Every time I interact with him I feel good, so why don’t I just meet up with him?” or, “Why don’t I give this another chance?”

If this woman is really important to you and you want to get the relationship back together, then just make sure that you understand that you’ve got to be active about creating some feelings again.

If she really loves you, misses you and can’t deal with living her life without you, then she’s going to come running back if you just ignore her and you don’t do anything.

However, if your ex doesn’t have feelings for you right now, you’ve got to get active.

You’ve got to make this happen by actively making her feel SOMETHING for you.

You’ve got to get her on a phone call and you’ve got to meet up with her, and when she meets up with you, you’ve got to allow her to experience the new and improved version of you.

You don’t have to be perfect.

You don’t have to be super amazing and have achieved so many things since the breakup to make her have some feelings for you again.

You’ve just got to better.

For example: If a guy was emotionally insecure in his relationship with his girl and would get emotionally sensitive and jealous and he was controlling and all those sorts of things, then his girlfriend (fiance or wife) would have been turned off.

Insecurity, emotional sensitivity, jealousy and controlling behavior is a huge turnoff for women and you most likely already know that.

So, what is going to get her to have some feelings for a guy like that again is when she interacts with him and she can see that no matter what she says or does, he is now emotionally strong.

He is no longer the same old insecure, needy guy.

He’s gone up a level, or even a couple of levels in terms of his emotional strength and emotional maturity.

He doesn’t have to be perfect though.

He just has to be able to show her that he’s improved since the breakup. 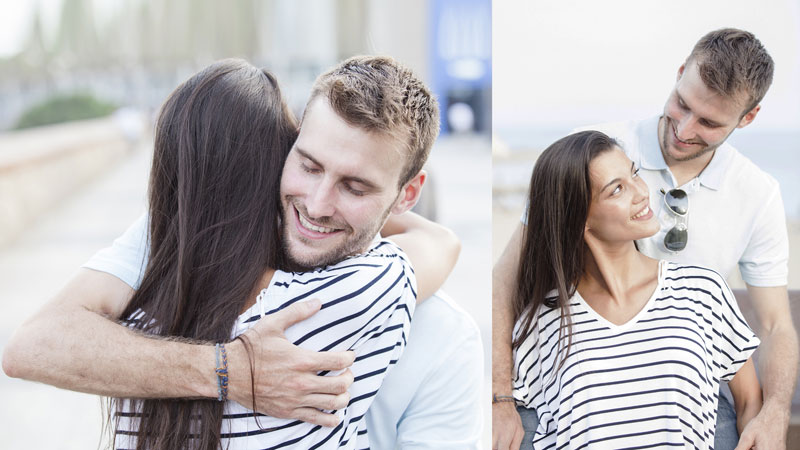 Showing her that he has improved since the breakup is not about telling her and trying to sell himself to her and saying, “Hey, I’m not needy now. I’m no longer insecure. I’m strong now.”

Instead, it’s about letting her experience the new and improved version of him and letting her notice it on her own as she listens to him talk, notices his body language and picks up on his vibe.

For example: A guy meets up with his ex-girlfriend, fiancé or wife, and he’s interacting with her and she’s being cold and distant as a test to see how he’s going to react.

If the guy then looks nervous and is doubting himself and seems uncomfortable, she knows that, “Okay…he is not emotionally strong. He still hasn’t become the sort of man that I need. He’s still weak. He still needs to improve and he’s still stuck at the same level that he was at when I broke up with him. Therefore, there’s no point in getting back with him.”

She knows that if she gets back with him, it’s just going to be the same thing over and over and over again. She also doesn’t want to have to take on the role of teaching him how to be the sort of man that she needs.

That is not the type of relationship that a woman wants to be in.

She wants to be in a relationship where she can look up to her man and respect him.

She doesn’t want to have to teach him, keep lifting him up and encouraging him to be confident or have to keep patting him on the back and saying, “It’ll be okay. Don’t worry.”

She wants him to be a strong man on his own, with or without her reassurance.

So, if your ex doesn’t have feelings for you at the moment, what you need to do is work out where you’ve been going wrong and start to make some improvements on that.

You just need to start making some improvements so she can experience that when she interacts with you. When she experiences that, she can then start to feel a renewed sense of respect and attraction for you.

She doesn’t have to keep looking down on you as a guy who isn’t ready to be the sort of man that she needs. She can see that you’re one of the rare men who make a mistake in life, learn from it and become a better man as a result.

You are a man who learns from his mistakes and becomes a better man as a result.

If you’ve enjoyed this post and you need some more help to get your woman back, I have an amazing step by step system that you can use called, Get Your Ex Back: Super System.

I tested this system out with many phone coaching clients before I recorded it into a program. It’s the only a proven step by step system to get a woman back.

You will learn exactly what to say and do to make her feel a renewed sense of respect and attraction for you, forgive you, open back up to you and give the relationship another chance.

So, if you ex doesn’t currently have feelings for you, don’t worry about that, it’s not the end of the world.

You can CREATE feelings of respect, attraction and love inside of her again.

You can do that.

You can actively make her feel something for you and then you can build on that and make her have stronger feelings for you the more she interacts with you.

The 5 Best Ways to Get Your Ex Back