My Girlfriend Looks at Other Guys

If your girlfriend looks at other guys, you have to make sure that you don’t turn it into a bigger problem than it actually is.

Either way, you have to maintain your confidence, otherwise you will cause her to either cheat on you or break up with you.

All women are going to look at other men, but it’s how you react to it that matters the most.

If you’re saying, “My girlfriend looks at other guys,” you’re probably like a lot of guys who have a very set idea about what a relationship should be like.

However, the truth is, we are all different and we all want different things when it comes to relationships.

For example: Some guys want to get married to one woman for life.

Others want to stay with one woman for life without getting married.

Then there are those who want to have many relationships with many women throughout their life, and finally there are even those who aren’t sure what they want.

There’s no right or wrong when it comes to what people want from a relationship.

Everyone is different and everyone wants different things, and this is as true for women as it is for men.

However, unlike in the past where women were forced to get married at a very young age to a man picked out for them by their father or guardian, and regardless of whether the guy was cruel, lazy or a bad husband, she was stuck with him for life.

Today, women can choose who they marry and if the guy doesn’t live up to her expectations and make her feel the way she wants to feel in the relationship, she will easily dump him for someone else.

That being said, you and your girlfriend may have fallen madly in love with each other, but that doesn’t automatically mean that either of you is suddenly going to become immune to the rest of the world, i.e. other men and women.

She Will Feel Attraction For Other Guys. That is Normal

But, if you’re still asking, “Should I be worried when my girlfriend looks at other guys?” something is clearly making you feel uncomfortable.

The question is: Is she giving you other reasons to question her loyalty to you, or are you simply feeling jealous and insecure?

Just because your girlfriend is looking at other guys, it doesn’t have to mean anything more than the fact that she’s a healthy, hot-blooded woman.

However, if her “looking” includes any of the following warning signs, it could mean that she’s losing interest in being in a relationship with you and is looking for another guy.

1. Does she insist on going out without you?

It’s normal and healthy for a man and a woman in a relationship to have interests and friends apart from each other.

You don’t want to be living in each other’s pockets, so if your girlfriend goes out occasionally to a girlfriend’s house, or to a coffee shop, etc., there’s nothing wrong with that.

However, if your girlfriend insists on going out alone, especially to clubs, bars or parties, and especially with other single women, her looking at other guys is not as innocent as she may be pretending.

When a woman is in love, going out without her guy doesn’t appeal to her.

If your girlfriend loves and respects you, she might look at other guys, but her main focus will be you and she will have little interest in going out without you.

2. Does she blatantly flirt with other guys in front of you?

Looking at other guys is one thing, but flirting in front of you is a completely different thing.

When a woman flirts with other guys in front of her boyfriend, it’s her way of crying out for help.

She’s clearly saying to her guy, “You’re not making me feel the way I want to feel when I’m with you. Either you shape up or, as you can see, I can easily get myself another guy who WILL make me feel like I want to feel.”

If your girlfriend is looking at AND flirting with other guys, she’s clearly trying to get your attention.

The question is: Are you going to sit around saying, “My girlfriend looks at other guys” and feeling like it’s all out of your control, or are you going to realize that you’re no longer making her feel respect, love and attraction for you, and fix that?

3. Does she avoid having sex, or being affectionate with you as much as possible?

Being intimate is the sign of a healthy relationship. Even if you and your girlfriend aren’t having sex, there must at least be a level of intimacy. This includes kissing, holding hands and touching.

However, if every time you try to touch or kiss your girlfriend she makes an excuse like, “Not now, you’ll ruin my lipstick” or “Stop. I’m not in the mood” she’s probably pulling away from the relationship and her looking at other guys is her way of simply seeing what type of guys might be available to her as a replacement.

4. Does she make excuses not to see you?

When a woman is in love, she will do whatever it takes to make herself available for the man she loves, because being around him makes her feel good about herself.

Of course, we all get busy sometimes.

Not being able to see you because she’s studying for important exams, or has a huge project at work, is understandable.

Yet, if your girlfriend is making excuses not to see you ALL the time, you need to pay attention to the warning bells.

Is There Something About Your Behavior That is Making Your Girlfriend Look at Other Guys? 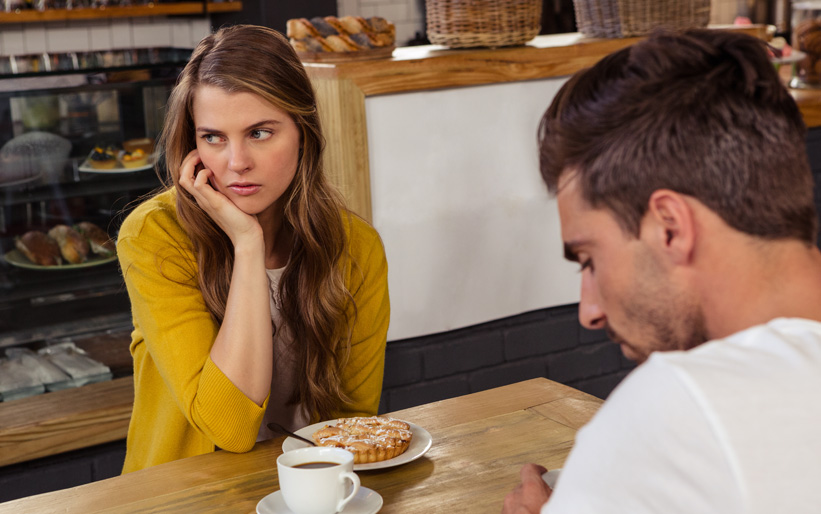 It is perfectly okay for your girlfriend to want to look at other guys, as long as she’s giving you the love and respect you deserve.

Yet, if she’s saying and doing other things that are making you question her loyalty to you, then this indicates a more serious problem with your relationship.

Right now your natural reaction might be to get angry, but ask yourself, “Is there something about my behavior that is causing my girlfriend to lose love, respect and attraction for me?”

By answering these questions honestly, you can pinpoint any problems in your relationship and then you can fix them before it’s too late.

What you need to understand, is that the romantic love between a man and a woman is not unconditional and there are no guarantees that it will last.

It is your job as the man, to maintain and grow the respect and attraction your girlfriend feels for you, to ensure that the love between you will deepen over time.

Rather than waste time saying, “My girlfriend looks at other guys” and feeling like your relationship is spinning out of control, you can learn how to make your girlfriend fall deeper and deeper in love with you.

You can learn how to make her feel increasingly more attracted to you sexually and have a deep and loving respect for you as a man. Doesn’t this sound like something you would rather have happen to you than worrying about her looking at other guys?

My Girlfriend Wants to Have a Girls Night Out

Is My Girlfriend Cheating? 6 Mistakes to Avoid if You Think She is