How to Be One of Those Happy Couples Who Never Fight

So, how can you be one of those happy couples that never fight?

You might have seen those couples that always get along and they always support each other.

They’re always so happy together.

No matter what they face, they always keep a positive attitude and work through the situation together and come out stronger as a result.

The thing is, it’s not possible to never ever disagree on something with your woman.

You’re going to have disagreements and sometimes you’re going to misunderstand each other, but when you have the right foundation in place in your relationship, it won’t turn into a big problem.

For example: If your woman respects you, feels attracted to you, is in love with you and you have great communication together, she’s going to have a much higher tolerance to work through a problem with you rather than just getting angry, throwing her hands up and saying, “Screw this. This relationship is too stressful. I don’t want to do this. I’m out.”

However, if you’re in a relationship where your woman doesn’t respect you, she doesn’t feel attracted to you anymore, she’s not really in love with you and the communication between you and her doesn’t flow very well, then when you and her experience problems together, she’s going to have a much lower tolerance to put up with it.

If a woman is really happy, she’s going to be willing to put up with a few bumps along the road, a few obstacles to overcome, a few hard times, but if a woman isn’t happy in the relationship then her tolerance is going to be low. 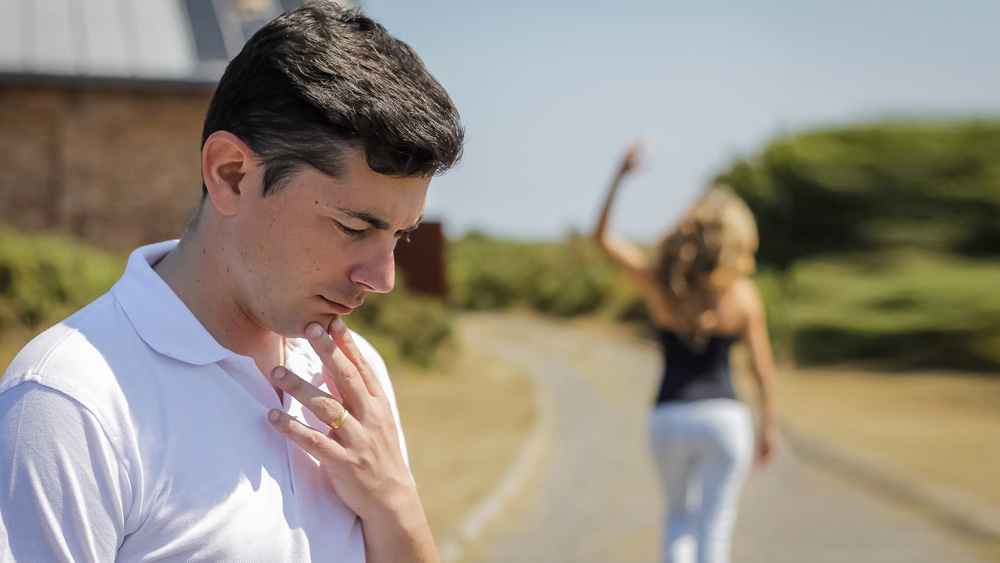 She’s not going to be willing to put up with a lot before she decides to either cheat on her guy and then leave him or just dump him and start anew.

Most relationships start off pretty well.

The man and woman are attracted to each other, they’re interested in each other and they start kissing and potentially having sex very early on.

They go to dinner dates, go watch movies together and maybe go on holidays and vacations. They meet each other’s friends and family and it’s all great.

There are so many good feelings going on at the start.

Yet, all of that stuff doesn’t count for much at all, if later on in the relationship, the guy starts to change.

If the guy starts becoming argumentative when he’s talking to his woman and starts demeaning her or can’t handle it when she tests his confidence by saying something mean to him, then the whole relationship dynamic starts to change.

Yet, when you think about the couples who are always happy together and they don’t get into arguments, the guy will be very easy-going.

He’s not going to react and get angry and emotional when his woman says or does something.

He’s going to be easy-going.

He’s going to maintain control of his emotions and he’s not going to turn it into a big deal.

On the other hand, when couples get into fights all the time and can’t really seem to get along after maybe two or three years together, it really comes down to the fact that the guy doesn’t know how to react and respond correctly when his woman tests him, throws a tantrum, changes her mind all the time and essentially tries to stir the pot.

By throwing a tantrum, she’s trying to make something happen. She’s testing to see how he’s going to react and if he reacts by getting angry or sulking or getting into a huge argument with her, then she starts to become distant.

She withdraws some of her affection and she doesn’t look at him the way that she used to.

When a guy is faced with that type of situation in a relationship, he may become insecure and start to be jealous and controlling and needy, or he might start to become angry and really tell her off for changing and not behaving the way that she used to.

Yet, none of those approaches don’t work.

So, what does work?

What does work is being able to be that confident, easygoing guy that doesn’t react in a huge burst of emotion when his woman says or does something.

You maintain control of your emotions.

That is something that I provide many techniques and examples for in my program, Make Her Love You For Life

If you watch or listen to the program, you’ll learn exactly how to keep a relationship happy, in love and passionate for life.

It’s actually very easy to do, but most guys don’t get this education when they’re growing up.

It really depends on what role models they have around them.

Yet, a lot of guys don’t get that education.

As a result, a lot of guys get into relationships with women and at the start it seems all fine, but then the spark dies out.

What I can tell you from my personal experience being in a happy marriage that gets better and better all the time is that it’s actually easy.

Once you know what you’re doing, it’s actually very easy to make a woman love you and be totally committed to you for life, but if you don’t understand how to react and respond to women, relationships are difficult to maintain.

For example: If a woman throws a tantrum and the guy doesn’t know how to respond to that and he gets angry or soaks or he turns it into a bigger thing than it is, then that’s a huge waste of time and energy for him.

It also turns her off.

She doesn’t want to get that sort of reaction from him.

However, if he’s able to maintain control of his emotions and turn it into something that makes them love each other more and feel attracted and feel more respect for each other, then that’s a good time.

The relationship gets better and better over time.

This is just one example, being one of those couples that never get into arguments.

There is much more to relationships than just that.

It’s also about maintaining and building on a woman’s sexual attraction for you.

A lot of guys find that their relationship with a woman is great at the start, but then the spark dies. They end up feeling more like friends.

That’s not a good time, because there is no sex happening. There’s no affection.

For the guy being cheated on in those situations, that’s not a good time.

Yet, have a think about that 39% statistic there.

You CAN have a relationship where your woman doesn’t cheat.

You can have a relationship where the respect, attraction and love deepens over time.

You can also be one of those couples who are happy and never fight with each other.

You’ll have things that you disagree on, and there will be misunderstandings, but it won’t be a fight.

It’ll just be a misunderstanding and then it turns into something to laugh about and feel good about and you fall more in love.

You feel more respect for each other, you feel more attracted to each other and your relationship gets better and better over time.