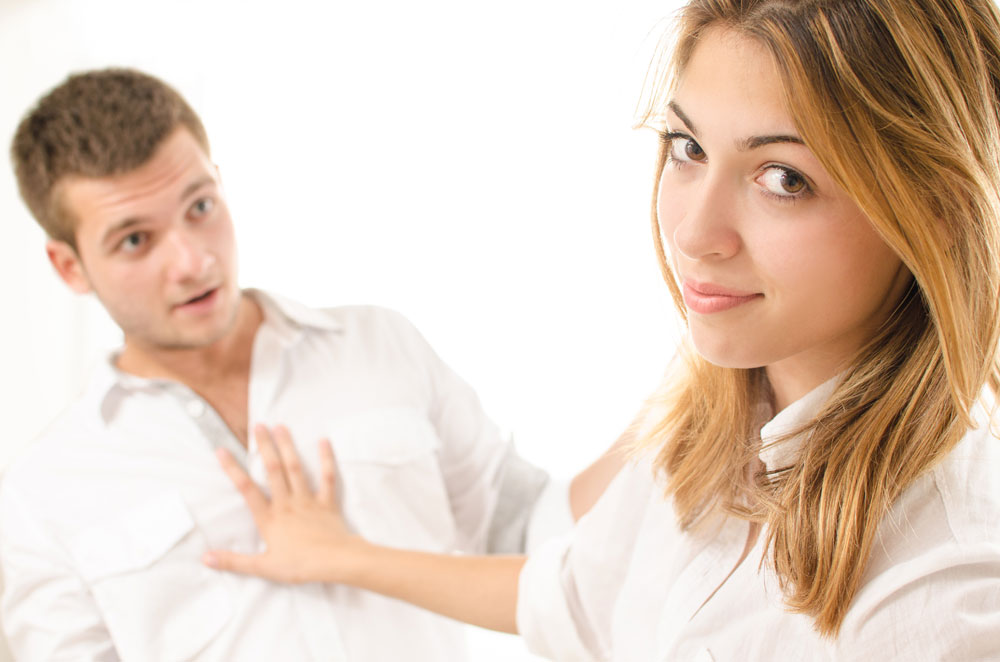 How to Please a Woman: Mistakes Guys Make

As long as you are making a woman feel sexual attraction for you and being the sort of guy that she can respect, she will be easy to please.

However, if the way that you interact with her doesn’t cause her to feel much sexual attraction and makes her lose some respect for you, she will complain about feeling bored around you.

Many men want to know how to please a woman because no matter how hard they’ve tried in the past, they just can’t seem to keep a woman interested for very long.

It doesn’t matter if it’s when they first meet a woman, go out on a date, when they get her into bed or even if they’ve made it as far as being in a relationship; their mistakes will spoil a good thing. Here are the most common slip-ups that guys make around women, which you should try to avoid…

Mistake 1: Being too shy

A man sees a woman and he wants to go up and talk to her but he’s so nervous and shy that he hesitates.

A woman recognizes when a guy is checking her out but if he doesn’t make his move, she’s going to realize he’s not the type of confident alpha male that she’s interested in. So even if he eventually builds up the confidence to approach and speak to her, she will have already lost interest and will likely dismiss or ignore him.

Even if a guy does have the nerve to talk with a woman, if he tries too hard to get her to like him, he’ll blow it. Thinking that this is how to please a woman, he’ll be too nice. He’ll laugh too hard at her jokes, be too polite, watch his language for fear of offending her, compliment her too much and generally will be too considerate and eager to please.

Women like a challenge. If she knows she can walk all over a guy, she will either walk away or use him.

Why do women like a guy who is a challenge? Watch this video by Dan Bacon (founder of The Modern Man) to find out…

Although it’s a common choice, deciding to go to a movie as a first date activity is never a good idea unless it was preceded by a pre-movie time that the couple got together and developed a sexual rapport. Just sitting next to someone you don’t know well for a couple of hours is not interactive and it won’t create an atmosphere that allows for an intimate exchange.

A man needs to allow time to create the right type of mutual sexual chemistry. That way when the couple hits the theater, it will be primarily so they can get it on in the dark rather than watching the flick.

Mistake 2: Boring Her With Safe Conversation

Here’s a great video by Dan Bacon (founder of The Modern Man), which explains where a lot of guys go wrong when talking to women and what you should do instead…

There are several ways that guys can bore their date. If they start rambling about subjects that don’t interest the woman, that’s one of the most common mistakes guys make.

For instance if a guy starts speaking in great detail about a sporting event that his date has no interest in or a TV show or movie she’s never watched nor wants to, neither is a great conversation topic. This type of one-sided monologue doesn’t engage a woman.

She’ll get bored and will start fiddling around with her phone checking messages and texting, start looking around the room, yawn or generally seems to “glaze over.”

Those types of tedious conversations don’t let a man exhibit his cheeky charm and sexuality that would make her want to sleep with him. So if you bore a woman like that, she will be more likely to check out of the date rather check into a room with you for some afternoon or evening delight.

On the opposite end is not beginning an interesting conversational exchange. This often happens when guys don’t know what to talk about so they start asking their date question after question. This will make her feel as if she’s on a job interview rather than a date.

Good conversations must be give-and-take on topics that interest both parties. If you want to know how to please a woman, remember that the right words are powerful. Speaking to her in a funny and suggestive way with the proper dose of confidence and sexual innuendo will absolutely turn her on in public so that she can turn you on in private.

Men often think that all they have to do to excite a woman in bed is to occasionally change positions. They’re wrong. It takes more than that.

If you want to know how to please a woman, know this – women want and need more than a simple position change.

Sometimes they want it hard, sometimes fast, sometimes slow and sometimes tender. Women are emotional creatures and adding variety to how you make love is an emotional experience for them. It’s what brings them greater excitement and more orgasms because they don’t know what is coming next. Playing “who’s on top” just won’t cut it.

Too many men don’t understand how a man’s deep, sexy voice turns a woman on, so they don’t speak during sex. Oh, some will ask when it’s over, “Was that good for you?” and if they have to ask, it wasn’t good for her. A man should know when a woman enjoyed getting laid.

If he has to ask, anything she answers is a lie to spare his feelings. Then again, it likely will be the last time he will ever have to ask her that question because he won’t get another chance to speak to her in bed.

If man starts to question his girlfriend (or wife’s) every move, if she has to check in with him whenever she’s out of his sight for longer than a couple of hours, if she has to work late and he doesn’t believe her or he shows any other irrational form of jealousy, that is a huge mistake.

The woman in your life believes that you are a strong, confident alpha male and she wants to be with you. However if you start mistrusting her, especially without cause, then you are showing that you have become a weak man – a man that she will question why she is still with.

That type of mistrust will eat at your relationship and in time you won’t have to worry about where she is any longer because she’ll be gone and out of your life.

Too many men, once they are in a relationship, will act as if they have nothing else to strive for. They have a job and they have a woman – what more could they possibly want? That’s a major error. That lack of passion to achieve his best possible life will start to seep into his relationship.

Seeing this disturbing complacency, his woman will wonder when the fiery desire in her man to want more burned out and soon her dissatisfaction with him will cause their relationship to cool off as well.