Should Men Pluck Their Eyebrows?

Women don’t expect us men to look pretty and perfect like them. Masculine beauty is about being more masculine, not more feminine. It’s fine to take care of your physical appearance and dress well, but you don’t need to pluck your eyebrows.

If you want to be attractive to women, you have to focus on being confident, charming and charismatic…not pretty like a girl.

Personal grooming is important, not just for your own health, but also to show women that you are sane enough to take the time to be clean, smell fresh and look presentable. A woman will always look to see if a man takes care of himself, but you don’t need to go as far as plucking your eyebrows.

However, this is not what the billion dollar male grooming industry will tell you. They will encourage you to moisturize, get manicures and pedicures, wear subtle lip gloss, wear cologne and use a shampoo that will give your hair more bounce.

All of this extra primping and preening is not helping men to attract, meet and date women. Instead, it is just making men appear less attractive to women because women are attracted to the raw masculinity of men and when that is stripped away, a guy loses his appeal.

Masculine beauty is about your roughness, your toughness and your manly vibe. If you focus too much on looking pretty and perfect for women, you will end up being attractive to some gay guys who will see that you’re a confused guy who can’t attract women.

What Plucking your Eyebrows Says About You 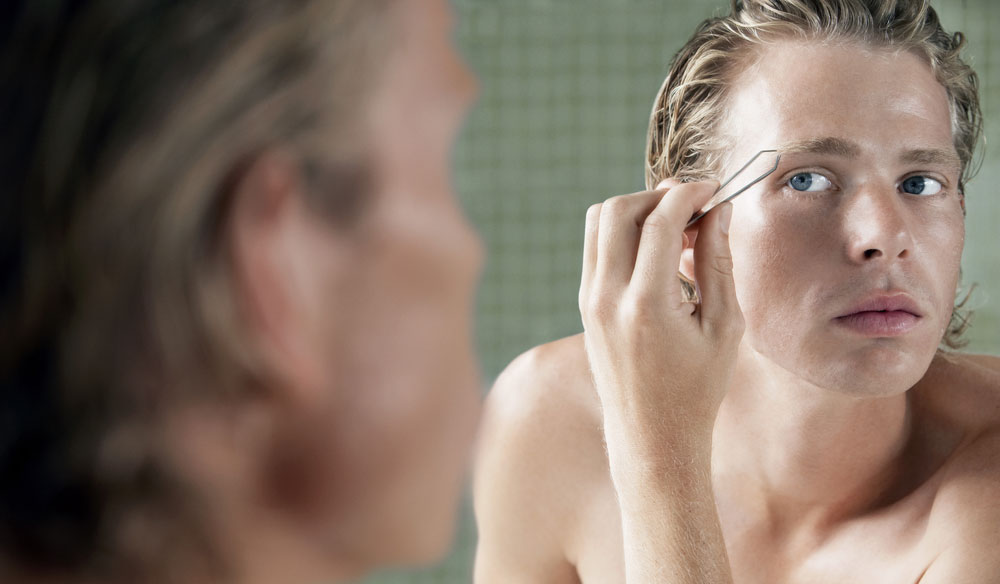 Plucking your eyebrows can suggest to a woman that…

Let’s face it, plucking your eyebrows is a fairly gay thing to do because gay guys do it to look more feminine.

If you meet a woman and she has to spend time trying to work out whether or not you are gay, she is going to find it difficult, if not impossible, to feel properly attracted to you.

You will be missing that raw masculinity that instantly tells her you are a man who only accepts sexy women. She won’t have to think about it or try to work it out; she will know instinctively that you’re not a fag.

2. You think that a woman’s attraction for a man is mostly based on his physical appearance

Some women will only accept a very handsome man who looks like a male model, but the majority of women place less importance on a man’s physical appearance and are mostly interested in how his personality and behavior makes her feel.

Watch this video by Dan Bacon, the founder of The Modern Man, to learn how attraction between men and women really works…

3. You are confused about your role in the mating dance

It has been this way for hundreds of thousands of years and it’s not about to change now; no matter how hard the cosmetic and fashion industries try to convince you otherwise. If you are trying to attract women by using your looks as your main weapon, you are doing it wrong.

It doesn’t matter if women say, “I only date handsome men” or “Ewww…look at your bushy eyebrows, you should pluck them” and try to convince you that it’s all about looks.

What women say that they want and what they actually feel attracted to are usually two completely different things. Women will often tease a man about his physical appearance as a way of testing whether or not he understands how to attract women properly, or if he is just another confused peacock.

4. You have way too much time on your hands

Women are very perceptive and intuitive to boot. They will deduce all manner of foregone conclusions about you based on their first impression of you; and all this even before they have spoken to you. If they see that you spend all your time preening, having your nails manicured, your eyebrows plucked and getting facials, they will automatically take this as a sign that you have way too much time on your hands and are not very ambitious.

Whether this is actually an accurate assessment of you or not is irrelevant because as far as she’s concerned, if you spend more time worrying about your looks than living your life then you are not likely to have any serious plans for the future. And a man without a future is definitely not worth the time and effort.

5. You’re insecure about your attractiveness to women and believe that preening like a girl will make women like you

Women are attracted to guys who exude confidence, not insecurity. If you are overtly primped and preened women will begin to wonder what you are trying to hide.

If your bushy eyebrows are a sensitive matter with you, a woman will begin to wonder what else you’re insecure about. Ultimately, your insecurity and lack of self confidence is a bigger passion killer than any bushy eyebrow can ever be.

6. You don’t know how to be what women refer to as a real man

Attract Women With Your Personality, Not Your Eyebrows

For example: Are you confident or insecure? Do you know how to be a man or are you another confused guy who thinks he needs to pluck his eyebrows to attract women?