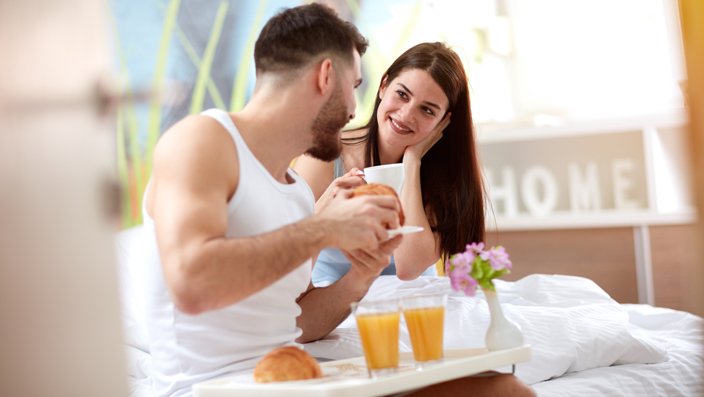 So, how can you know if the girl that you’re dating is the right one for you?

Sometimes you start dating a woman and you’re having sex with her and it feels good at the start, but eventually, she shows you a side of herself that you don’t really like.

Then you start to think, “Is she the right girl for me? Should I start dating other women at the same time? Should I dump her, or should I stick with it and see if it gets better?”

What should you do?

How do you know if the girl that you’re dating is the right one for you, she’s worth sticking with and if you settle down with her, you would be happy with her?

Well, based on more than a decade of my own personal experience enjoying my choice of women and now having settled down with my perfect girl, here are 4 ways to know if the girl that you’re dating is the right one for you…

1. She treats you well, loves you, cares about you and is interested in your life

If you’re going to get into a committed relationship with a woman, then you shouldn’t accept anything less than that.

If she doesn’t live up to those type of qualities, she doesn’t deserve to be your girlfriend.

Of course, if you’re just sleeping with a woman for something to do, for a bit of fun and you don’t have any plans of sticking with her, then you don’t really need to worry about those things.

As long as you’re enjoying the sex and enjoying each other’s company, everything is fine.

Yet, if you’re going to have a committed relationship with a woman, then she should treat you well, she should love you, she should care about you and she should be interested in your life.

You shouldn’t accept anything less than that.

The way that it works is that when you are a good guy and treat your woman well, but also expect her to treat you well, love you, care about you and to be interested in your life (or else you won’t want to remain committed to her), then it brings out the best side of her.

She wants to be a good girl for you because you are being a good man for her and you also behave in a way that makes her look up to you and respect you.

You don’t allow her to walk all over you, to treat you badly and to not care about you and take any interest in your life, just so you get to be with her.

You’re not one of those type of guys.

When a guy is willing to accept a woman’s bad behavior and he’s always trying to hopefully get her to love him by doing more and more for her and being super interested in her life, it brings out her bad side.

So, if you are dating a woman that you find attractive and that you want to be with and she also treats you well, loves you, cares about you and is interested in your life, then she’s a keeper.

2. You don’t secretly think about leaving her for another woman

No matter how hot your girlfriend or wife is, you will always look at other women and find them attractive.

Yet, when you are with the girl who is the right one for you, you will look at other women, find them attractive, but not want to be with them.

So, when a guy is in a relationship with a woman that he’s not sincerely attracted to and he’s only with because he can’t get anything else, he is too afraid to leave her or needs someone to help pay the rent or something like that, then he will be looking at other women, finding them attractive and wishing that he could be with them instead.

Now, there is an exception to this.

Sometimes a man is in a relationship or a marriage with a woman who is the right woman for him, but they’re no longer having sex anymore.

Sex is infrequent or it’s not happening at all.

In cases like that, a man will start to look at other women, find them attractive, want to have sex with them and even want to leave to be with the other woman.

In cases like that, it doesn’t necessarily mean that the woman he is with isn’t the one for him.

If he wants to, rather than leaving her, he can instead fix the sexual attraction problem in the relationship and as a result, things will get back on track once again.

In order to do that, he needs to start to make some subtle changes in the way that he interacts with his woman, so he creates a dynamic in the relationship that naturally makes them both feel sexually attracted to each other.

So, in terms of dating, if you’ve been dating a woman for 3 months and you’re not looking at other women wishing that you could be with them, then she could be the one for you.

If you’ve been dating her for 6 months and you’re still not looking at other women wishing that you could be with them, then she really could be the one for you.

If you’ve been with her for a few years and you’re still not looking at other women wishing that you could be with them because you’re so happy with her, then she’s almost certainly the right girl for you.

So, you’re safe to settle down with a girl like that.

Of course, you don’t have to settle down if you don’t want to.

Not every guy has to settle down and be with one woman and stick with her for life, but I can tell you from my personal experience enjoying my choice of women for over a decade that it was a lot of fun sleeping with loads of different women and having 4 or 5 women in my life at once, but it’s just as fun and sometimes even more fun being completely settled down with my perfect girl.

So, if you’ve been dating a woman for a while and you’re not secretly planning on replacing her if you can find another girl, then she’s probably the right girl for you and if the relationship continues to get better and better over time, then you and her have a really good chance of sticking together for life.

3. She is your type physically and emotionally

If a woman isn’t really your type physically or emotionally, then you will get bored of having sex with her and spending quality time with her.

As a result, the relationship will start to feel awkward and forced for the both of you.

Yet, when you are with a woman who is your type, physically and emotionally, you will naturally find her attractive, treat her well and want to progress to further levels in the relationship.

You will want to build a future together.

So, if you’re dating a woman and you find yourself losing interest in treating her well or you stop finding her attractive, then it’s almost certainly a sign that she’s not the right girl for you.

Every man can make his own choice, but what I recommend is that you only settle down with a woman that you’re honestly, sincerely attracted to.

If you’re not honestly, sincerely attracted to her then you’re not going to have a good time with her in the long run.

4. She loves you the way that you are, but you also feel inspired to become an even better man because of her

Every man has the opportunity to improve himself and become an even more effective man as he goes through his life.

He doesn’t need a woman to be the inspiration for that.

However, a woman can be one of the things that really inspires you as a man to become even better and more effective as a man than you already are today.

As a result, the relationship will work.

Both of them will be completely committed to the relationship.

They will be honestly, sincerely attracted to each other and they will go on to build a great future together.

So, if you’re dating a woman and she loves you for who you are right now, but you also feel inspired to become an even better man because of her, then she’s almost certainly the right girl for you.

She’s bringing the best out of you and as long as you don’t accept bad treatment of you and bad behavior towards you, then you’re going to bring out the best in her.

She’s going to feel inspired to be a good woman for you.

If you’d like to learn more, I have 2 recommendations for you.

The first recommendation is my eBook The Flow, which is also available on audio (The Flow on Audio).

The second recommendation is my program, Make Her Love You For Life, which is available on video or audio.

When you watch or listen to the program, you will learn exactly how to make your woman respect you, feel sexually attracted to you and be totally in love with you for life.

One final point that I want to make for you in this video, is to point out the fact that this is your life and you get to decide how it plays out.

If you accept women that you’re not honestly, sincerely attracted to, then you are not going to live the best life that you could live.

You’re going to end up feeling unhappy with the woman that you have.

You’re going to be looking at other women wishing that you had them and feeling down about yourself.

Every man can choose to do whatever he wants with his life, but when it comes to relationships with women, I recommend that you don’t cheat yourself out of having a woman that you’re honestly, sincerely attracted to.

Additionally, if you’re going to commit to a woman, make sure that she treats you well, loves you, cares about you and is interested in your life.

Don’t accept anything less than that.

Attracting and Dating a Woman Who is Out of Your League

3 Practical Tips on How to Get a Girlfriend