How to Get a Woman to Sleep With You

In this post, I’m going to explain the natural process of how to get a woman to sleep with you.

The first thing that you need to understand and accept is that we men need to go through a different process than women do when it comes to sex.

For women, it is very easy to attract men for sex because most men are willing to have sex with a woman simply based on her appearance.

Most guys (approximately 95%) will have a sex with a physically attractive woman, even if they don’t like her personality or have no intention of having a relationship with her.

However, most women don’t work the same way.

Most women will not have sex with a guy simply based on his appearance because they place more importance on how a guy’s personality makes them feel.

Most women also want to have the experience of feeling a build up of sexual tension (this can take minutes, hours or days depending on the situation) before they feel ready to release that built up tension with kissing and sex.

So, here is what you need to do to get a woman to sleep with you…

1. Make her feel attracted to your personality and inner qualities

While it is true that women can feel attracted to superficial qualities about men like looks, height, money and social status, most women are willing to have sex with a guy who has other attractive qualities.

For example: If an average looking guy meets a woman and makes her feel attracted to his confidence, charisma, ability to make her laugh and his masculine vibe that makes her feel girly and feminine compared to him, she will almost certainly be willing to sleep with him if he plays his cards right.

Watch this video to understand how a woman’s attraction for a man really works and how you can use it to get a woman to sleep with you, even if you’re not tall, rich or handsome…

As you will discover from the video above, a woman’s attraction for a man works a lot differently than most guys realize.

While there are some very picky women out there who will only sleep with a tall, handsome rich guy, the majority of women in this world are much more flexible about what they find sexually attractive and appealing about a guy.

2. Build up the sexual tension between you

This is why it’s so important to build up some sexual tension between yourself and the woman you want to sleep with.

Essentially, you make her feel attracted to you and then also make her have to work to impress you some more before she fully wins you over and gets to kiss you or have sex with you.

Women refer to guys like that as a challenge…

As you will discover from the video above, most guys are willing to sleep with a woman right away and don’t require any build up of sexual tension.

If the woman is physically attractive, most guys don’t want to waste any time or risk losing their opportunity with her, so they show a lot of interest and hope to be liked for being a really nice guy or treating her well.

Yet, that’s pretty much all a woman experiences as she goes through life and it is very boring for her.

By being a bit of a challenge to win over, you’re actually giving a woman what she really wants and if you give her what she wants, she will give you what you want.

3. Create a unique connection between you and her

A lot of guys get stuck at this point.

They start talking to a woman, but quickly run out of things to say or struggle to keep the conversation going and keep it interesting.

4. Kiss her and then proceed to sex

The most important step before sex is to kiss a woman.

It sounds pretty obvious, but a lot of guys hesitate at this point and then wonder why their interactions or dates fizzle out and never seem to lead to sex.

You’ve got to get to the first kiss because it changes the dynamic from being innocent and playing to being intimate and sexual.

Once a woman has kissed you, she is much more likely to be willing to sleep with you that night, on the first date or at the latest on a second date.

I know that from a lot of personal experience and also from surveys and studies. For example: A study in the USA found that 55% of couples had sex on their first date and a European study found that 70% of women admitting to having experienced a one night stand before.

So, don’t think that the woman you are talking to is an innocent angel or a clueless virgin. These days, most women have regular casual sex and get in and out of relationships until they find the perfect man for them.

How Will You Know if a Woman Wants to Sleep With You? 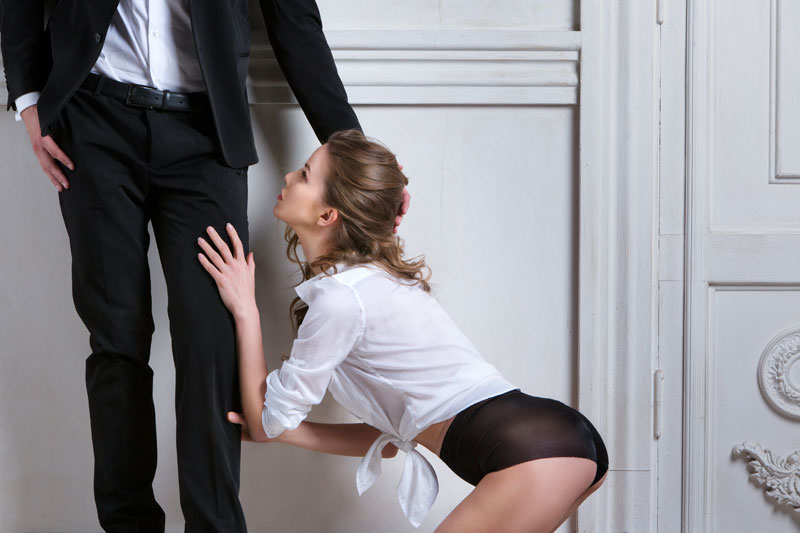 As long as you follow the basic process that I’ve outlined in this post, a woman will want to sleep with you.

However, women aren’t all exactly the same and they will think, behave and act in different ways under different circumstances.

For example: Sometimes you will meet a woman who is really attracted to you and wants to sleep with you, but she will pretend as though she isn’t very interested and will then play hard to get.

Why would she do that to you?

As you can see, there are many different reasons why a woman will play hard to get when you are leading up to sleeping with her.

To be successful at getting women to sleep with you, you must arm yourself with the ability to attract women so they actually want to be with you and you also must have the confidence to stay in an interaction and keep moving forward until you actually get to the point of having sex.

Sometimes, it will happen very easily where you meet a woman, make her feel attracted and begin kissing her right away. You then leave the bar, club or party with her and take her home to sleep with you.

However, other times, it can take 1-3 hours of hanging out together or partying before a woman will be willing to kiss you and leave a venue to go home and sleep with you.

In terms of sleeping with a woman on a first date, most women that you will meet are going to be open to it as long as you have established enough attraction and have the confidence to move from one step to the next with her.

Yet, some women will want you to wait 2-4 dates, especially if you are courting her in a way where she gets the impression that you want to be her boyfriend or husband in future.

If she senses that you have serious, long term intentions with her, she will instinctively change her approach to sex and want to show you that she has the willpower to resist sex, so you will then be able to trust her to control herself around other guys when you are in a relationship with her.

A final thing to point out here on the topic of how to get a woman to sleep with you is to always remember that sex is enjoyable for both men and women.

You’re not taking anything from a woman by allowing her to have sex with you.

If you make her feel attracted to you and there is a build up of sexual tension between you, she is going to want to release that with kissing and sex.

It’s not just you who is going to want to have sex. It’s a mutually enjoyable experience.

So, don’t ever get into the mindset of thinking that women are doing you a favor by sleeping with you.

Guys who think that way are usually the type of guys who don’t even know how to attract women during an interaction and are simply hoping to “get a chance” with a woman by being really nice to her or being a good friend.

If you want to get a woman to sleep with you, the first thing you must to is make her feel attracted to you in a sexual way, not a friendly way.

If you then build up some sexual tension between you and her (that can take anywhere from minutes to hours to days, depending on the situation), she will feel a strong desire to release that built up tension with kissing and sex.

When you do have sex, it will be a mutually enjoyable and pleasurable experience. She’s not doing you a favor or giving you a chance.

How to Make Women Fall in Love With You