Is it Okay to Cry in Front of Your Girlfriend?

In most cases, a woman will lose respect and attraction for a guy who cries in front of her. However, there are exceptions, which we will discuss throughout this post.

The first thing we need to get clear when answering the question, “Is it okay to cry in front of your girlfriend?” is to understand the dynamic between a man and his girlfriend when they are in a relationship.

Naturally when a guy is single he will behave differently to when he is in a relationship. Of course, a man’s fundamental beliefs will always stay the same, but some guys who have no, or little, experience with women, will “put on an act” to initially attract a girlfriend.

Once they settle into a relationship, all the qualities that attracted her to him begin to fade away. For example, a guy might pretend to be more confident, masculine, strong and in control than he really is, but when he settles into the relationship “comfort zone” he allows his insecurities and fears to come out.

Which brings me back to the question: Is it okay to cry in front of your girlfriend?

Jason is a single guy.

One day he’s at a party with some friends when he spots a beautiful woman. The first thing that goes through his mind is, “Wow! She’s really hot! I’d definitely have sex with HER!” Casually he walks up to her and starts a conversation.

He’s funny, interesting and flirts with her creating sexual attraction between him and her. Her name is Donna. Slowly Jason starts thinking, “I really like her. I want her to be my girlfriend.” He asks her out on a date and she accepts. Soon Jason and Donna are a couple.

Jason’s friends are jealous because they can’t believe Jason managed to get such a beautiful woman to be his girlfriend. In the beginning while they are still dating Donna wants to impress Jason, so she makes an effort to please him by always looking beautiful, wearing make up, doing her hair and taking care of her figure so that she can retain the attraction between her and him. She feels lucky to have such a strong, masculine guy interested in her and she is doing her best to make him her boyfriend.

However, over time things change…

As soon as Jason and Donna settle into a comfortable relationship, Donna starts letting herself go. Instead of dressing up, she hangs around in an old, dirty tracksuit all day. When they go out together she never wears make up anymore and she always wears boring clothes that aren’t flattering.

Worst of all she eats all day. Suddenly her hot body turns to fat. Jason feels turned off by her now and he avoids wanting to have sex with her and he doesn’t go out in public with her anymore.

As you can see, all the things (her looks) that attracted Jason to Donna are no longer there. The thing is, Jason is not being shallow. It’s just a fact that men are mostly attracted to a woman’s physical appearance and how that makes him feel.

When a woman lets herself go, a guy may stop feeling attraction for her and the relationship will then suffer.

Now let’s look at a scenario from the woman’s perspective.

Frank and Cindy meet in much the same way as Jason and Donna. Cindy is really beautiful and most guys think she’s quite a “catch.” Frank on the other hand is just an ordinary guy (maybe even a little bit ugly).

In fact, Frank is so unattractive physically that a lot of other guys see him with Cindy and wonder, “What has he got that I don’t? Why would a beautiful woman like her choose HIM?”

Cindy would say, “Frank is SO confident. He’s a real man who knows how to make a woman feel safe and taken care of.” You see, what has happened between Cindy and Frank is a classic example of what happens between men and women ALL the time.

When Frank approached Cindy he behaved in ways that made her feel instant sexual attraction for him. What she didn’t realize at the time was that Frank was only “pretending” to be confident, self assured and mentally and emotionally strong.

Deep down Frank feels shy, insecure and nervous around beautiful women. However, as luck would have it, Cindy fell for him that night and soon they were boyfriend and girlfriend.

Then things began to change…

If someone upset him; Frank would CRY. In the beginning Cindy would comfort him. She’d think, “It must have been a really bad day. I’m sure Frank won’t do this again.” However, Frank began to cry over things that 99% of men wouldn’t even get watery eyed over. 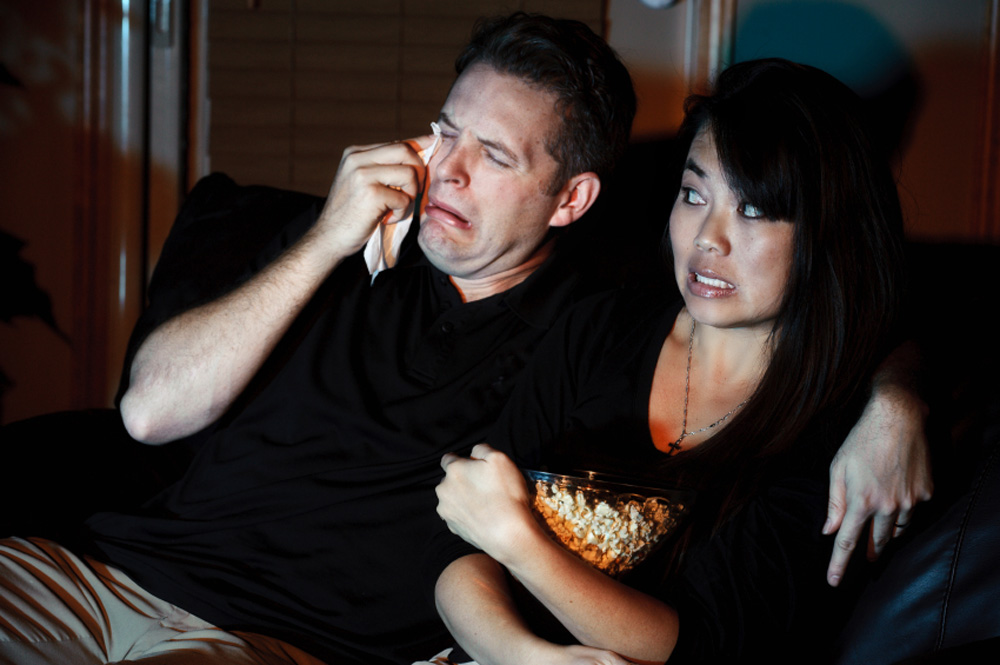 Whether he was watching a sad movie or if his boss was being difficult with him at work, he’d cry. Eventually, Cindy and Frank started fighting; and guess what? Yes, Frank would CRY! Eventually Cindy had enough and she broke up with him (and yes he cried then too and begged her to stay).

Yet, WHY did Cindy break up with him?

Was it because she was a cold hearted bitch?

Just like Donna stopped making Jason feel attraction for her by letting herself go, in the same way Frank stopped making Cindy feel the way she wanted to feel. In the beginning Cindy was attracted to the strength in Frank.

She felt attraction for his confidence, masculinity and mental and emotional strength. When Frank started behaving like a woman, Cindy began to feel insecure in the relationship. She began to lose respect for Frank as a man and finally she stopped feeling attraction for him too. This is normal. Women are attracted to the strength in men and repelled by weakness.

And this is why real men don’t cry in front of their girlfriends over minor, insignificant things.

Of course there are always exceptions to any rule.

For example: When a close loved one, such as a parent, grandparent, sibling or close friend dies, it’s perfectly okay for a guy to cry at the funeral or get watery eyed. A few tears can even be considered a good and healthy thing and a woman will not lose sexual attraction for her man because of it.

Another example of when it’s okay for a guy to watery eyed in front of his girlfriend is when he achieves something great, like receiving a great award or accomplishing a great feat (climbing a mountain, crossing an ocean solo, winning a gold medal, etc.). In cases such as these getting watery eyed (but not crying) in front of your girlfriend will not diminish her attraction for you.

However, if you cry, sob and loose control of yourself, she will more than likely turn away and wait for you to regain control of yourself. She won’t want to see if you in that emotionally weak state because women aren’t attracted to emotional weakness.

Getting watery eyed because you are real enough to feel emotions is different than crying uncontrollably. If you carry on too long she will naturally start thinking, “I wish he’d stop crying now. He’s behaving like a girl.”

Be the Strong Man That She Needs

I hope that by giving you the above scenarios I have been able to answer your question of, “Is it okay to cry in front of your girlfriend?”

Ultimately, a woman is attracted to a man because of how he makes her feel and the stronger he is (emotionally), the better she will feel around him. When a guy behaves in ways that make her feel feminine, protected and taken care of, she feels attraction.

If on the other hand she feels that she has to carry the slack in the relationship to compensate for her man’s weakness, she will at best, begin to feel like a mother figure or sister to him and at worst, she will begin to lose respect and attraction for him.

Get watery eyed if want to, but make sure you stay in control of your emotions and make sure that you remain being the “man” in your relationship.

My Girlfriend Likes to Party and I Don’t