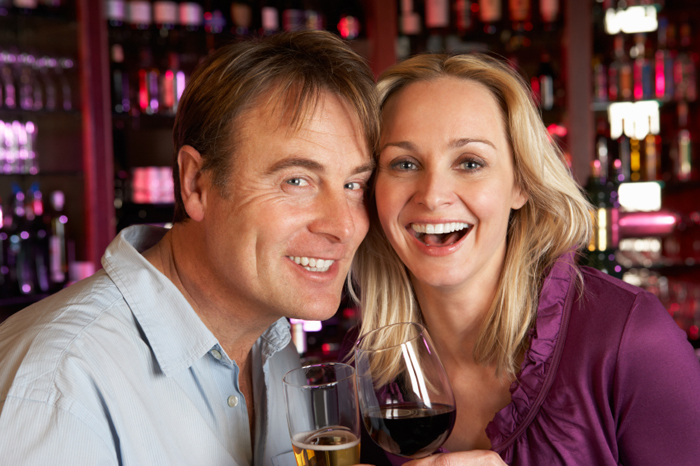 Dating After 40: The Secret to Success

As a man, if you’re looking to experience dating success after the age of 40, then today is the day that you will begin to make it happen.

The secret to success is to understand that women are lot easier to attract and have sex with than most guys realize.

According to a USA study, 55% of couples admitted to having sex on their first date and a European study found that 70% of women have had a one night stand.

In other words, you’re going to get laid. It’s going to happen.

If you want to get some action, you’ve got to first focus on improving your ability to attract women when you interact with them. If you have that skill, attracting and picking up women will be a relatively simple process for you.

As you will discover from the video above, most women place more importance on how a guy’s personality and confidence makes them feel, rather than what he looks like.

Yes, some women are very picky and only want a guy who looks like a male model, has a perfect body and loads of money, but the majority of women are much more flexible about what they find attractive in a guy than most men realize.

If you’ve reached your 40s, you will probably the saying, “Life begins at 40” and “You’re only as old as you feel.”

Yet, if you’ve reached your 40s and are single and looking for love, there can be no denying that being on the “wrong” side of 40 can make you feel old, right?

Dating is usually looked as something that only “young” people do and this belief is often by so many of the online dating sites that are geared towards younger people who just beginning to find their feet in the dating world at large.

So, where does that leave you if you’re looking for advice on dating after 40? It leaves you right here, reading an article from a true dating expert that will help you, irrespective of your age.

Personally speaking, I’m 37 and I recently married my sexy, 22 year old girlfriend. I attracted her with my confidence, charisma and charm and then deepened her feelings of love, respect and attraction for me as the relationship continued.

Despite that she is young, sexy and has a perfect body, I picked her up even though I spend no time in the gym at all. I do a bit of running and bike riding to keep healthy, but I don’t have time to work out in the gym…and I haven’t needed to that to attract women.

Dusting Yourself Off and Getting Back Into the Dating Scene

A lot of the guys who contact me looking for advice on dating after 40, have found themselves single again after 10 or 15 years of marriage, or many years in a long-term relationship.

A man may have been away from the dating scene for practically half of his life and will often terrified or depressed about having to get back out there and find a woman. Often, it simply comes down to the man losing a lot of confidence over the years and not knowing how to get his “mojo” back with the ladies.

Other times, it’s a question of not knowing where to start because the guy met his wife in high school and never really dated any other girls before getting married. In effect, men like this have based a lot of their identity around the long-term relationship and have forgotten who they actually are as an individual.

The good news for you is that, while the world has changed at lightening pace over the last few decades, the qualities that a woman looks for in a man have remained unchanged.

You don’t need to do anything other than improve your attract women to your personality and confidence then simply get back out there to mingle with some beautiful women. Whatever you do, just make sure that you absolutely understand and remember that…

It’s Not All About Looks

It’s no surprise that men in their 40s often get caught up the advertising world “hype” that says a guy has to look a certain way, smell a certain way, wear a certain brand of clothing, and drive a certain car to be attractive to women.

It you look at the “Just For Men” hair dye ads, they will tell you that women HATE any signs of grey hair or ageing on a man, when in fact many women LOVE it.

For most of human history and still to this day, women are instinctively attracted to older men because they usually represent a better chance of survival, prosperity and protection.

However, since most guys are clueless when it comes to women, they are susceptible to getting tricked into thinking that putting a color in their hair or wearing a face cream with get them the girl.

If you want to be successful at dating after 40, you must realize that you already have the best asset of all: You are a man.

If you don’t think that you’re good enough for women, you are probably going through life making up all sorts of excuses as to why you’re not successful with women.

Yet, as you will discover from the video below, there is usually only one, simple reason why men fail with women…

As you will discover from the video above, most guys who fail with women make up all sorts of excuses about why women don’t find them attractive. Yet, a man’s attractiveness to women is mostly based on the personality traits and behaviors that he displays to her during an interaction, rather than on his looks.

Yes, some women only want a young looking guy with muscles, money and a full head of hair, but most women aren’t that shallow and you will realize that if you watch the entire video above.

What Do Women Find Attractive About You?

There are many different personality traits and behaviors that you can display to women to trigger their feelings of attraction for you.

None of the above traits can be achieved with hair dye, special creams or the latest car, but they are qualities that can be developed when you choose to invest in improving yourself as a man.

Most women (not all) are not eternally impressed by guy’s outer appearance or his material possessions. Sure, that might attract some women initially, but most women are more impressed and attracted to who a guy is as a man, which is an attraction principle that holds true whether a guy is in his 20s or 40s.

Don’t Worry About the Baggage That You Are Carrying

I often get contacted by men in their 40s who want to know if they should tell a woman right away about how much “baggage” they are carrying from previous relationships.

Baggage can be anything from on-going divorce proceedings, having children who live with them or commitments related to an ex-wife or family.

Honesty is always the best policy, if not for the fact that when it comes to dating after 40, most women are looking for the real deal. However, a mistake that some men make is “off-loading” their entire life story onto a woman they’re supposed to be getting to know on a date.

A woman who is attracted to you and interested in dating you won’t always see everything that comes with you as being unattractive baggage.

Instead, she will see it as part of who you are and will respect you for it, as long as you come across in a way that shows you are balanced, have everything under control and you’re able to live a fun, interesting lifestyle as a result.

On the other hand, if you talk non-stop about your past and come across in a way that suggests you feel depressed, unattractive or miserable about your other commitments in life, then she is going to feel turned off by your inability to deal with life.

Women feel respect and attraction for men who have their life under control, even if there are many moving parts that he wishes he could cut off or leave behind.

Your past has certainly helped to make you the man you are, but it’s the man that you are when you interact with her and the man that you’re aiming to be tomorrow that makes you attractive to a woman. Don’t make the mistake of dwelling on what has already happened in your life so far; dating after 40 is no different to dating after 20.

While a woman will be interested to find out about your past, it’s what is happening between you and her right now and what may happen in the future that is most interest to her.

What Do You Need to Improve About Yourself to Be Successful With Women?

You can always become an even better version of the great man that you are today, but don’t make the mistake of thinking that you will find the solution in a bottle of hair dye or the latest car.

Do Women Judge Men On Looks?