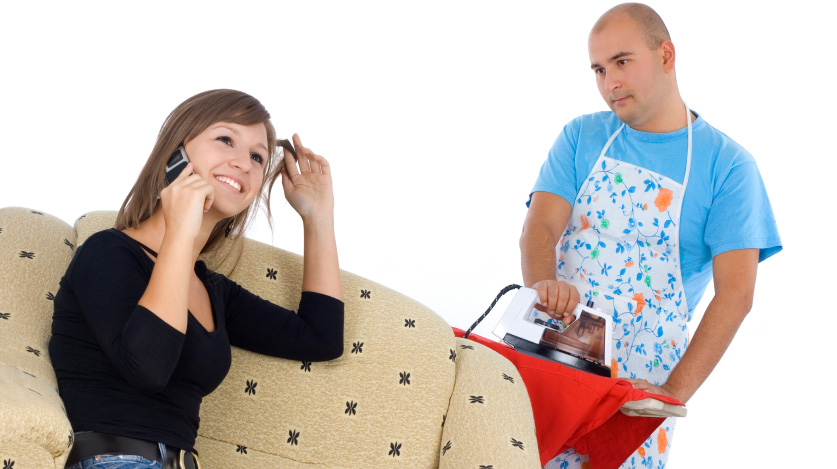 Should Men Do Housework?

There’s nothing wrong with a man helping a woman with the housework at times, but only if it’s absolutely necessary.

According to Norwegian study, divorce rates are 50% higher for couples who share the housework compared to those where the woman takes on most of the responsibility.

If a man essentially gives up his will to achieve big things in life and hides from his true potential by wasting time with housework, his woman will not fully respect him.

Although she may deny that if people ask her (because she’s enjoying the break from her housework), a woman will never, ever respect a housewife husband as much as a man who is rising through the levels of his true potential as a man and going after big and challenging ambitions.

So, does this mean that if a man does housework his relationship is doomed to failure? No, it’s not that simple.

Sometimes, it’s absolutely necessary to help out. For example: She is very busy with work and working overtime, while you work a normal job and have plenty of time at home, but can’t afford to hire a cleaner to help out.

If that’s the case, it is fine. However, if you have just as much free time as she does and do the housework for her because you don’t want her getting angry, then she’s going to lose respect for you as a man. She will let you do the housework, but she won’t look at you in the same way as she would a man who made her feel like she had to do the lion’s share of the housework.

Again, most women won’t admit that outright and there are some women who even say that I am wrong, but statistics and real life examples don’t lie.

Have you ever heard of Kate Thompson? She has been referred to as “Britain’s Worst Wife,” which is a title that she’s proud of.

Kate Thompson’s husband does most of the cooking, cleaning and ironing. He only gets sex on birthdays that end with zero (e.g. 40, 50). A classic example of what happens when a woman wears the pants.

In Kate’s own words:

“My husband is the kindest, most considerate man in the world. During the seven years we’ve been married, Ben has done most of the cooking, cleaning and ironing without ever being asked. And yes, he works full-time.

And if you think I reward his sterling domestic efforts with treats in the bedroom, I’m afraid I fail in that department, too. Intimacy is reserved only for his birthdays – and then just the ones with a zero.

Does that make me a selfish, slovenly, neglectful wife?” Probably – but it also makes me a happier one.” Kate Thompson

This is a classic example of what happens when a man becomes a woman’s little bitch.

He hides from his true potential as a man behind her and the relationship. Instead of following through on his biggest ambitions and most challenging dreams in life (and becoming a bigger and better man throughout life as a result), he does the dishes.

What does he get for it? His wife is in “awe of the way he looks after her.”

Each to their own, I suppose.

The Need That a Woman Has For a Man Has Changed

In the past, a woman had to stay with a man for life, even if she was unhappy because it was shameful to divorce and she usually wouldn’t able to support herself without him. She would stay at home and base her life around being a mother who cooked, cleaned and took care of the children and her husband’s needs.

These days, most women are no longer dependant on a man’s income to support the household, so divorce has become an “easier” option for unhappy women.

If a man wants to keep a relationship with a woman together for life, he has to know how to deepen her love, respect and attraction for him over time. Doing all the housework for her, or sharing it 50/50 will NOT achieve that goal.

Again, there’s nothing wrong with a man helping out, but if you want to maintain a woman’s respect for you, the majority of your free time should be spent on following through on your biggest and most challenging ambitions in life.

When you do that, she feels proud to be your woman. She wants to be with you and she knows that without you in her life, it would be next to impossible to find another man who is courageous as you are about following through on your biggest ambitions in life.

Not only do you love her, respect her and make her feel the sexiest woman on Earth, but you are the man. You are someone that she can look up to and feel proud to be with. When that happens, a woman does not want to leave. She is happy and the relationship feels right.

Sure, there are some women out there who are more like men and want to achieve big things too. Those types of women usually attract feminine types of men who are willing to be a housewife and stand back as she takes on the world. However, their sex life will be basically non-existent and the husband will only be “allowed” to have sex with her when she wants.

After helping 100s of phone coaching clients fix their relationship and marriage problems, I’ve seen it time and time again. When a guy fails to be the man in the relationship and hands over his power to the woman, the sex almost always dries up and only happens on her terms.

You Need to Have Clearly Defined Roles: You are the Man and She is the Woman

Sharing the housework evenly amongst a man and a woman leads to a relationship without clearly defined roles.

You and your girlfriend (fiance or wife) feel more like friends who share a house together than man and wife. That type of dynamic doesn’t create sexual attraction because you are both neither the man or the woman; you’re neutral housemates.

After a while, the spark dies out and the sex dries up. The couple then begins to wonder if they are meant for each other, not even knowing that they are killing the potential for attraction by not having a clear masculine/feminine dynamic in their relationship.

It might seem old fashioned to refer to housework as “women’s work,” but when the relationship dynamic is right, a woman actually wants to be the woman and allow you to have time and space to go after your biggest and most challenging goals and ambitions in life.

She doesn’t want you to waste time dusting around the house, but she does want you to fix the leaky tap in the kitchen if you can. If you can’t, she wants you to help out by arranging for a plumber to come and fix it.

Just because a lot of men have been behaving like housewives lately, it doesn’t mean that it’s the correct way to approach your relationship. All you need to do is look at the divorce rates, especially with regards to the Norwegian study, to see that you need to be the man and allow your woman to be the woman.

Times When I Do Housework

Recently, it was my wife’s birthday and we had a bit of a party at home with some friends on the night before her actual birthday.

After a big night of drinking, laughing and partying together, everyone headed home and my wife and I went to bed.

I wouldn’t normally include this because it might sound like I am boasting, but since I’ve been talking about sex in relationships during this article, I will say for the record that we had some pretty awesome sex that night.

Anyway, in the morning, I woke up before her and headed downstairs. The place was a mess.

I was hungover, but after having a coffee and a quick breakfast, I quickly got to work on cleaning up the downstairs part of the house where all the party action was. It took me two hours of non-stop work to get it all cleaned up, but it was worth it. When my wife came downstairs, she was amazed, happy and shocked at the same time.

I don’t normally have the time to be doing housework because I work so damn hard on The Modern Man (seriously – I put in 50-60 hours per week), but this was the morning of her birthday and I did it as a nice surprise for her.

For the record: I didn’t buy her a birthday present. I have the type of relationship with her that doesn’t require presents on every special occasion. Being truly in love with each other and doing nice things for each other is more than enough.

Regarding housework, my wife actually doesn’t want me to waste time doing it because she knows that I could work endlessly on writing new articles for The Modern Man and never be finished. Helping guys to be more successful with women is my passion, not dishes or dusting.

Will My Relationship Last?