How to Be the Life of the Party …and Get the Girl!

A big part of being the life of the party is trusting in yourself to go with the flow and be your real self.

When you can do that, people naturally gravitate towards you because you are seen as the cool guy who is being authentic and having a great time. When women see that others like you, they like you even more and picking them up becomes twice as easy.

Being the Guy Who is Attractive to Women

Have you ever been to a party and noticed that some guys (even though they aren’t good looking, tall or rich) are liked by almost all of the women there?

Have you also noticed that some guys (even though they are good looking, tall or have a great job) are overlooked by almost all of the women there?

What is going when that happens? Why do some guys get more attention from women than others? 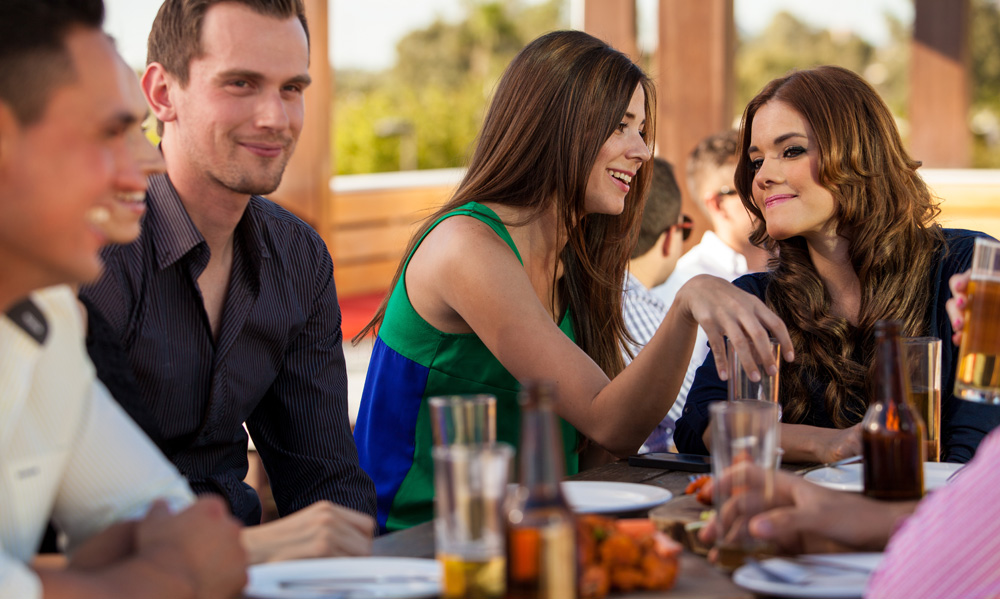 Have you ever gone to a house party or social function and found yourself sinking into the background, wondering how you can join in with the “popular people”?

As you feel left out and worry that you’re not making a good impression, you notice another guy who is effortlessly holding everyone’s attention, having great conversations with lots of laughter and having women fall all over him.

What does he have that you don’t? What makes him such a “people magnet”? How is he able to be so comfortable around all the girls and be so calm, confident and cool when talking to the other alpha males?

A big part of the other guy’s secret is that he knows how to make women feel attracted to him. When he interacts with women, they laugh, smile and feel excited because he knows how to trigger their feelings of attraction.

Even if he is just being friendly to most of the women, they still feel good when talking to him because he is actively saying and doing the sorts of things that make them feel attracted.

Another secret of the guy who is popular at parties is that he also gets involved in the party. He trusts that he can handle himself and just goes with the flow. However, as for you, the more time you spend hiding away from the action and wondering what his “secret” is, the more you begin to fade into the fixtures and fittings of the house, bar or venue of the party.

Instead of trusting yourself to go with the flow and have a great time, you begin to go into your head, constantly worrying what people are thinking, assessing your “coolness” in comparison to others and trying to fit in.

What you need to realize is that people go to parties to be sociable and to have fun. They go with the expectation of mingling and meeting new people and they also go with every intention of taking part in some social flirting and funny banter that goes on.

So, if you’re the guy who hides away in a quiet corner observing what everyone else in the room is doing, you’re missing out on building new friendships and finding yourself a girlfriend, or at least a woman to have sex with for the night. You’ve got to learn to trust yourself. Trust that you can hold your own in a conversation and be confident when the attention is on you.

How to Be the Life of the Party: Go With Your Gut Instinct

The people who appear to be the most charming and interesting at a party are usually those who trust their gut instinct and be themselves. Think about the times in life when you are the most comfortable being yourself. Maybe it’s when you’re chatting with a close friend or discussing business with your co-workers.

Whatever the case, in those moments, you are going with the flow and trusting that you can handle yourself in the moment. You’re not sitting there worrying about making a mistake or looking stupid.

How to Be the Life of the Party: Flirt with the Women

Flirting is the way that a man and a woman communicate their sexual interest in each other, without actually saying the words, “I like you and want to have sex with you.” It’s a discreet form of communication that takes place during a conversation or interaction between a man and a woman.

According to the Social Issues Research Centre (SIRC) in the UK, flirting is a fundamental part of human nature: “Flirting is much more than just a bit of fun: it is a universal and essential aspect of human interaction. Anthropological research shows that flirting is found, in some form, in all cultures and societies around the world.”

They also go on to say that without our instinctive ability to flirt, the ability to initiate contact and express interest in members of the opposite sex would also be lost, meaning we’d become incapable of progressing to reproduction and the human race would become extinct as a result! No pressure to get your back off the wall and start mingling in!

How to Be the Life of the Party: Joke with the Men

A big part of being the life of the party is being able talk and joke around with the alpha males in the room. If women see that you are intimidated by the alpha males, they will naturally lose their feelings of attraction for you.

If other guys see that you are intimidated by the alpha males, they will sometimes begin to treat you disrespectfully by making you the butt of jokes or excluding you from conversations.

How to Be the Life of the Party: Help People Feel Good About Themselves

If you want people to show interest in you at a party, you often need to make them feel good about themselves first. Since most people are insecure and lack confidence in themselves, they respond very positively to those who make them feel good about themselves. So, avoid being the guy who talks about himself the whole time, focuses on negative conversation topics or points out mistakes a person is making in life, in the conversation, etc.

When you say something that makes someone else feel good about themselves, you make yourself a more attractive person to be around and you instantly come across as a more “likeable” guy.

Warning: I am not saying that you should be handing out insincere compliments or loads of compliments. It needs to be sincere and it needs to be a minor part of the conversation you have with the person.

Focussing too much on saying nice things will make you come across as insincere or as an a** kisser. Neither is good at a party or in life for that matter!

How to Be the Life of the Party: Talk to as Many People as Possible

The more people you talk to, the more popular you will become at the party. After speaking to people in five separate groups, don’t be surprised if, on your way to the toilet/bathroom, you are stopped once or twice by people who want to talk to you again.

This is much better than feeling like an outsider and going to the toilet/bathroom to merely “hide” for a while until you recover from the anxiety you’re feeling.

So, talk to everyone. Talk to the cool people, the “uncool” people, the grannies, the young people, the staff (if there is any), the host of the party and anyone else who happens to be around. Soon enough, you’ll have people walking past and tapping you on the shoulder to chat to you again or calling you over to rejoin their group.

How to Be the Life of the Party: Be the Guy You Imagine Yourself Being in Your Daydreams

Every guy who wants to become more attractive to women, more skilled socially and an all-round confident guy, will spend many hours a week daydreaming about how things “could be.” Don’t worry about how things could be. Make it happen in reality by DOING IT.

The guys you see at parties who seem to be effortlessly holding everyone’s attention, they’re just mingling. They’re putting themselves in a position to meet the maximum number of people and, crucially, they are trusting their gut instinct and going with the flow.

You need to learn to trust yourself and be the guy who imagine yourself being in your daydreams. People are rarely going to come looking for you if you’re hiding out somewhere in a quiet area of the party, and no one is going to hang around for very long if you’re not fun to be around when they do find you.

To be the life of the party, you have to trust your gut instinct and allow the real, confident and charismatic version of yourself to come to the surface.

Rejection Isn’t What Most Guys Think it is…

5 Sex Myths That Make Men Feel Bad About Themselves