How to Talk to a Woman in an Elevator

If you want to talk to a woman in an elevator, the main thing that you need to do is make her feel relaxed and comfortable in your presence.

That Hot Girl in Your Apartment Building 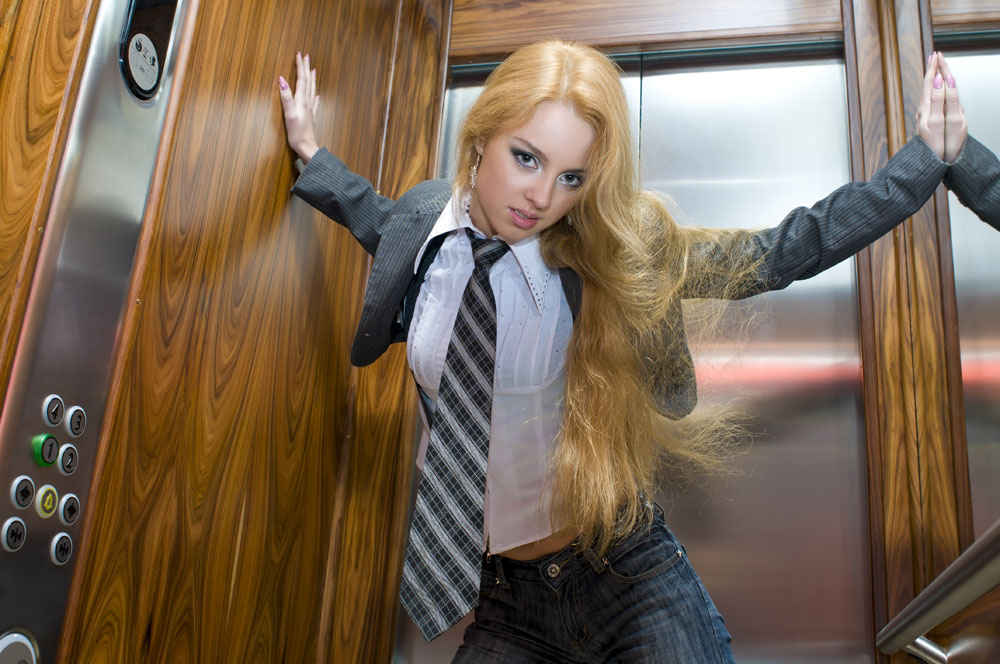 A classic movie scenario is the guy who lives in the same apartment building as a really beautiful woman.

Every day on his way to and from work he bumps into her in the elevator. However, he never plucks up the courage to talk to her because he doesn’t know how to talk to a woman in an elevator. Although this is something that can be seen in a movie, it is also often the case in real life.

There are many guys who waste a perfect opportunity of talking to a woman in an elevator because they simply don’t know how.

Elevators are the ideal environment to talk to and approach women; they are closed and intimate and you have the woman’s rapt attention until one of you reaches your destination. But, although elevators are a great place to talk to a woman, it is also easy to come across as being really creepy and make her want to run for her life.

Another thing to consider when you talk to a woman in an elevator, is that the two of you are seldom alone, so you will have to be at ease approaching her in front of others. This closed environment, although great if only the two of you are in the elevator, when there are others present, can get her to be shy and unresponsive.

This is why your approach should be completely different to the way that you would approach her if she was in a bar or nightclub. If you use a “bar” approach on her in front of others in the elevator, it will cause her to become uncomfortable and react in a negative way.

Elevators are small and time is limited. Guys often forget this and behave in ways that cause the woman to feel anxious or threatened.

1. They behave in a nervous and anxious manner.

Women are seduced by, and attracted to, confident men, so when a guy is nervous and tense in his approach to a woman in an elevator instead of being relaxed and easy-going, it will only serve to put her on edge and make her want to get out of the elevator fast.

When he is easy going and relaxed, she will enjoy the interaction and will be comfortable enough to open up to him. Women are attracted to confident men with high self esteem and nervous or anxious behavior does not engender confidence.

When a guy is stuttering and stammering in front of the people she sees regularly, including neighbors or work colleagues, this approach will make her uncomfortable and she will rebuff him.

2. They misinterpret her response.

When a woman is approached in an elevator, which normally has other people in it, she will usually give the minimal response. This can cause the guy to think that her lack of conversation contribution is that she doesn’t like him; but it’s usually because she’s feeling nervous.

There is a well known and unspoken rule that when people are in an elevator together they should not speak, but if they have to then they should speak in very hushed tones. Taking this into consideration a guy should not assume that her reserved response to him is because she’s not interested.

Misinterpreting her response can prove to be the difference between getting her to agree to have coffee with him and blowing his opportunity.

If he, for example, asks her too many questions about herself without revealing much about himself he can come across as being a stalker. This will make her fell tense and even a little threatened.

The elevator is not the ideal place for twenty questions and a guy’s main goal is to get her to relax and open up to him as quickly as possible without making her feel uncomfortable.

4. They make her feel embarrassed in front of others.

Being picked up in front of other people is not an ideal situation for any woman. If a guy comes on too strong and behaves like his only aim is to “pick her up”, he will make her feel embarrassed and want to get out of the elevator as fast as possible.

Not only is she in public and in close proximity to others, but they are usually also her neighbors or work colleagues and she will be reluctant to be in a situation that makes her feel uncomfortable in front of them. Putting her on the spot in front of other is definitely not how to talk to a woman in an elevator.

5. They fail to create any feelings of attraction.

Although the guy should do his best not to embarrass her, he does, at the same time, have to create attraction between them. If he doesn’t use flirtation and seductive body language, however subtle, she will assume that he is just another overly friendly guy and she will either ignore him or assume that he wants to be her friend.

Using friendship as a way to get her to open up to him is not a good idea because it will backfire when he wants to take their relationship from “friendship” to sex. This is why creating attraction between them is the most important part of his approach and he should strive to create attraction between them from the first minute that they interact.

What Attracts Women to Men?