Hey – Don’t feel down on yourself for not understanding women.

Women don’t understand everything about men either.

Both genders are confused about each other; so don’t put all the blame on yourself.

If you want to understand what women really want from men and why they think and behave in the ways they do, watch this video…

As you will discover from the video above, many other intelligent, successful men don’t understand women as well.

It’s not just you.

In fact, if you watch the entire video above, you will know more about women than most guys will figure out before they reach 50 or 60 years old.

One of the strangest things that guys struggle to understand is why women claim to want a nice guy, but they then reject guys who are very nice to them.

I mean, if she wants a nice guy, then she will be happy if a guy is really nice to her, right?

As you will discover from the video above, women don’t reject guys for being nice; they reject guys who don’t make them feel much or any attraction.

A typical nice guy who has no idea how to make a woman feel attracted and turned on, will be really nice to a woman and expect that it will be enough for her to “give him a chance.”

Pretty much any guy can put on an act of being nice, but that doesn’t mean he will nice to her later on in a relationship. It also doesn’t mean that he is going to be able to survive, thrive and prosper in this world.

It just means that he’s nice.

…and anyone can be nice for a while if they want something.

Women know that most guys are willing to put on an act of being nicer and more generous than they actually are, in the hope of getting some action.

Yet, women see right through and reject them because the nice guy won’t be doing anything to make her feel attracted and turned on sexually. He will just be nice, polite, respectful and friendly towards her.

He will then be shocked when he sees her hook up with a guy who doesn’t waste any time putting on a nice guy act and simply makes her feel attracted, kisses her and then hooks up with her.
Do you know how to make a woman feel attracted to you?

Watch this video to find out…

As you will discover from the video above, you have a lot of direct control and influence over how much attraction a woman feels for you.

For example: If a guy interacts with a woman and displays signs of nervousness, low self-esteem and also puts on a nice guy act, she will feel turned off by him.

If she also notices that he is putting on an act of being nicer than he actually is, she will put her guard up and won’t be able to relax around him because she doesn’t fully trust him.

The Guy With a Lot of Female Friends, But No Girlfriend 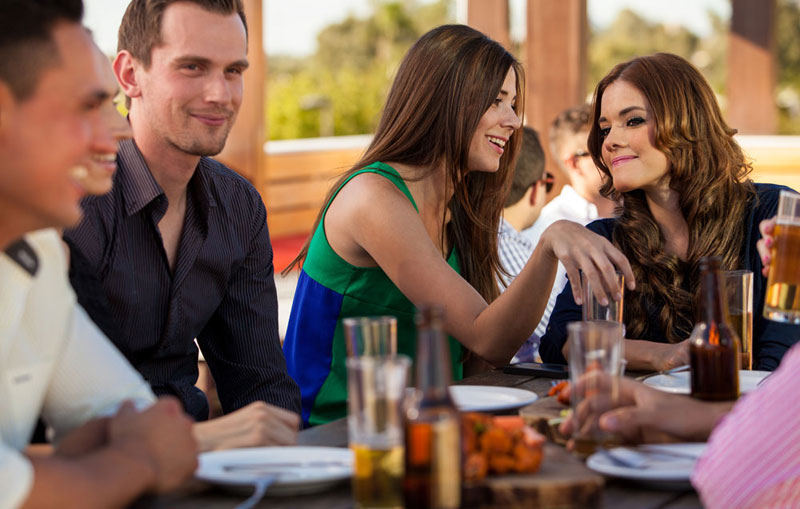 I’ve been helping guys to become more successful with women for more than 10 years now.

Over the years, I’ve found that approximately 30% of guys have a lot of female friends, but still can’t manage to get laid or get a girlfriend.

Here’s an example (the name and some details have been changed for privacy):

Tom had plenty of close female friends that he’d known for several years, but he struggled to get himself a girlfriend.

His female friends always said things like, “You’re such a nice guy Tom…any girl would be lucky to have you as their boyfriend,” but none of them showed any sexual interest in him at all.

When he tried to ask one of them out on a date, he would get excuses like:

Despite the rejections from women that he was close with, Tom decided that he would continue being the “good friend” that he’d always been because he felt being friends with a girl he really liked was better than not having her in his life at all.

Secretly, he was hoping that one day, one of these women would eventually come to realize that he was the guy she’d been looking for all along and fall madly in love with him.

Sure, it works like that in the movies and with unattractive women or with women who are old and no longer wanted by other guys, but all other types of women simply hook up with a guy who is able to make them feel attracted, rather than just be a friend.

So, what was Tom’s mistake?

He was essentially being too nice.

When listening to his female friends, he kept hearing them talk about wanting to meet a “nice guy,” so he fell into the trap of believing that continuing to be really nice would eventually cause his female friend to realize that he was “the one” for her.

Tom didn’t realize that attracting and hooking up with a woman is something that can happen immediately.

He assumed that he needed to get to know her for a while and build up her interest in him as a friend, before she would be interested in anything romantic or sexual.

He completely overlooked the fact that other guys simply approach and talk to women, make them feel attracted, hook up with them sexually on the first night or first date and then start a relationship.

Without being aware of that, Tom thought that he had to show her how much of a good friend he was, how much he respected her and how nice he could be to her.

From Tom’s perspective, he felt as though he was:

Yet, he just kept getting reject and thought, “Do I need to be even nicer? How else can I prove to her that I am a nice guy?”

So, when Tom said to me, “I don’t understand women,” he had every reason to feel confused. The women he knew were all saying that they wanted a nice guy, but they continued to date guys who weren’t even 10% as nice as he was.

I explained to Tom that there’s nothing wrong with being nice to a woman, but it’s not the thing that makes her want to begin a sexual relationship with you.

You have to start by making a woman feel sexually attracted and turned on by you and then anything nice that you do for her will be seen as sweet and charming.

She will feel lucky to have found a guy who not only turns her on, but is a good guy with good intentions. That is what women are looking for.

When a woman says that she wants a nice guy, she means, “I want the guy that I’m attracted to and turned on by to also be a nice guy.” She’s not saying, “I don’t care about feeling sexually attracted and turned on and just want a guy to be nice to me.”

You may have started out today thinking, “I don’t understand women,” but hopefully you now understand a little more about the female version of the human species.

As a man, you need to learn this stuff on your own. Don’t expect women to teach you how to be the type of confident, emotionally attractive man that they want.

If a guy doesn’t understand how to attract women and turn them on, they just reject him or keep him around as a friend. Women don’t want to take on the role as your teacher on how to be an attractive man.

They want you to work that out yourself, so you are a ready made man, rather than a guy that they have to teach and guide throughout life.

A woman wants to be able to look up at you and respect you as her man, rather than feeling as though she needs to take care of you and teach you how the world works.

So, if you are serious about wanting to understand women, I recommend that you watch this video…

As you will discover from the video above, most guys that a woman meets have no idea how to make her feel attracted.

It’s easy for women to make us feel attracted because we feel instantly attracted to a woman’s looks.

Most guys are willing to have sex with a woman and even begin a relationship with her just because she looks attractive.

Yet, the same rule doesn’t apply for women.

The majority of women select a guy based on how much attraction his personality and inner qualities make her feel.

Sure, some women only want a good looking, rich man with muscles and a lot of status in society.

Yet, the majority of women are much more flexible about what they find attractive in a guy and do not base it purely on his looks.

How to Get an Ex Back: 6 Things You Should Know

My Wife Wants to Leave Me