How to Get a Girl’s Number in a Bar

Getting a girl’s number from a bar is easy, as long as you have made her feel attracted to you first.

If a woman is attracted to you, she will be happy to give you her phone number so she can have a chance to talk to you again, meet up with you and either have sex or begin a relationship.

With some women, you will also need to develop a connection by talking, hanging out and getting to know her (anywhere from 10 minutes to 2 hours) before getting her number. However, you will usually be able get a phone number purely on attraction alone. 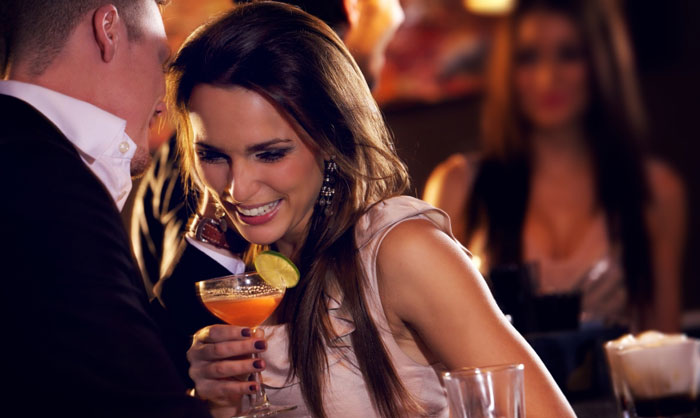 So, what should you say to ask a girl for her number in a bar?

After making her feel attracted to you and developing a connection with her (if necessary), simply say:

You: Hey, it’s been cool talking to you. Do you want to talk again sometime?

Her: Sure, that would be cool.

You: Okay, sounds good. [Hand her your phone and open it to the part where she can input her name and number] Put your number in here.

Her: [Puts in her number]

You: Okay cool…I’ll give you a call sometime. Maybe you can take me out on an expensive dinner.

You: Okay, if you insist….but, my idea of an expensive dinner is McDonalds or eating at the food court in a shopping mall.

In the example above, I am playfully suggesting that the woman will need to take me out to an expensive dinner. This is an example of being what women refer to as a “challenge,” where you take on the role of the one who is more valuable.

Note that I am also including some light, self-depreciating humor (“my idea of an expensive dinner is McDonalds or eating at the food court in a shopping mall…”) to not come across as being arrogant. The key is to be playful with the idea of being a challenge, rather than being overly-serious about it.

Many guys are afraid to be a challenge or use any risky humor because they don’t want mess up their opportunity with the woman. Ironically, by joking around and being a bit of a challenge, it is way more impressive and attractive to a woman because she can see that you’re not putting on an act of being a super nice guy in the hope that you will get lucky.

Instead, you are a confident guy who believes in himself and his value to women, which is enough to make most women want to be with you.

If she is single, a woman will almost always happily give her phone number to a confident guy who is making her feel attracted. She has no reason not to.

However, if you make one of the following mistakes, she may reject your request and give you a classic line like, “I don’t give out my number to guys that I meet in bars” or ask you, “Why do you want my number?” to put you on the spot and see how you react.

1. Being too serious about getting the number.

Some guys make the mistake of behaving in an overly-formal manner asking if it is “okay” to get the woman’s phone number, or whether she wants to see him again. Both of those approaches usually get rejected because a woman doesn’t want to feel like she is doing him a favor or is already in charge of leading the relationship.

To avoid being rejected, simple determine whether or not she wants to speak to you again and then tell her to put her number in. Ask her, “Hey, it’s been good talking to you. Would you like to chat again sometime?”

Don’t ask her it it’s okay to get her number. Just tell her to give it to you (e.g. “Okay cool, put your number in here.”)

Getting a girl’s number isn’t a big deal or something that you should be afraid of doing. A phone number exchange is a very normal and expected outcome of having an interaction and feeling attraction for someone. So, don’t think that you’re doing a bad thing or being “too forward” by getting her number so soon.

If she is feeling attracted to you, then she is going to be happy that you’ve asked for her number.

2. Waiting for extremely obvious signals of interest before asking for the number

All women show their interest in guys in a slightly different way.

For example: Sometimes, you will talk to a girl and she will make it completely obvious that she likes you. She will touch you, giggle at almost everything you say, look at you with loving eyes and give you a lot of compliments.

Other times, you will talk to a girl and she will play hard to get to test your confidence. She will be looking for a guy who doesn’t need a woman to show lots of interest to believe in his attractiveness to her.

There are many different types of women and they all show their interest in slightly different ways, so don’t make the mistake of thinking that every girl will make it completely obvious that she wants you to ask for her phone number.

You have to have the confidence to take a risk and ask for the phone number. As long as she is feeling attracted to you, a woman will almost never reject you.

3. Asking for a number without first making her feel attracted

Most guys never get taught how to attract women, so their main strategy for success is to ask out as many women as they can. It seems like a good plan to approach and talk to 100 women and hopefully one of them says “Yes,” but it’s a horrible plan.

When you know how to properly attract women, you only need to speak to one or two women and you’ll get a phone number, get laid or get a girlfriend. It’s a lot easier than most guys think.

How about you? Do you know how to attract women? Do you have the skill of being able to trigger feelings of sexual attraction inside of a woman? Watch this video to find out…

There’s nothing wrong with being nice to a woman, but niceness isn’t something that will mark you out as being special.

If a woman is attractive, most of the guys that she meets are going to be nice to her in the hope that she “likes” him enough to “give him a chance.” She’s not looking for another nice guy who will treat her like a princess, but not make her feel any sexual attraction. If she is like most women, she is looking for a good guy who ALSO turns her on.

So, if you’re talking to a girl in a bar and you want to get her phone number, make sure that you’re not acting like a super nice guy in the hope that it will get her to like you. You have to focus on making her feel attracted to you and then, the fact that you’re also a good guy will be another thing that she finds appealing about you.

5. Waiting too long to ask for the number

If a woman is interested, she will usually give a guy a “window of opportunity” to make a move and either get her number, kiss her, get her alone to talk one on one, or take her home for sex.

These days, most women have either experienced a one night stand or are open to having one, so if you’re talking to a woman who is interested in you and you don’t even have the confidence to get her number, she may assume that you don’t understand how the modern dating scene works and she will begin to lose interest.

As long as you have made her feel attracted to you, there is no need to worry about being rejected. If she is attracted, a woman will rarely, if ever, reject a guy who takes things to the next level…

Why Are Beautiful Women So Mean?

How to Get a One Night Stand