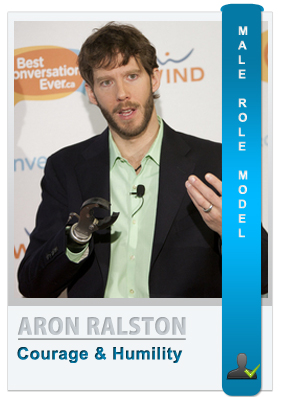 Aron Ralston, the man that the Hollywood movie “127 hours” is based on, rose up to become a role model for modern men after his harrowing ordeal of being left for dead in a rock crevice in the middle of nowhere. His strength after his nightmare experience in the desert has shown what kind of man he really is.

Brave beyond measure – When his arm was pinned down by a fallen boulder in a rock crevice in the middle of nowhere, Aron eventually decided to cut off his arm and get to safety before he died.

How many of us men would have the bravery exhibited by Aron Ralston during his ordeal to survive at all costs? Most men would have just given up and reluctantly died rather than be willing to do something as horrific as breaking their own bones and using a crude instrument to painfully amputate their own arm.

Aron not only did that, but he then had the courage to climb out of the almost impassable canyons and rock walls, using only one of his arms, in an attempt to travel the several miles to his car and then get to a hospital.

Traits such as bravery, masculinity, confidence and emotional strength are things that women find very attractive in men. Unlike us men who select women purely based on looks, most women select men based on certain personality traits and behaviors that have nothing to do with a guy’s looks.

Masculinity – While many men would have developed a “pity me” attitude after such a horrific experience, Aron never lets his physical limitations stop him from doing what he loves – exploring the great outdoors.

He also didn’t let the fact that he was disfigured by his accident to stop him from pursuing, falling in love and marrying a woman he met years after his accident and eventually becoming a father to a son. This is key trait of an effective alpha male.

Adventurous – Aron has spent much of his life exploring the great wildernesses of the world while rock climbing, skiing, and hiking and often going solo on his journeys despite his new handicap. Although he is naturally shy, he also now travels the world as a motivational speaker.

Determined – Instead of allowing his understandable panic to paralyze him when he was trapped, Aron fought through his fears and did what was necessary to save his life. While most men won’t ever find themselves in a situation as life-threatening as Aron did on that fateful day, we can all learn from this excellent male role model.

When we are faced with a difficult situation, the only thing that matters is getting the result we need to succeed. Everything else is just “details” while you are getting there. Focus on the end result and go after what you want.

Humble – While recovering in the Intensive Care Unit of the hospital, Aron was watching CNN and saw that they were reporting on the remarkable ordeal of a rock climber who cut off his arm to save himself.

He didn’t immediately associate the story with himself and when he realized that there was national and international coverage of his own story, he couldn’t understand why it was newsworthy.

Aron Ralston is a seemingly ordinary man with an extraordinary spirit whose love of the outdoors and rock climbing led him to face one of the most harrowing and death-defying experiences any man could ever experience.

His story became the basis of his book “Between a Rock and a Hard Place”, which was so compelling that it was eventually turned into the award-winning movie “127 Hours” starring James Franco.

Growing up in Colorado, Aron Ralston always had a love of adventure. Although he was an honor student at a prestigious university and studied to be a mechanical engineer, he gave up that career path and chose to make it his mission to climb and explore mountains.

On a fateful day in April, 2003, he decided to investigate the Blue John Canyon in eastern Utah.

When he initially set off on his afternoon hike, he brought along only some bare essentials – a few bottles of water, some energy bars, rope, a small video camera and an inexpensive pocket multi-purpose pocket tool (the type of tool that looks like an elaborate pocket knife with a screw driver, small knife, pliers and similar attachments).

Miles away from his car and the cell phone he left there, he decided to explore a crevice he’d read about in a guide book. Unfortunately the experienced climber slipped and during his fall, he dislodged a giant boulder that subsequently pinned his right arm down and pressed his body against the narrow canyon wall.

Unable to dislodge his arm no matter how much he struggled and yanked at it, he suddenly remembered his fateful mistake of not informing anyone of his hiking plans. He wasn’t expected to be back at work for several days, so no one would realize he was missing. He had to work out how to rescue himself.

Despite his repeated efforts over a couple of days, he could not move the enormous boulder. Throughout scorching days and freezing nights he used his pocket tool to try and chip away at the rock to free himself, but his efforts were futile and hardly had any effect on the boulder.

His supplies were also rapidly running out. Feeling a little desperate and almost conceding that he may in fact die, he used his video recorder to document his plight and to supply his family’s contact information in the hopes that if his efforts to free himself were unsuccessful and if his lifeless body was ever found, his family would learn of his fate.

On the fifth day of his captivity, dehydrated and delirious, he continued to chip away at the rock with his now dull and bent knife. During the process, his knife slipped and painlessly sliced into his thumb. He realized that his arm was rapidly decomposing and that his only hope to free himself and survive was to amputate his arm just below his elbow.

Again, using his pocket tool and through the searing pain he attempted to cut off his arm. Recognizing that he wouldn’t be able to cut through his bones, he made the agonizing decision to break the bones of his pinned arm and then cut through the skin.

He painfully and repeatedly broke multiple bones and continued through the excruciating process of cutting and freeing himself until he was no longer pinned by the rock.

He then painfully worked his way back up through the crevice with one arm cut off and bleeding and was eventually able to climb out of the canyon.

Six hours after he amputated his arm, still weak and in tremendous pain, he happened upon a tourist family from the Netherlands on the way to his car. They applied minimal first aid and found help to have him airlifted to a hospital where he spent months recovering and was ultimately fitted for a prosthetic arm.