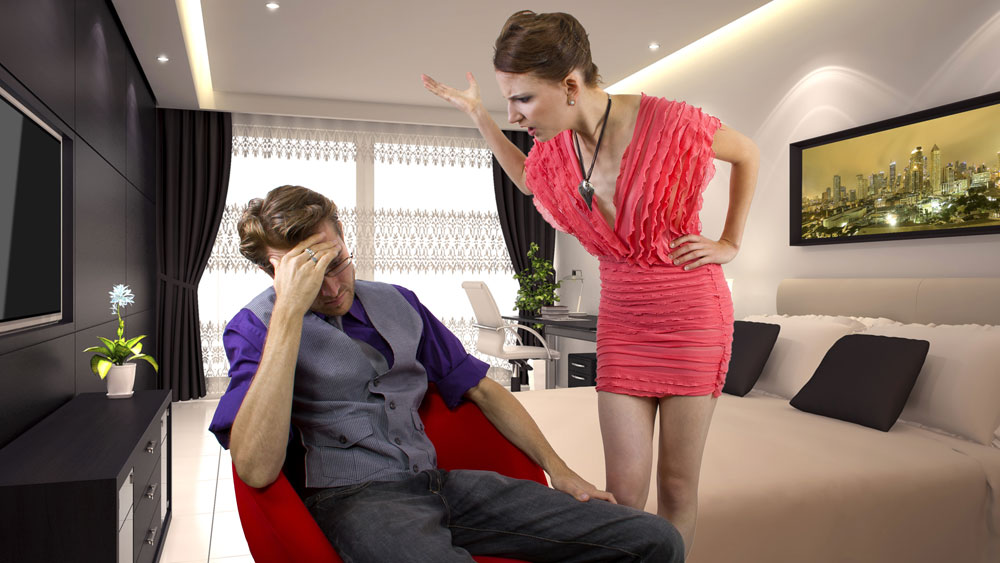 Why Do Women Nag? – Stuff Guys Should Know

If a guy asks me, “Why do women nag?” it’s a safe bet that he’s a guy who regularly gets nagged by his woman! He’s also probably reached a point where he is feeling angry at her and getting into heated arguments with her that he’d rather avoid.

It’s fair to say that most guys think that their woman nags them, but is it also fair to say that all women nag? Well, according to psychological research, it is fair, but there’s more to a woman’s nagging than just getting on a guy’s nerves.

It’s true that women are much more likely to nag than men, but it’s also true that the majority of nagged men choose to get out of a nagging woman’s way rather than try to figure out why it’s happening, right?

All it takes is a little more understanding and a guy can actually make his relationship a nag-free zone … doesn’t that sound better than having to listen to her going on and on and on?

The Truth About Why Women Nag

If you’re asking, “Why do women nag?” because you’re a nagged man, you might be surprised to know that a nagging woman very often doesn’t realise she’s doing it. It might seem like it’s her favourite pastime but look at it this way; have you ever asked her to stop nagging only to have her look offended and hurt by the fact that you think she’s nagging?

I expect you have, and the reason for that is that she doesn’t want to be a nag, and she’s not enjoying being a nag, she’s simply trying to communicate a message to you that you don’t seem to be getting!

In a nutshell, women nag in an effort to express their needs in a relationship. Unlike men, women don’t come straight out with what it is they want, they want the man they’re in a relationship with to know what they want without them having to spell it out.

This, of course, sounds completely illogical to most guys but it’s simply the way it is for most women. Women are genetically programed to care for other people and to put the needs of others before their own. This means when they’re in a relationship, they instinctively want to look after their man, but they also want their man to know how to look after them in return.

Now, if you go by the stereotypical “nagging wife and henpecked husband” roles that TV sitcoms invariably portray, you could easily be led into believing that women nag because they want their “lazy-good-for-nothing-husband” to get off his butt and help with the household chores, right?

In real life, this is not what a woman wants. Real women want to feel like women in a relationship and they nag when something they need to make them feel that way is missing. They don’t want to have to spell it out, so they nag about what they’re not getting rather than coming right out with what it is they need.

So, with the above in mind, a nagging woman wants her man to know what she wants and to provide it for her so that she can feel the way she wants to feel in the relationship.

If you’re a guy who thinks his woman nags because she wants him to help with the dishes or do his share of the cooking or any other form of domestic duty, or that she nags because she likes to be “in charge,” there’s a real danger that your response to her nagging will only make things worse.

For example: To feel like a woman, the relationship needs to have the right sexual dynamic.

This can only exist when there are distinct male and female roles in place (i.e. she is the more feminine one and you are the masculine one), so if a man tries to stop the nagging (and keep the peace) by doing more around the house and taking on more traditionally female roles, he actually upsets the all-important sexual balance even more.

The end result is that her less “manly” man makes her feel less feminine and she feels less sexually attracted to him … and the irony is she’s going to nag more because the something she needs is still missing!

The same can be applied to slipping into the background and putting her in a position of “taking charge.” A classic example of this would be the typical TV henpecked husband response of, “Yes dear, whatever you think dear, I’m sure you know best dear,” to his wife’s incessant nagging! The mistake here is thinking that he’s giving her what she wants.

Remember, in the real world, a woman wants to feel like a woman in her relationship and when she nags, it’s her way of trying to let her man know that something is missing and she’s not feeling the way she wants to.

The more she feels she’s “wearing the trousers,” the less feminine she feels, and the less sexual attraction she feels towards her man … and, you’ve guessed it, she’s going to nag more because the something she needs is still missing!

How to Stop the Nagging

Instead of asking, “Why do women nag?” you need to ask yourself, “What’s missing in the relationship that is making her nag?” and, “What can I do to fill that gap and stop her from nagging?”

She also wants to feel that the man she’s with is mentally and emotionally strong enough to be her protector so that she can relax into caring for him in return.

When you are that man, you have what it takes to create the ideal relationship dynamic, and when you have that, you have a woman who feels exactly the way she wants to in her relationship … and there’s absolutely nothing to nag about!