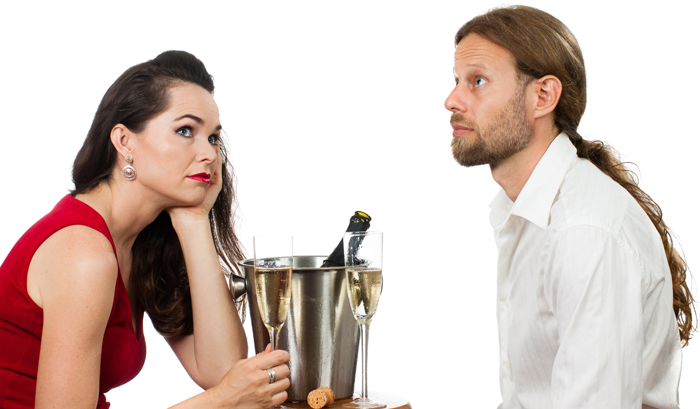 If you’re out there trying to find yourself a girlfriend, you will feel attracted to many different types of women that you meet, but not every conversation will lead to sex, dating and a relationship. Why? No man is compatible with every woman he meets and no woman is perfect for every guy she meets either.

So, how do you know whether or not you and a woman are compatible with each other? How do you know if getting her number is going to lead to a sex and a relationship that works? To answer that, we first have to get clear on the differences between attraction, compatibility and incompatibility.

The Difference Between Attraction and Compatibility

As you can see from the dictionary definitions, when you and a woman feel attracted to each other doesn’t mean that you will also be compatible and be able to have a great relationship that lasts a lifetime. You might be able to arouse the attraction, interest and desire of a woman, but unless she feels compatible with you, it usually won’t go any further than a conversation. Some women will have sex and begin a relationship with a guy purely based on attraction and will later end the relationship when they realize that it isn’t working, but for a relationship to work and last the test of time, you need to be attracted to each other and compatible.

When you’re out there meeting women, you might talk to a woman, find her physically attractive and be open to having sex with her or having her as a lover for a while, but that doesn’t mean that you are 100% compatible and should try to lock in a lifetime relationship. If you want to find a woman to marry or settle down with for life, you have to look for more in a woman than just a feeling of attraction for her.

When it comes to success with women, the most important categories of compatibility that you need to provide her with are emotional, social and mental. Many women are happy to forget about a guy’s lack of good looks and love him for who he is as a man, as long as he is compatible in those other important ways. Additionally, these days, most people aren’t too concerned about spiritual compatibility, but that differs from person to person. For the record, my girlfriend and I share the same open, philosophical beliefs about life and respect the beliefs of all people.

When you’re talking to a woman and there is a strong, mutual feeling of attraction between you, as well as a strong connection in many of the categories of compatibility, that’s when you know you are a good match. Ideally, you want to choose a woman who is perfect for you in every way, because these days, relationships don’t last a lifetime if they aren’t meant to be or if they are only based on a 1-2 categories of compatibility.

When I chose my girlfriend, I had been rejecting women for years before I met her. I had plenty of beautiful girlfriends who were good women, but who usually lacked in some areas of compatibility. For example: Mental and emotional compatibility, where the woman didn’t have a truly loyal character, didn’t have good family values, etc. The other times when I rejected offers to settle down with women was when I just wasn’t ready for it, so in that case, we weren’t mentally, emotionally and socially compatible anymore.

If you’re talking a woman and it feels tense and awkward, does that mean you’re not compatible with her?

If you’re not a confident guy and tend to feel nervous around women, most of the awkwardness is probably being created by you. When it comes to the human mating dance, it is up to the man to lead the way by being confident and making both himself and the woman feel comfortable. It’s not a woman’s role to be gentle with you and guide you through a sexual courtship if you’re a nervous, shy type.

When I was nervous and unsure of myself around women, most women didn’t like me and I couldn’t get laid or get a girlfriend. However, when I became more confident, masculine and socially intelligent, most women I was meeting liked me and were open to the conversation. I became more attractive and more compatible to women (mentally, socially and emotionally) by becoming a more confident, masculine guy.

Recovering From a Bad First Impression

Many guys who come to me for help have made a bad first impression on a girl (e.g. being too nice, being really nervous, etc) and now want to get another chance with her. You definitely can recover from a bad first impression and make her feel more attracted to you, but if there is no real compatibility between you and her at all, then it’s never going to feel right.

If you know a woman already and get along really well with her, but have simply made mistakes that have placed you in the friend zone, then you are compatible with her, but are currently not attractive to her. So, you just need to focus on becoming more confident, masculine and socially intelligent and the spark between you and her will ignite.