Sexual Conversation Examples to Use When Meeting Women

Here are a couple of examples of sexual things that you can say to a woman when you meet her for the first time.

The first example is…

1. When she is tapping her straw up and down in her drink 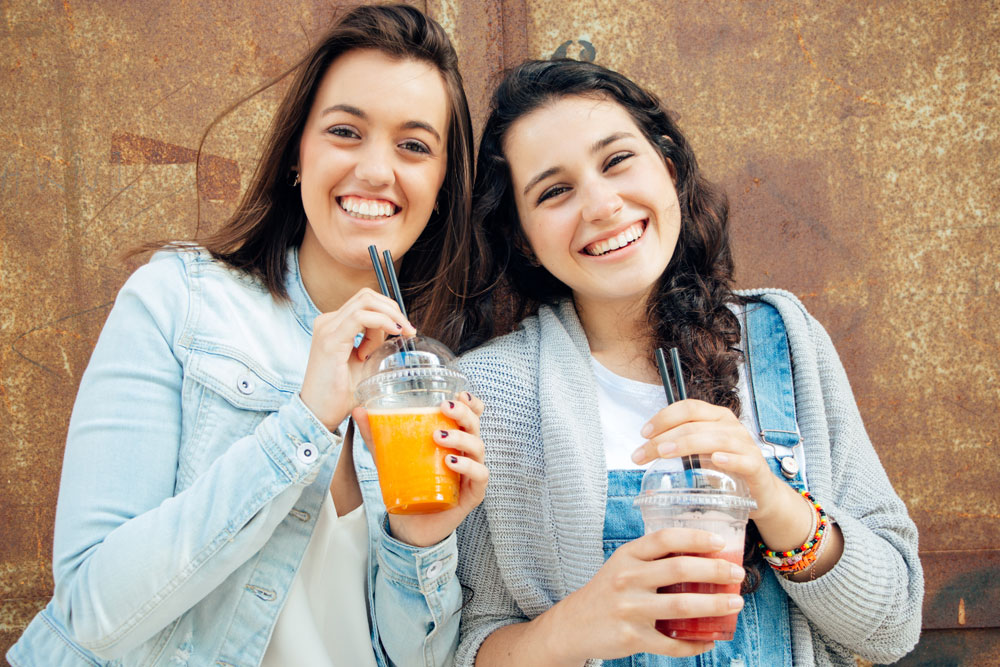 Her: [Most-likely laughing, feeling self-conscious and stopping what she was doing]

You: [Smile and say] You were slamming that straw up and down there…it was like, “Bang…bang…bang!” You’re naughty, but I like it.

You can then have a laugh with her about it. In this case, you are making a joke about her raising the straw up and down in her drink by looking at it as her being sexually suggestive.

2. When she is stroking a bottle or glass up and down

You: [Smile and look at her fingers stroking the bottle up and down, look her in the eyes and the back to the bottle. Then have a bit of a laugh as you say] Look at you…you’re going to town on that bottle.

Her: [Most-likely laughing, feeling self-conscious and stopping what she was doing]

You: [Smile and say] I didn’t know you felt that way about long, thick bottles.

You can then have a laugh with her about it. In this case, you are suggesting that she is stroking the bottle in a sexually suggestive way. When referring to the long, thick bottle, you are obviously referring to a penis.

At this point, some guys might be worried and think, “But, I don’t have a long, thick penis…I just have an average one.” Yeah, so do I, but girls don’t care about that. As long as you are making her feel turned on by you, she will enjoy the feeling of your dick sliding into her even if it average or a bit smaller than average.

As women often say, “It’s what a guy does with it that counts” and by that they basically mean that if your behavior, vibe, body language and actions are turning her on, she will not be worried about the size of your junk.

For example: If you’re not worried about trying to look good and are simply being present and giving her your raw, confident masculinity.

When a woman sees that you’re not worried and are just being a raw, masculine man, she naturally feels feminine and it triggers a deep, sexual attraction for you. Then, anything that you are doing to her physically feels all the more better because she is mentally and emotionally turned on.

Yes, it is true that some women out there only want a huge, baby-arm sized penis, but most women really don’t care about the size. Personally speaking, I’ve had sex with more than 250 women and none of them ever complained, even though mine is just average sized.

So, don’t ever worry about making jokes about long, thick bottles if a woman is stroking a beer bottle or a long, thick champagne glass if you don’t have a monster-sized penis. Just focus on making her feel attracted to you and then escalate to kissing and sex. Both of you will then be feeling reeeeal good.

When Not to Say Something Sexual

Have you ever noticed that some guys are able to say very sexual things to women and get a laugh, a kiss and then get laid, whereas other guys get scorned, told off and rejected?

Before you say anything sexual to a woman, you must make sure that you are triggering her feelings of sexual attraction for you.

For example: If a nervous guy starts talking to a woman and is trying hard to be “liked” by her for being a nice guy, then she’s not going to like it when he switches the conversation to become more sexual.

However, if a confident guy is talking to a woman and is triggering her feelings of attraction (e.g. by being confident, charismatic, masculine, charming, funny, etc), then she will be much more likely to love it and laugh when he says something sexual.

How about you? Do you know how to trigger a woman’s feelings of sexual attraction for you when you interact with her? Watch this video to find out…

As you will discover from the video above, you have a lot of control over how much or little attraction a woman feels for you. If you want women to enjoy it when you bring up something sexual in a conversation, make sure that you focus on making her feel attracted to you first.

If a woman feels sexually attracted to you, she will also then be interested in talking to you further, connecting with and ultimately, kissing you, having sex with you and beginning a relationship with you if that’s what you both want.

Mistakes That Turn a Woman Off the Idea of Sex

It’s actually very easy to attract a woman and make her feel open to the idea of flirting about her sexual interest or talking about sex with you.

However, when a guy makes one of the following classic mistakes, most women raise their guard and become closed off sexually…

There’s nothing wrong with being a good guy, having manners, respecting women and treating women well.

However, if a guy is being too nice to a woman in the hope that it makes her like him enough to “give him a chance” to have sex with her, he will almost always get rejected.

As you will discover from the video above, a woman will actually appreciate the fact that you are a nice guy (or a good guy) if you first make her feel sexually attracted to you.

2. Being insecure about his sex appeal to her

Guys often don’t realize the fact that most women are much more attracted to a guy’s confidence, personality, behavior and vibe than his looks.

Yes, some women only want a tall, perfect looking, male model with loads of money. Yet, the majority of women are much more flexible about what they find sexually attractive and appealing in guys.

When a guy lacks confidence in his sex appeal to a woman, he will often display behaviors that will turn her off.

For example: He will find it difficult to maintain eye contact with her, he will hesitate to touch her, he will try really hard to impress her and he will generally come across in a way that suggests she is much more sexually valuable than he is.

If he then tries to bring up sex when talking to her, make sexual comments or add in innuendos, the woman will almost always react in a negative way. She will accuse him of being rude, tell him that she doesn’t like to be spoken to in that way or act offended.

3. Making her feel as though she is emotionally stronger than he is

If a woman gets the sense that a guy feels intimidated by her and the interaction, she will naturally feel turned off by him because women are sexually attracted to the strength in men and turned off by the weakness.

For example: If a guy appears nervous when she challenges him during conversation, or if he scrambles for something to say if she suddenly stops contributing to the conversation.

For a woman to feel sexually turned on, she needs to feel as though the man is mentally and emotionally strong enough to handle any challenging behavior that she tests him with.

If he crumbles when he challenges her, she knows that he doesn’t have what it takes to give her the type of dating, sex and relationship experience that she really wants.

If she hooked up with him, she would have to go easy on the testing and just be very submissive, otherwise he would feel as though he is getting rejected and give up. If she got into a relationship with him, he would most likely becoming clingy, needy, insecure and jealous if she gradually tested him by pulling back some of her interest and affection.

So, rather than having to deal with all that emotional crap, she would rather just reject him and hope to be approached by a confident, alpha male instead.

4. Being sleazy, rather than using classy flirting

Some guys have absolutely no idea how to flirt or use body language to seduce a woman. Being too forward, sleazy, crass or vulgar or touching a woman in ways that she finds offensive, only serves in making her feel tense, defensive and completely turned off.

Talking About Sex With a Woman You’ve Just Met

These days, most women that you will meet at a bar, party, nightclub or social event have had plenty of sexual experience and have probably had a one night stand or had sex on a first date.

So, when you’re talking to a woman at a bar, party, nightclub or social event, don’t talk to her like she is the most innocent little angel on Earth.

In most cases, she has had sex recently and will be open to more of it if the vibe feels right with you.

You and a woman have been talking for more than 20 minutes straight, so she is obviously interested in you. During that time, you and her have gradually moved away from the group that she was in or you were in and you are exclusively focused on talking to each other.

You are flirting and laughing together and she seems relaxed and comfortable around you. At this point, you don’t have to bring up sex, but you can if you are feeling daring and just want to go with the flow and see what happens.

Some examples of what to say include:

However, just remember the most important thing of all…

Attraction comes first and everything else follows on naturally after that.

What Do Women Fantasize About?

I Feel Depressed and Lonely: How Can I Be Happier and Have More Friends?