In this post, I’m going to share three examples of what to say to make a woman melt.

1. When you meet a woman for the first time

Imagine that you are in a bar or club and you have approached a beautiful woman that you feel attracted to.

At some point in the beginning stages of your conversation with her, you are probably going to ask her what she does for a living.

She then tells you that she is a secretary.

What are you going to say next?

What most guys will say at this point is, “Oh, that’s nice. Do you like being a secretary?” or, “Oh, sure. How long have you been doing that?” and they will continue having the kind of predictable conversation with her that she’s probably had with hundreds of guys before.

It might make her look at you and think, “He’s sweet,” or “He seems like a nice guy,” but these are the types of feelings that make her see you in a neutral way or as a friend, it’s not going to make her think, “Wow, this guy is so sexy! I want to be with him right now!”

So, rather than say what every other guy would say, when a woman says that she’s a secretary, a good way to reply that will spark her feelings of attraction for you is to say something like, “Hmmm, a secretary. Naughty and nice all in one sexy package. I like it.”

By referring to her as being both naughty and nice, you are implying that you see her as being more than just the serious business woman, while at the same time you’re making her feel relaxed by telling her that you think she’s also nice and that you respect her.

At the same time, by calling her naughty and sexy, you are making it clear to her that you find her sexually attractive and you want to have sex with her.

When you say this in a joking, fun, teasing way, she will feel turned on, because she will see that you are not feeling intimated by her, or feeling insecure about how she will react.

Women love it when a guy can be confident enough to say something funny like that without being sleazy or feeling self-conscious about it.

What most beautiful women are hoping to experience is to meet a guy who will not feel intimidated by them, but who can also chat to them in a cool, relaxed, easy going way, without him trying to impress them by pretending to be someone he’s not deep down inside.

2. When you are on a first or second date

Some guys make the mistake of thinking that to get a woman to want to have sex and be his girlfriend, he has to impress her on a date by taking her to the most expensive restaurant, being super nice to her and basically doing whatever she wants him to do so that she will like him.

Although there is nothing wrong with being nice to a woman and spoiling her on a date, it’s not the main thing that’s going to make her melt and want to have sex with you.

So, when you’re on a first or second date, you have to focus on making her feel sexually attracted to you without worrying about doing and saying everything right.

Not only is it impossible for a guy to live up to some imaginary ideal he might have created about what a woman wants from a man, eventually she will realize that he’s not actually being himself and that everything he is doing is just an act to impress and please her, and she will feel turned off because he is not giving her the opportunity to connect with the real him.

If you’re on a first or second date with a woman and it’s clear that you’re both having a good time, a way to make her melt and feel even more sexually attracted to you is to make her laugh.

For example: If you’re out at a restaurant eating together and she drops her fork, spills some of her drink, or does something a little bit clumsy, you can say…

What’s happening here is that you are being confident and funny, which is going to make her feel even more sexually attracted to you.

3. When you’re in a relationship 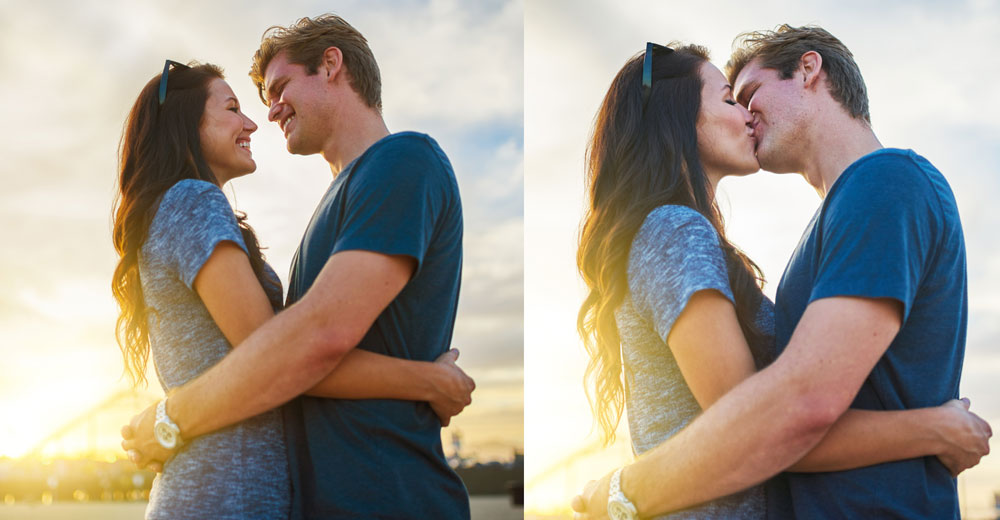 If the spark has gone out of your relationship, getting you girlfriend or wife to melt is not as difficult as it might seem.

Even if, right now, she is saying things like, “I’m too tired,” or “I’m just not in the mood,” it’s up to you to take the lead and re-spark your woman’s feelings of sexual attraction.

Break down her walls of resistance and self-doubt that have built up over time, and tell her, “You are the sexiest woman in the world to me. Every day you just get more beautiful and sexier. I love the way you smell and the way your skin feels when I touch you.”

Hold her and let her feel your desire for her. Keep making her feel attracted by maintaining your confidence no matter how much she tries to resist you. Eventually, her defenses will drop and she will begin to melt in your arms.

What makes a woman melt is a man’s ability to trigger her feelings of sexual attraction, and then build on those feelings as she continues to talk to him and interact with him.

If you focus on making a woman feel sexually attracted to you when you interact with her (when you meet her for the first time, on a date, or even in a relationship), she will not be able to help herself from wanting you.

Then, almost anything you say to a woman will make her melt and feel lust and love for you. Why? You will also be making her feel attracted to you in many other ways (e.g. via your confidence, by making her laugh, by making her feel feminine and girly in contrast to your masculine vibe).

The examples of what to say to a woman to make her melt that I have provided in this post will definitely make you stand out from other guys who are using the same old lines. They will also help you have better dates and get some of the spark back in a relationship.

However, just make sure that you focus on making a woman feel attracted to you as well as using the examples of what to say.

A woman isn’t going to care if your lines are fresh and different, if you’re not also making her feel attracted to you in other ways (e.g. by being confident and charismatic, making her feel girly and feminine in response to your masculine vibe, making her laugh).

Attraction always has to come first (i.e. by displaying confidence, being present in the moment, having relaxed and confident body language) and it also has to be built on as the interaction continues (i.e. by remaining confident, having a confident, easy-going tone of voice, etc).

If a guy starts off a conversation with a woman using a great line, but the rest of his behavior is nervous and awkward around her, a woman isn’t going to melt just because his opening line was good.

Women are attracted to the strength in men and repelled by weakness, so even if a guy starts off by saying something interesting that makes her drop her guard and feel attracted to him, if his behavior doesn’t back up his words, (i.e. his words are confident but his behavior is insecure and self-doubting) she will lose interest in him.

Although a woman might initially think, “Hmmm, this guy sounds interesting; not like all those other guys hitting on me. I wonder what else is different about him,” if he then becomes nervous, insecure or tries too hard to impress her, she will end up feeling let down.

She will likely think to herself, “What a pity. He seemed so different from all the other guys, but in the end he was just like everyone else,” and she will either just smile politely and excuse herself at the first opportunity, or she will just switch off and ignore him.

Essentially, if you want to make a woman melt, the main thing you need to remember is that what makes a woman want you sexually or to be your girlfriend, is your ability to trigger her feelings of sexual attraction by displaying the personality traits and behaviors that women naturally find attractive, and then to build on that as she continues to interact with you.

If you can do that, it won’t really matter to her what you say, because she will be feeling attracted to you for many other reasons (e.g. your confidence, charisma, how you make her feel in contrast to your masculine vibe).

Just remember to focus on attraction as well as what you’re saying. If you can do that, you will naturally make women melt and they will gladly hook up with you for sex and begin a relationship with you.

How to Pick Up Women on Valentine’s Day

What to Talk About With Women