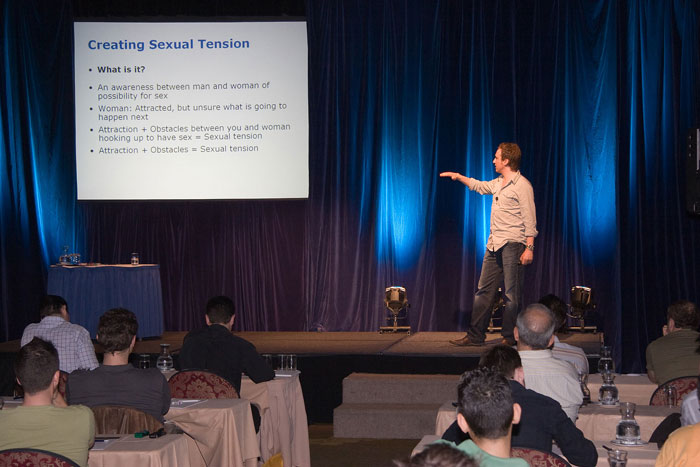 Welcome to The Modern Man.

Today’s dating scene is completely different to the dating and relationship scene that our parents and grandparents experienced.

These days, most women are open to having sex with guys on the first night or first date as a way of starting a “test” relationship. In the past, a man would have to court a woman for months or years before he could eventually marry her and then have sex on the wedding night.

Today, sex happens much more quickly and earlier on in the relationship. However, you won’t hear women going around and admitting it though because women still have to present an image of being innocent women who wouldn’t have casual sex.

Most guys are afraid to approach women, so they usually end up trying their luck at online dating. Yet, online dating isn’t as good for men as it is for women.

Instead of trying to compete with 1,000s of guys for one, average looking woman on an online dating site, what you need to do is be confident enough to approach women that you find attractive in real life.

Then, when you approach them, you have to focus on actively making the woman feel attracted to you based on what you’re saying and doing (e.g. being charming, using humor, being confident, using flirting, having a masculine vibe, etc).

As you will from the video above, every man has the capacity to attract women. You don’t have to be tall, rich or handsome to attract the majority of women. However, if you hide behind online dating, women WILL judge you on your looks, height and financial status.

Why? Online, she has to choose between hundreds, if not, thousands of men who want to meet her. So, it’s only natural that she will begin to get picky and start selecting men based on looks, money and height.

Does your body language and vibe make her feel girly in your presence, or does she feel like she has to be gentle with you because you’re insecure and nervous around her?

That is what really counts. It’s about how you make a woman feel. You’re either interacting with women in a way that makes them feel attracted to you, or you’re not. It’s pretty much as simple as that.

Who Am I and Why Should You Learn About Dating Women From Me?

My name is Dan Bacon and I used to be hopeless with women. I was too nervous, too shy and too nice when I met a woman I really liked. Around beautiful women, I would feel initimdated, unworthy and insecure. All of this caused a LOT of problems in my dating life, to the point where I was single and alone for YEARS.

Women are attracted to the strength in men (e.g. confidence) and turned off by the weakness (e.g. nervousness, shyness, insecurity, clingy behavior, etc). No matter how many times I tried to meet and date women, I would always end up getting rejected or placed in the friend zone by the types of women I really wanted. I was able to get lucky with some unattractive women or with drunk women who would wake up in the morning and realize their mistake, but I wasn’t able to have my choice with women.

So, I did something about it.

Listen to the audio below to hear where I went wrong with women, how I fixed it and how my techniques can instantly transform your dating life with women.