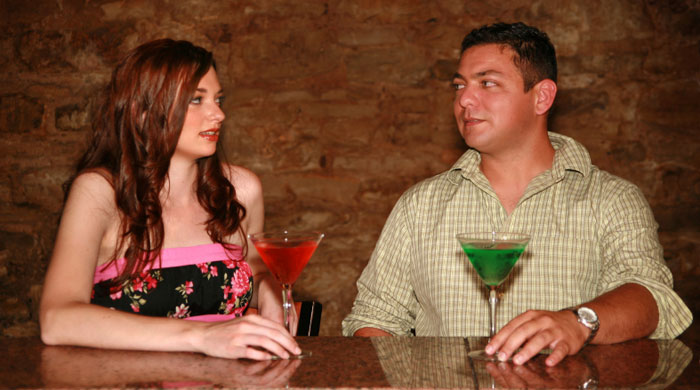 Why Do I Get Nervous When I Talk to Women I Like?

The reason why you feel nervous when talking to a woman you like is that you are thinking in a way that creates a feeling of nervousness.

An alpha male thinks in a way that creates a feeling of confidence for himself, whereas you fill your head with all sorts of doubts and worries and then feel nervous as a result.

The type of thinking that will make you nervous:

“She probably doesn’t like me. I will run out of things to say. She’s too good for me. I look nervous. She is cooler than me. She’s out of my league.”

The type of thinking that will temporarily allow you to feel confident:

“I always see beautiful women with ugly, short, overweight, skinny and ordinary looking guys. I’m a good, decent guy and I deserve a quality woman. Women feel attraction to a guy’s confidence, so the more confident I allow myself to be while talking to her, the more naturally attracted she will be. This girl will probably want to have sex with me or be my girlfriend if we keep talking. I’m just going to continue allowing myself to feel confident and see where it goes.”

How a confident, alpha male thinks:

“She likes me. She wishes she could have sex with me or be my girlfriend. This is so easy.”

Women Are Looking For Sex, Love and Relationships Too…it’s Not Just You Who Wants it

Personally speaking, I know that women are just as keen to meet a guy as we are to meet a woman.

So, when I talk to a woman, I know that she is secretly happy about having the chance to potentially meet a new lover or boyfriend. She may act as though it’s not a big deal for her, but inside she is excited and curious to get to know you and see where it goes.

As you may know, women don’t go around approaching men (it is our role to approach them), so when you approach, it is her opportunity to potentially meet a guy for sex or a relationship. She knows that and she is happy that she has another opportunity to hopefully meet a confident guy who is compatible with her.

I also know that women are attracted to the strength in men and turned off by the weakness. So, when I talk to a woman, I know that she will naturally and automatically feel attraction for me based on my confidence. I worked out the secrets to confidence many years ago and haven’t felt nervous around a woman since.

When growing up, if a guy doesn’t have a great male role model to teach him how to be confident around women, he will often turn to what he assumes is the next best authority on understanding women – the media.

Guys like this assume that what women say or do in magazines, on TV sitcoms or in the movies is how they behave, think and act in the real world. For example: He might believe that women are difficult to approach and may slap or tip a drink over his head if he approaches, because that is what happens on TV and in the movies.

Why does it happen on TV in the movies? It’s entertainment! It gets people laughing (not me, I think it’s stupid). If TV sitcoms and the movies just showed everything going perfectly well for everyone all the time, people would get bored of watching it, true?

To make it entertaining to watch, women in the movies and on TV are usually very emotional, stuck up, aggressive, weird or mean and bitchy. They play hard to get and make it almost impossible for guys to pick them up. The male characters (usually a loveable loser type character) do all sorts of amazing things to try and impress the woman and hopefully get her to like him.

He saves the day, saves the world or saves the girl and THEN the girl likes him. After watching a lot of TV, Hollywood movies and music videos, many guys begin to confuse what they see on TV and in the movies with real life. They don’t realize that most women are really nice people and will be very friendly and open if a guy approaches in a confident, easy-going way.

Why Else Do Guys Feel Nervous When Talking to Women They Like?

It’s just the way it goes.

If you want to be confident, you have to change your thinking. If you are afraid to be alpha because you think it’s about being a “bad boy,” then think again. You don’t have to be bad to be alpha, you just have to be strong (mentally and emotionally).

Here are some classic problems that guys experience, which then lead to feeling nervous when talking to women they like:

1. Lacking confidence in their sex appeal to women

When a guy feels unworthy of the woman he approaches, he will naturally begin to feel nervous around her. He’ll be worrying about making a mistake, assuming that she doesn’t like him and will be hoping to impress her and maybe get lucky.

Women sense his mental and emotional weakness and reject him. Why? Women are attracted to the strength in men and turned off by the weakness.

The secret to overcome this lack of confidence is to improve your ability to trigger feelings of sexual attraction inside of a woman. When you are able to actively attract women, you will instantly begin to see that they like you and are interested in you.

When you see that you’re able to easily attract women, then there’s nothing to be nervous about anymore because you know that you can get most women to like you very quickly. Here’s how it works…

3. Waiting for the woman to make the first move

Sometimes, women will make it very obvious that they like a guy and will be very open and approachable (e.g. like in the photo above).

However, 99% of the time, they don’t want to make it too easy for guys to approach them. Why? If they were always open and available, nervous, self-doubting guys would feel confident enough to approach them.

Why don’t women want that?

What would women do to the strength of humanity if they rewarded a guy’s self-doubt and nervousness with sex, love and devotion? After a few generations, the human race would likely become very scared and wimpy, or women would become like men.

That’s not going to happen.

Women are instinctively programmed to breed strength, courage and confidence into the human race via men, while we men are programmed to breed healthy and beauty into it via woman. Women aren’t going to go against nature and start waving over nervous guys by saying, “Hey, don’t be afraid. Come and talk to me!”

Sure, some women will do that to play around with a guy and make fun of him in front of her friends. Some women may also do it if they are drunk. However, when the woman senses that the guy is nervous and self-doubting, she is going to feel instinctively turned off by him.

The fact is, most women like to be approached by a guy first because they want to see that he has the confidence to do it. Some very good-looking guys will get approached by women at times, but women will lose interest if they discover that the guy isn’t confident.

Other than approaching really handsome men or famous guys, women rarely approach. If you want to have your choice with women, you have to be confident enough to walk over and attract women with your confidence and personality.

4. Being completely sold on a woman immediately

Instead of using the approach that women wish that a guy would use (i.e. gradually decide whether he likes a girl or not based on her behavior, personality and looks), guys (who get nervous when talking to women they like) tend to immediately decide that they want the girl as a girlfriend before she has proven herself to be a compatible woman.

When talking to him, the woman picks up on his eagerness and notices that he is already “sold” on her. She gets the sense that he feels lucky to be talking to her. What guys like this don’t realize is that women want to feel lucky to be with the guy, not feel as though they are doing the guy a favor by being with him.

If you get excited and feel like she is “the one” before talking to her or during the first few minutes of conversation, then you will likely feel nervous and worry about stuffing up the interaction.

The secret is to be more of a challenge and make her work a little to impress you. Here’s how it works…

5. Being unable to keep a conversation going or keep it interesting

One of the keys to success with a woman is being able to engage her in an enjoyable conversation that has a sexual vibe running through it the entire time.

If the conversation goes well and the woman feels sexually attracted to you, she will naturally be open to taking things further with you. However, if the conversation is boring and doesn’t make her feel the types of emotions that she wants to feel when interacting with a possible lover or boyfriend, it’s only natural that she won’t be interested in taking things further.

Some guys think that showing a woman how nervous or intimidated he is around her, will somehow impress her and make her feel flattered. Yet, women are turned off (sexually) by men who are afraid of them.

A woman might string a guy like that along (even into a relationship for a while), but she will leave him in a second if she meets a real man.

Nervousness and anxiety are both created within your own mind. You feel nervous and anxious around women as a result of the way you think.

If you’re the sort of guy who gets nervous when talking to women you like, you need to let go of your nervousness by getting used to thinking in a more confident way.

Do Women Care if You’re Bald?