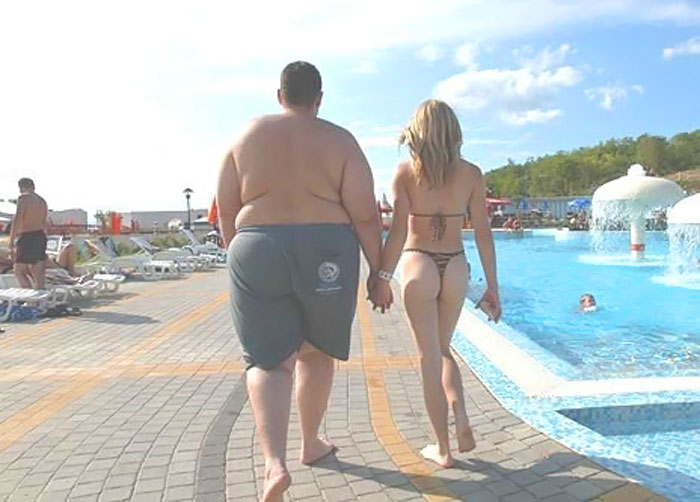 Not all women will accept a fat man, but some women will.

Many women (not all) are much more flexible about what they find attractive in a man than most guys realize.

If a fat man is able to make a woman feel attracted to him in other ways (e.g. he is confident, charismatic, charming, has a masculine vibe, makes her laugh, etc), then some women will stop caring that he doesn’t have a perfectly fit and toned body.

How is this possible?

When a woman feels attracted to a guy for other reasons, she then starts to look at his physical appearance in a more positive light. Instead of saying, “Ewww, gross – you’re fat” she will say, “I like your belly, it’s sexy” or “I like how cuddly you are.”

To guys who have been brainwashed by the media into thinking that they have to be tall, handsome and rich to attract hot women, this will come as quite a shock.

Most guys will waste their entire life thinking that they have to look perfect to attract hot women, but the truth is that you can attract women in ways other than looks, money, height and social status.

It really is true.

Yes, there are some fat men out there who only get laid because they are mega rich, but think about it…

Most guys in this world are not rich and are either working a normal job or working a fairly low paying job and just making ends meet. The reason why they can attract a hot woman is that women CAN be attracted in other ways.

Some women are extremely picky and will not accept a fat guy, but the vast majority of women are much more flexible about what they find attractive in a guy than most men realize. It really is true.

Attracting Women as a Fat Man

If you’re a fat guy and you’re looking to get laid, get a girlfriend or find yourself a wife, what you need to do is improve your ability to attract women when you interact with them.

For example: When you’re interacting with a woman, your style of conversation, your vibe and your behavior is either going to be turning her on or not. If you don’t know how to turn her on during an interaction and are actually turning her off in subtle ways (e.g. being nervous, putting on an act of being an even nicer guy than you really are, being too polite, etc), then she will begin to look at your weight in a negative light.

However, if you are turning her on during the interaction (e.g. by talking to her in a confident way, making her laugh, being masculine, having a subtly sexual vibe, etc), then she will look at your weight in a more positive light.

So, if you’ve been getting rejected by women lately and are struggling to get a date, don’t put it all down to your weight. In almost all cases, the real reason why a guy will get rejected is explained in this video…

As you will discover by watching the video above, the reason why you see other fat guys with women is that most women (not all) judge a man on his personality and confidence, rather than his looks.

If women selected men purely on physical appearance then most guys in this world wouldn’t be able to get laid or get a girlfriend, because most guys are tall, handsome male models with a perfect body.

Most guys are either fat, thin or have an average body type and they are still able to get laid, get a girlfriend or get married to a hot woman because it really is true that women can be attracted in ways other than looks, money, muscles and social status.

If a good-looking guy is nervous around women and doubts himself, most women won’t feel much or any attraction for him. Women will see him as being “good-looking,” but since he lacks confidence (the most important thing to a woman) and isn’t very masculine (in the way he thinks and behaves), most women just won’t be very interested.

Why? Women are attracted to the strength in men (e.g. confidence, masculinity) and turned off by the weakness (e.g. nervousness, shyness, insecurity). Some women (usually unattractive, drunk, old or desperate women) will accept an insecure good looking guy, but most women won’t.

I know that it’s hard to believe, especially when all that you see on TV commercials are messages suggesting that you have to be tall, good-looking and have six pack abs to be attractive to women, but if you want to stop wasting your life thinking that you’re not good enough for women, you have to accept that most women do not solely judge a man on his looks.

When a fat guy asks me, “Do women like fat men?” it is usually because he is self-conscious about being overweight and feels as though he doesn’t fit the stereotype that is pushed by TV commercials and magazines.

In fact, most guys who ask me “Do women like fat men?” already believe that their weight (not their inability to attract a woman during a conversation) is what has been preventing them from enjoying the success with women they want.

If you’re asking, “Do women like fat men?” because you have insecurities about your weight, then it is clear that you currently don’t have the number one trait that women look for in a man: Confidence.

Likewise, if you’re a guy of normal weight with insecurities and a lack of self-confidence, then you’re not any more attractive than an insecure fat guy.

Almost all women (excluding unattractive women) are turned off by insecure men. Women instinctively feel attracted to confident men because we live in a challenging world and it often takes confidence, courage and strength of character to push onwards to success.

Guys who lack confidence in themselves make a woman’s instincts trigger feelings of repulsion. Instinctively, she doesn’t want to get stuck with a guy who will crumble under pressure if life gets tough, or who will become insecure and controlling in a relationship.

A guy might look good on the outside, but if is shy or nervous around women, then he simply doesn’t have the qualities that women instinctively feel attracted to in a man.

If you want to go through life believing that women don’t like fat men, then you’re going to have to lie to yourself EVERY TIME you see a woman with a fat man from now on.

You’re going to come up with an excuse like, “Oh, he must be rich” or “He must be well hung” instead of accepting the truth that women can be attracted to men for a variety of reasons that have nothing to do with looks, money or social status.

The world may have changed beyond all recognition over the last few thousand years, but women are still looking for a man who can protect them and keep them safe.

Whether a guy is short, tall, thin or overweight, the main thing that a woman looks for is whether or not he will be able to keep her safe and gather enough resources to survive and live a good life.

In other words, her instincts will be telling her whether or not you’d be good at surviving, thriving and prospering in this world. If she gets the sense that you lack the mental and emotional strength to make her feel safe and protected, she will naturally feel turned off by you whether you have a fat, thin, average or althletic physique.

A man with the type of confidence that is attractive to women is a man who knows what he wants, how to get it and will stop at nothing until he achieves it. He believes in himself and pushes forward with unrelenting confidence and determination until he achieves his goal.

Women are naturally attracted to men like this because they give a woman a feeling of safety and protection, where she can relax into being the woman and let him lead the way as the man.

A truly confident guy doesn’t need to pretend to be anything other than himself – he knows who he is and he is confident in himself. So, faking confidence as the “larger than life” happy, fat man won’t wash with women if it doesn’t truly match up with your body language, thinking, words and actions.

If you want to attract women with your confidence, it has to be authentic. You have to truly believe that you are good enough for her and you will be able to achieve whatever you want to achieve in life.

Genuine masculinity isn’t about loud, chest beating, macho and over-the-top behavior; it’s about how you think, behave, speak and take action as a man.

Being masculine means that you display the type of alpha male qualities that make other men respect you. When you have true masculinity, women literally feel “weak at the knees” around you and that is a feeling they simply cannot resist.

It doesn’t matter if you are fat, short or bald – if you can make a woman feel that way, she will be unable to stop herself from feeling attracted to you. A woman’s attraction a man’s masculinity is automatic and instinctive and cannot be turned off.

Of course, there are some women out there who like wimpy, feminine guys, but as you may have noticed, those women are usually very masculine or unattractive. If you want to attract a beautiful, feminine woman, you need to display masculinity when you interact with her.

In today’s world, being successful at life has a lot to do with your ability to communicate and get along with other people. Without a high level of social intelligence, you are usually less favored by people, get promoted less often and have less friends than the average person.

To a woman, this makes you a much less attractive man than one who has the social skills needed to get along well with others and be a better protector and provider for her, yourself and any offspring that you may have together as a couple.

On the other hand, when you can display the type of social intelligence that naturally attracts women, you will find it incredibly easy to get laid or get a girlfriend…

Why Are Women So Stuck Up?

How to Be Cooler as a Guy