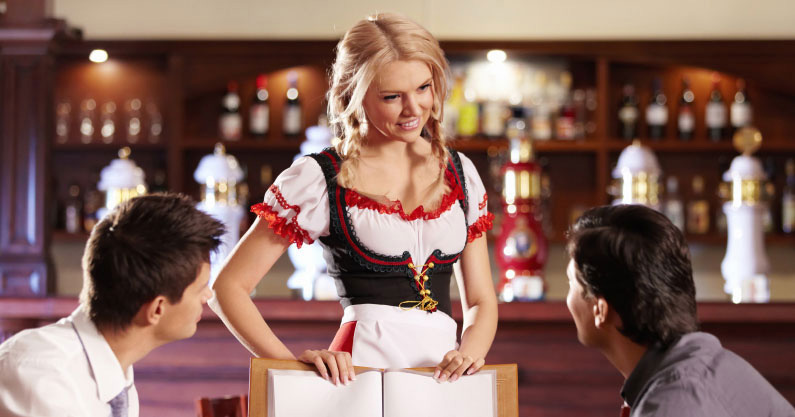 Flirting with a woman is essentially about:

You can use flirting body language or you can flirt with your words. Flirting is most powerful if you are confident and charismatic. If you try to flirt with a woman and come across as nervous, shy or intimidated by her, then she won’t really enjoy it. Why?

For flirting to feel right to a woman, she needs to feel attracted for you. Women are mostly attracted to a man’s strength (e.g. confidence, masculinity) and are turned off by any emotional weaknesses (e.g. nervousness, shyness, anxiety).

Imagine that you’re talking to the waitress in the photo above. Here’s an example of flirting during conversation:

Instead of just being a standard nice guy and ordering your food like a normal customer, switch things up and be right there with her in the moment. Focus your attraction on her and let her experience your charisma and confidence via flirting.

When you add in flirting when talking to women, you will be simply amazed at what happens. Suddenly, beautiful women who never paid you any attention will show you loads of sexual interest.

Who Am I and What Do I Know About Flirting?

My name is Dan Bacon and I discovered the art of flirting when I had hit rock bottom in my dating life. Most women would only ever see me as friend (or nothing at all), rather than a potential lover or boyfriend because I was always being too nice, too polite and lacking the all-important sexual vibe that flirting creates.

If I did manage to get lucky and start dating a woman, it was usually with unattractive women that I didn’t even like. After getting tired of settling for second best, I decided to work out what it takes to be successful with women. Here’s a before and after photo of me…

Look at how nervous I was in the beginning. This girl actually liked me and even gave me her phone number, but I screwed up the date because I was too nervous around her and didn’t know how to flirt or make her feel proper sexual attraction for me. I felt as though she was out of my league. Women like this forced me to become stronger by building more confidence and becoming more of a man.

…then, I became confident and this is what happened.

When I discovered flirting and the many other techniques that now I teach here at The Modern Man, women began flooding into my life. Before I knew it, I was pulling one night stands (sex on the first night) from nightclubs and dating several attractive women at once.

Flirting Communicates Your Sexual Interest in a Discreet Way

With the waitress example at the top of this page, it can be confusing for some guys to work out why that is flirting. Guys who understand and use flirting will not talk that way with women whom they are not sexually interested in.

When talking to a woman who he doesn’t want to have sex with, a guy who understands how to use flirting will either tone it down or not use it at all.

As for women, they know what flirting is and what it means, so if you flirt with a girl, she knows that you are expressing your sexual interest in her in a discreet way. Guys who don’t understand flirting are seen as uncool or lacking social intelligence by women.

When you flirt with a woman, it communicates the following message to her without you actually having to say it, “I’m attracted to you sexually and I am considering having sex with you.” However, that isn’t the best part about flirting.

The best part is that flirting also asks her the question, “Are you interested in me in a sexual way?” without you having to ask her that awkward question…EVER.

Once you have flirted with a woman, you simply need to look at her response to your flirting and you will see a clear, “Yes – I am interested in you!” or “No thanks” response based on the changes in her body language, words and behavior.

She will NOT react like women do in the movies, where they slap a guy or tip a drink over his head for flirting or showing sexual interest. In the real world, women respond with clear yes or no responses via their body language and level of participation in the flirting exchange.

If a woman flirts back at you and is enjoying the flirting exchange, it is clear sign that she is interested in you in a sexual way.

How Do You Make Women Feel Right Now?

What usually happens when you talk to a woman you like and want to have sex with? Are you usually able to make her feel sexually attracted to you,  or do most women simply talk to you in a friendly or even distant way?

When you know how to flirt with women properly, you will see a MASSIVE change in the way women treat you. For example: When I’m out at a shopping mall, I’m able to use another flirting technique that women LOVE to experience that makes women smile and flirt with me WITHOUT me having to say ANYTHING to them first.

When I started using the flirting techniques that I know teach in my advanced training programs, I went from being single and lonely to having women FLOOD into my life.

Do you want to have the same power over your dating life? Get started