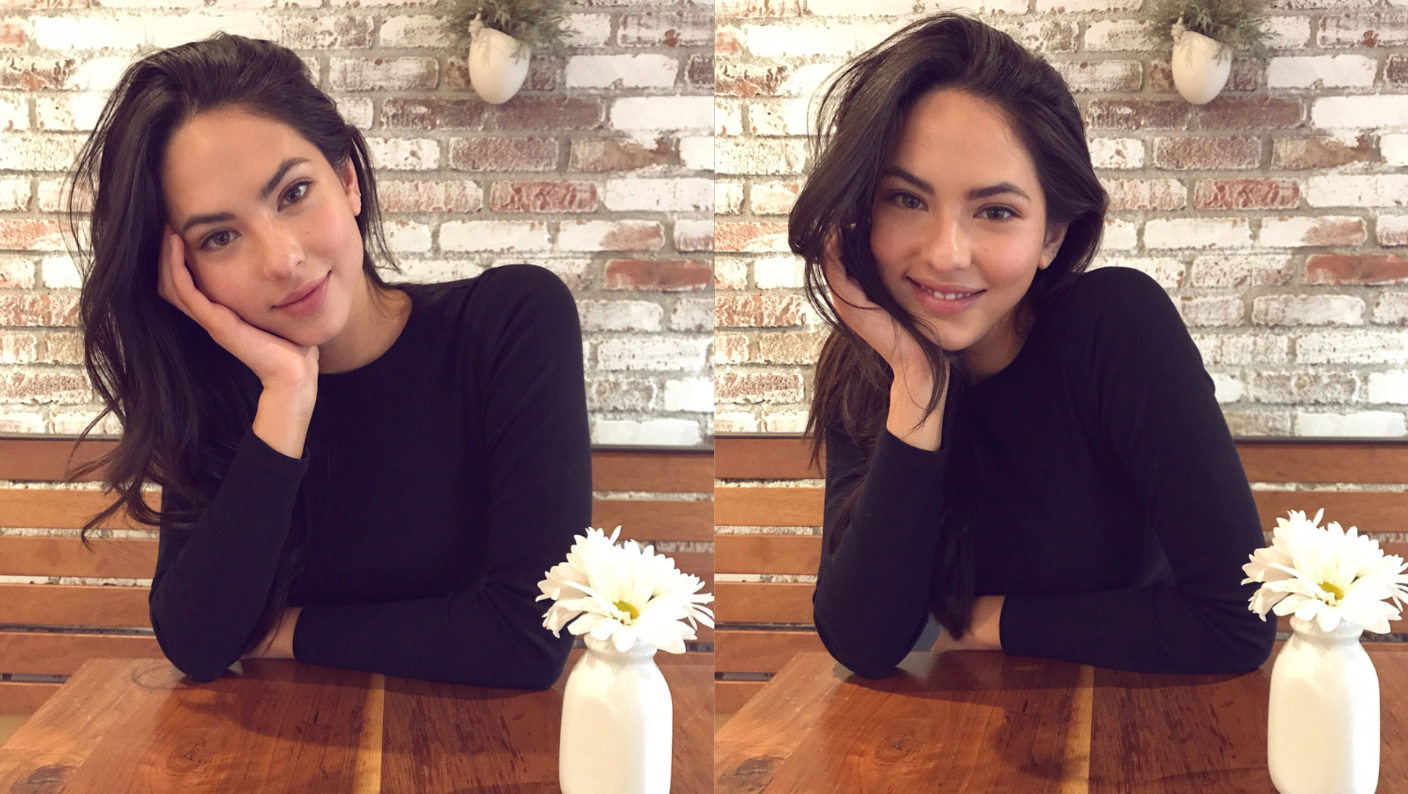 How to Get Yourself a High Quality Woman

How can you find yourself a high quality woman who not only has the type of look that you want physically, but she also has the qualities, personality and values that you like in a woman?

How can you make sure that you get yourself a high quality woman who is perfect for you?

1. Be very clear on what a high-quality woman means to you

For some guys, a high quality woman is going to mean that she is:

Now, the thing is, many guys DO have an idea of what a high quality woman means to them.

As a result, they’ll end up getting into relationships with women who really aren’t their IDEAL type of woman, who they don’t really see as being a high quality woman.

So it’s essential that you become clear on what a high quality woman means to you and then, don’t deviate from that.

Don’t accept less than that.

Say to yourself that you won’t accept anything less than what you see as a high quality woman.

For example: Some guys really like badass girls with attitude and see that as being high quality, whereas other guys like sweet, girl-next-door types.

He just wants her to be a beautiful, loving girlfriend or wife.

Some guys like women who are from the same race as them, some like to go interracial, some like women from mixed races and other guys just love all women.

Some guys prefer women who love to cook, clean and take care of their man as a great girlfriend or wife, whereas other guys aren’t really concerned about that and are more interested in finding themselves a woman who is career-driven and is interested in achieving big things outside of the home.

Essentially, you need to be very clear about what a high quality woman means to you, so you don’t end up accepting a woman who doesn’t meet your criteria.

2. Know how to attract her and connect with her when you meet her

On the other hand, some guys don’t know how to make women feel attracted to them as they talk to them and only talk to women in a friendly, neutral or nice way.

As a result, there’s no spark between himself and the high quality women that he meets.

The thing is, if a guy wants to get a low quality woman, then he doesn’t really need to do much.

He just needs to show a bit of interest in her and she’s going to be happy that a guy is interested in her.

Yet, if a guy wants to get a high quality woman, then he needs to know how to create a spark of sexual attraction inside of her and how to create the type of connection that causes her to want to get to know him more and take things to the next level with him.

3. Give yourself the chance to meet a high quality woman

For some guys, they’ll go through their everyday life and find women attractive in random places and situations, but they won’t do anything about it.

For example: A guy will be walking through a shopping mall and he’ll look into a store, see a girl that he finds attractive and just keep walking.

A guy will be sitting in a cafe or a restaurant and there’ll be a waitress there who he finds pretty and he thinks, “Wow, I’d love to have her as a girlfriend,” but he doesn’t do anything about it.

He just sits there, has his coffee, or has his meal and then leaves.

The same thing applies with bars, nightclubs and parties.

Many guys will go to a bar or nightclub or party, but they won’t approach women that they see as being high quality.

Yet, by doing that, a guy will often end up getting with women that he’s not really attracted to and that he doesn’t really want to be with.

Now, the thing is not every high quality woman is single, but the reality is that not every relationship lasts.

Many relationships end in a breakup, which results in many women becoming single again and trying to find themselves a boyfriend.

So, whether it’s a case of you going through your everyday life and seeing women that you find attractive during the day, or it’s you going out to bars or parties, you have to give yourself the chance to meet the high quality woman.

If you don’t give yourself the chance, then you can’t get her.

The reality is that 99.999999% of the high quality women that you find attractive don’t even know that you exist.

How are you going to get that high quality woman if she doesn’t even know that you exist?

The only way to let her see that you exist is to have an interaction with her.

You’ve got to be able to talk to her and create a spark, create a connection with her and take things to the next level.

The thing is, you could meet the type of high quality woman that you want the first time you try, but it might take you 5 tries.

It might take you 10 tries, but if you don’t give yourself the chance to meet her, then she’s almost certainly not going to know that you exist.

As a result, you might end up thinking that all the good women are taken, or that it’s not possible for you to get a high quality woman because the only women who seem to be interested in you, are the ones that you don’t see as being high quality.

Yet, the reality is that you’re probably not giving yourself enough of a chance to meet high quality women in person.

The thing is, in most cases, guys that you see who’ve been able to get themselves a pretty girlfriend and settle down are simply the ones who gave themselves a chance with her.

The guy talked to her so he could then attract her, connect with her and start a relationship.

If you’re one of the guys who finds it difficult to attract women when you talk to them, or if you find it difficult to connect with women or take things to the next level, then I recommend that you read my eBook, The Flow or listen to the audiobook version, The Flow on Audio.

You will learn exactly what to say and do to attract women, connect with them and take things to the next level.

When you follow the steps of The Flow, you and a woman will flow effortlessly from one step to the next.

It’s the easiest way to get laid or get a girlfriend.

Not All Pretty Women Are Confident

Don’t assume that a high quality woman is more confident than you. 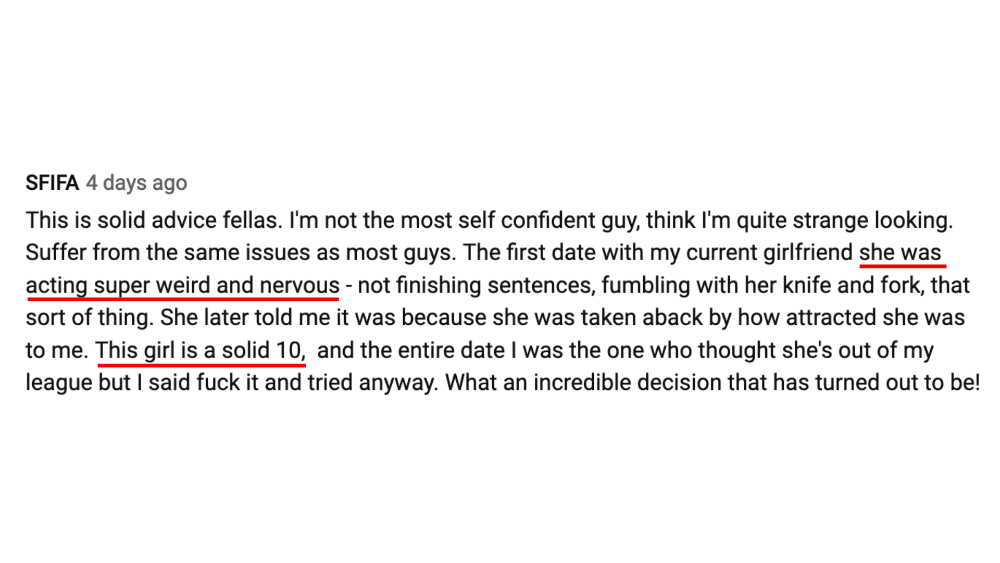 She was acting nervous and a bit weird on the date because of how attracted she felt to him.

He actually thought that she was out of his league, but he decided to just give it a try and continue moving the interaction forward and in the end, she became his girlfriend.

What’s important to understand and remember as a man, is that many women are insecure and anxious, but usually put on a great act of seeming like they are fine.

Likewise, some women will act weird and nervous when interacting with a guy for the first time or on a date and a guy will often think that it means she doesn’t like him, when in fact, she is just feeling nervous and unsure of herself around him.

This also applies to a high number of the women that you see as being high quality.

Don’t assume that because you feel attracted to her that she must be ultra-confident and she must think that you would love to get a chance with her.

In many cases, women that you see as being pretty, beautiful and high quality are actually insecure.

The reality is that many women are insecure and in many cases, it is women that YOU look at as being high quality.

So don’t count yourself out.

If you want a woman that you see as being high quality, then at least give yourself a chance.

Talk to her, make her feel attracted, connect with her and start a relationship.

This Mistake That DESTROYS Your Success With Women

How to Not Be Awkward Around Girls You Like