Every couple is different.

Yet, in most cases, the steps of dating usually follow the same basic path:

1. The woman will usually wait for the man to make the first move by approaching her and starting an interaction.

If you don’t have the confidence to approach the kinds of women you really want, watch this video…

2. As soon as he approaches, the man will begin to make her feel attracted to his personality, behavior and conversation style.

If you don’t know how to attract women when you interact with them, watch this video.

3. He will then ask for (and get) her contact details (best if it’s her phone number), or he will skip the steps of dating by kissing her and having sex with her immediately.

4. A few days later he will call her up (or contact her online if she has only given him her online details) to arrange a date.

5. On the first date, his primary responsibility is to continue building the sexual attraction between him and her.

6. At the end of the date, depending on the amount of sexual tension built up between them during the date, he will either kiss her goodbye (with the understanding that they will hook up again very soon), or they will move on to the next step, which is having sex.

7. Once they have sex, the interaction automatically goes from the casual phase to the dating phase.

8. They will then continue dating and having sex until they both decide that they want to be in an exclusive relationship with each other (or they decide to move on).

However, the most important thing is to make a woman feel sexually attracted to you right away, so that the sexual courtship can flow naturally from the one stage to the next.

It’s Up to You to Take the Lead 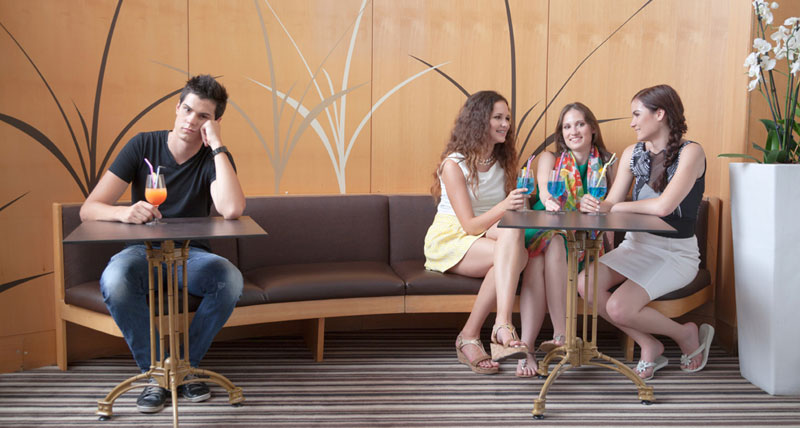 The most important step when it comes to dating is that you, as the man, take the lead.

Where guys often go wrong, is they assume that approaching a woman and asking her out is the main thing and then everything will happen all by itself. However, that’s not how it works.

Often a guy will go as far as getting a first date and maybe even a second date, yet in the end the woman will either say, “I really like you, but I only see you as a friend,” or she’ll just come out and say, “I don’t think this is working out.”

Why does this happen?

Usually this happens because the guy has failed to take the lead in the relationship, and lead him and her through the natural steps of a modern courtship.

In the past, dating wasn’t common and if a man and a woman did go out on a date, it was usually under the supervision of a suitable chaperone, so holding hands, kissing and sex was virtually impossible.

Today, however, the steps of dating have changed and a modern woman expects to hold hands, get kissed and even have sex before she makes the decision to be in a committed relationship with a man.

These days, a woman doesn’t consider herself to be a “slut,” or to be doing anything wrong when she has sex with a guy before marriage, or even if she has sex with him on the first date. Basically that’s how the world works now, and these are the normal steps of the modern relationship.

So, don’t think that you need to be a good boy who has to take a woman out on dates for weeks or months, pay for everything and never make a move to touch or kiss her until many months later.

Most women (not all) are looking for a guy who knows what he wants and who has the confidence to move the sexual courtship along quickly.

There are some women (especially in certain cultures) that still hold out from having sex too soon, or even before marriage, but in most cases, a modern woman will be eager to move things forward quickly.

If you’ve managed to create enough attraction between you and her during the date (with your confidence, charisma and conversation style, etc.), most women will usually be hoping that sex will happen right away, or at least pretty quickly, so she can then decide how she really feels about you and whether she wants to keep on dating you or not.

Some Classic Mistakes Guys Make When it Comes to Dating

Although the steps of dating are pretty simple, sometimes guys who lack experience with women make some mistakes that can easily be avoided, but end up costing them the relationship before it even gets started.

These mistakes include the following…

1. Being too much of a gentleman.

Many guys are raised by mothers who teach them that to get a woman to like them and want to be in a relationship with them, they have to behave like gentlemen.

Unfortunately, these guys make the mistake of believing that being a gentleman means that they have to be super nice to a woman and treat her like a princess and pretend that sex isn’t even something they ever think about, let alone expect to have with her sometime in the near future.

These guys may go as far as asking a woman out on a date and then spend the date pretending not to be interested in anything more than opening the passenger side car door for her to get in, pulling out her chair, and spoiling her with an expensive dinner.

That’s not what women want.

Although there is absolutely nothing wrong with being a good guy and treating a woman nicely during a date, the main thing most (not all) women want from a man when they are out on a date with him, is for him to make her feel sexually attracted to him.

Yes, a woman will enjoy the five-star treatment, but if he’s not making her feel sexually attracted, she will just assume that he only wants to be friends, and even though she may “like” him, she’s not going to see him as someone she’s going to have sex with or be in a relationship with.

So when it comes to dating, don’t waste time trying to be liked by a woman, or pretending that you’re not interested in anything sexual with her because you’re a “gentleman.”

The most important thing of all is that you start out by making her feel sexually attracted to you.

2. Taking too long to move things along.

Another classic mistake that guys who are shy, nervous and insecure around women make, is to take too long to move from one step to the next.

For example: A guy might pluck up the courage to ask a woman for her phone number, yet, when he gets it he doesn’t know what to do with it.

If he gets as far as contacting her, this guy can spend days and even weeks sending her “cute” text messages without ever getting up the courage to ask her out on a date.

Alternatively, there is the guy who gets as far as calling her up and asking her out on a date, but then fails to move things along after that, by not showing her that he’s interested in her sexually by triggering her feelings of sexual attraction for him.

What this guy doesn’t understand is that a woman will choose to have sex and date a man based on her sexual attraction for him, but she’s not going to sit forever waiting for him to move things along.

If a guy can’t “take the bull by the horns” and move things along fast enough for her, she will “switch off” and turn her attention to a guy who can turn her on, and who can then release the sexual energy that has built up inside her with kissing and sex, right away.

Just Be Yourself, But Be Attractive in How You Interact With Her

When you are the kind of guy who can trigger a woman’s sexual desire with your confidence, charisma and humor, you don’t have to worry about following some kind of dating protocol. You can just be yourself and keep moving forward through the steps of dating.

Don’t know how to make a woman feel that way? Watch this video…

Essentially, when you make a woman feel the way she wants to feel when she’s with a man (i.e. attracted, turned on, girly and feminine in comparison to your masculinity), the steps of dating will unfold naturally and all by themselves without you having to put much effort in at all.

The Coolest Guy in the World: Does He Exist?