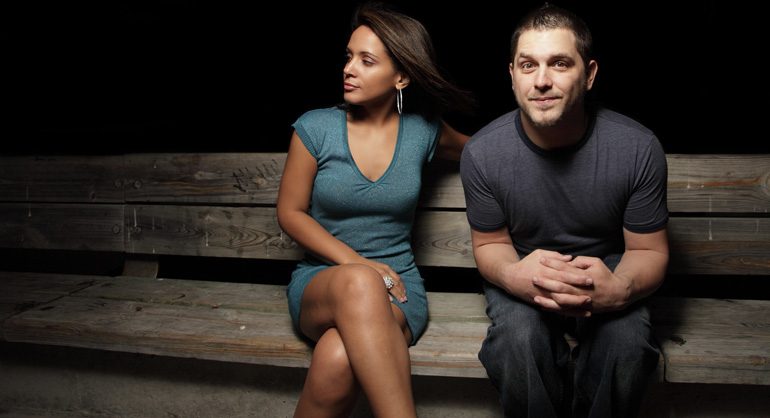 If you want to tell someone you like them (and that someone is a girl or woman), I advise you to make sure that you make her feel attracted to you first.

When a woman feels attracted to you (e.g. because of how confident and charismatic you are, how you make her laugh, etc), she will then “like” you in a sexual, romantic way as well. However, if you’re just being friendly to her (e.g. being a nice guy) then you will often get rejected.

As you will discover from the video above, you need to be careful telling a woman that you like her if you’ve been putting on an innocent friend, nice guy act around her. Women don’t get turned on by niceness, but they do appreciate it when a guy who makes her feel attracted is also a good guy.

It really depends on the woman, the situation and how you say it.

Watch this video for my full explanation on what do to…

As you will discover from the video above, a woman won’t always like it when a guy says that he likes her. For some women, it’s a bit too romantic and corny compared to the excitement of feeling attracted and then the guy having the confidence to move in for a first kiss and release the built up sexual tension with passionate sex.

After sex or at least a couple of hook ups, a woman will be dying for you to tell her how much you like her. If you don’t, she will usually try really hard to impress you and hope that you say it, or she will come out and tell you how much she likes you.

Sometimes, a Woman Knows That You Like Her and is Waiting For You to Make a Move

Some women will assume by your actions that you like her and she will then begin flirting with you and hinting at wanting something more to happen between you and her.

From there, you just need to be the man and escalate things physically and emotionally. If you don’t, a woman will often be prepared to miss out on being with you altogether, rather than have to lead you all the way through a sexual courtship.

Don’t Copy the “Lovable Losers” From TV Sitcoms and Movies

Without many or any real male role models in their life, many modern men mistakenly identify with the goofy, hopeless romantic guys who stumble romantic comedy movies desperate to win the heart of the hot girl, the cheerleader or the girl next door.

Despite all the outrageous mistakes he makes in his attempts to attract her, she eventually sees what a terrific guy he is and then he miraculously wins her heart.

The reason I say “miraculously” is because that type of guy almost never wins the heart of the stunning beauty outside of these fictional films or TV shows.

Yes, the female audience might be rooting for him to get the girl and might even briefly say, “Awww, he’s cute…I’d date him,” but once they leave the darkened theater or turn off their TV set and step outside, they’ll instantly forget that they liked the lovable loser in the movies because they will feel attraction to the confident guys they see.

Unless the woman is unattractive, lacks relationship experience or is feeling desperate for some attention, women don’t date and fall in love with guys who are like those loveable losers you see in movies.

Fictional characters like these, while often based on a real person or a compilation of several guys the writer might know in real life (often including himself), are written into these stories for comic relief.

The loveable loser guys are the butt of the jokes and because the screenwriter can control the actions of all of the characters, he can tweak the story and create a miracle before the eyes of the audience. The beautiful, sexy, popular cheerleader or stunning model suddenly falls in love with the type of guy that almost every other woman would never date.

Yeah right. It’s simply designed to make the female audience say, “Awww…how cute” and the male audience to think, “Cool! Maybe I can get a girl by being Mr. Innocent or Mr. Nervous around women I like!”

It’s likely also designed by writers who are hopeless with women and wish that the world worked the way they portrayed it on screen. Sort of like a “Hint, hint ladies! We nice guys are cool too. Don’t overlook us. Stop going for the bad boys and start choosing us nice guys.”

So, just remember: Using these lovable losers as role models of how to tell someone you like them in real life is going to steer you in the totally wrong direction.

In the real world, women will think you’re weird and lacking intelligence if you act like those guys do. Additionally, times have changed and modern women find most romantic gestures (that men have copied from the movies) to be lame, cheesy and outdated.

If you want to know how to tell someone you like them, don’t go looking to the movies. Instead of telling her that you like her, make her feel attraction for you and then guide her through the stages of a sexual courtship.

Does this sound similar to your situation? You and the woman you like are great friends and can talk about anything together.

In fact, at times it feels like you are best buddies. You hang out together and always seem to have a great time, so surely that means you are meant for each other, right? No, it means that you are friends.

If you want to have a sexual relationship with her, you need to make her feel sexual attraction for you and being a best friend doesn’t create that.

There is a big difference between friendly chemistry and sexual chemistry and that main difference is sexual attraction. So, don’t think that a strategy of “being her friend” for a long time is the answer.

All it will take for you to be shoved to the side and forgotten about is another guy to come along and quickly guide her through the stages of a sexual courtship. If he knows what he is doing with women, he can kissing her within minutes or hours and having sex with her within a very short period of time.

After that happens, you will certainly be a friend, but for how long? If her new guy gets annoyed at you hanging around her all the time, he might just tell you to steer clear and then you’ve not only lost a great friend, but another guy is now having sex with your girl.

When you behave like her friend instead of kissing her, having sex with her and being her man, it makes it more difficult to escalate the relationship from friends to lovers. If you feel as though, right now, you and her are just friends, my recommendation is not to say anything about your feelings.

Is She Sexually Attracted to You?

Since she never thought of you as more than a friend, she will most-likely try to let you down easy and won’t harshly reject you, but your relationship will never be the same.

Some guys will hang around a woman for months or even years, hoping that something will magically happen.

The entire time, the relationship has been strictly friends (and he’s likely told her many times how he “respects” that. Wooo, how gentlemanly of him), but he has always wanted more and just didn’t know how to get it. Since he didn’t know how to make her see him as a lover, a guy like this will usually just play the “nice guy” role and be her helpful friend when she needs it.

Hoping to be chosen for being a good, little boy, he makes sure that he is always at her beck and call whenever she wants to see him or needs his help with something. In short, she will call him whenever she needs a man for anything but sex.

Following what he’s seen happen in TV sitcoms and the movies, the unfortunate guy mistakenly assumed that when she finally realized what a terrific guy he was, she would naturally want him as her boyfriend.

He likely even spent many nights falling asleep and daydreaming about her saying, “I can’t hold it in any longer. I love you, I’ve always loved you!” and then they kiss and live happily ever after.

If you want to avoid being that silly guy who wastes months or years of his life using the wrong strategy and eventually being told, “I have something to tell you! I’m in love with this guy! We’ve been dating for two weeks and I wanted to tell you because you’re such a great friend!” you should never accept the role of only being her friend.

Instead, be a man and believe in yourself. She doesn’t want to have to lead you through the sexual courtship. If you want what is yours, then be man enough and take it.

She wants you to take it. If she likes you too, she’s probably hoping and waiting that you do guide her through the stages of a natural, sexual courtship.

If you have made her feel attracted to you and then proceed to the next stage of kissing and ultimately sex, then you won’t have to worry about how to tell someone you like them because you will already be in a relationship.

How to Make a Woman Laugh