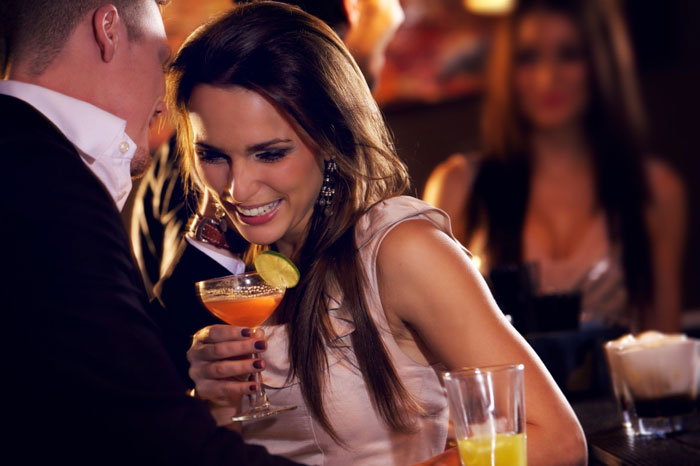 The best way to bring up sex when talking to a woman is to smile and confidently say, “You’re sexy. I like you.”

Before you tell her that you like her and find her sexy, make sure that she feels sexually attracted to you first.

If a woman isn’t attracted to a guy and he says that he likes her and thinks she is sexy, she might thank him for the compliment, but she isn’t going to think, “WOW! He likes me!”

On the other hand, if a guy has made a woman feel attracted to him first and then says that he likes her and thinks she is sexy, she will then feel lucky to finally met a guy who not only turns her on, but is charming and authentic.

Telling a woman is sexy cuts through all the mind games that tend to go on when a man and a woman aren’t being totally honest about how they feel about each other.

If a woman is interacting with a guy who is just acting like a friend, she might decide to play hard to get with him to see if he will chase her. When he begins to chase her and show lots of interest (even though she isn’t attracted), she then loses interest because he is being so desperate and clueless.

So, to cut through all the BS games and get right to the point, start by making her feel attracted to you (e.g. by being confident, charismatic, funny, having a masculine vibe, etc) and then tell her that you like her and think she is sexy.

As you will discover from the video above, you can attract women in many different ways at once.

When a woman is attracted to you, she will then be much more open and interested in having a sexually charged conversation with you.

Most Women Are Insecure About Their Sex Appeal

Most guys have no idea how insecure women really are.

For example: According to the global study carried out by Dove cosmetics, 96% of women do not consider themselves to be beautiful.

Well, it is nuts, but it’s also a huge opportunity for you to get what you want with women.

When you are the confident, charismatic guy who makes a woman feel attracted and then ALSO give her a sexual compliment, she then feels excited to be interacting with you (because she feels attracted to you) and feels confident that you like her (because you’ve given her the direct compliment.

Of course, almost all women ACT like they think they are extremely beautiful, sexy and desirable. However, statistically speaking, most women are insecure.

I know this from my personal experiences of picking up and having sex with more than 250 women. While some women are very confident in their sex appeal, they always have something about their physical appearance (e.g. nose, hair, skin, hips, etc) that they wish they could change.

So, make sure that you don’t hide behind the act of being an innocent nice guy when you talk to women. Be direct and after you’ve triggered her attraction for you, go ahead and tell her that you find her sexy.

As you will discover from the video above, there’s nothing wrong with being nice to a woman, but niceness isn’t the thing that makes her wet.

Most guys don’t know that simple difference between being seen as a charming guy rather than a nice guy. Now that you know it, make sure that you use it to your advantage the next time you talk to an attractive woman.

Talking About Sex With a Woman You Already Know

If you don’t have the confidence to pull of a statement like, “You’re sexy. I like you” then simply focus on flirting and creating sexual tension between you and her instead.

Flirting is a subtle language that is spoken between a man and woman, which essentially communicates, “Hey, I want to sex with you. Do you want to have sex with me?” without EVER having to say that or ask that type of question.

You can flirt with a woman via your body language, behavior, words, vibe and actions.

A classic example of using words to flirt with a woman and bring up sex while talking to her is when she says something in a conversation like, “I’m good with my hands.”

To flirt with her, your response needs to be a confident smile and a bit of a laugh, then say, “Ohhhhh, okay…” and then just let her realize what has just happened.

If she is attracted to you and is open to flirting with you, she will continue on with the joke about being good with her hands and will become sexually suggestive.

For example: She might then say that if you play your cards right, you might be able to see what else her hands can do.

Taking the Next Step

Once flirting has opened up the channels of sexual communication and you both know where the interaction is heading (i.e. to kissing, sex or at least the exchange of contact details), talking about having sex will naturally begin to happen, because you will both know that it is now appropriate and fun to talk about sex with each other.

Some women are very open to talking about sex, but most are a bit shy about admitting how much they want it. So, you should only talk about sex sparingly and then get back to connecting with her and moving towards a kiss and then actual sex.

1. Thinking he has to talk about sex to get sex

Some guys assume that if they talk about sex with a woman, it will turn her on and they will then get sex.

In the real world, most women (not all) are much more subtle about how they express their sexual interest in a guy and prefer to use flirting to get the message across.

2. Being too pushy about it

When a woman shows sexual interest in a guy, he might make the classic mistake of becoming so eager to close the deal that he becomes pushy and demanding about it.

If he is like most guys who don’t have much luck with women, he will know that he is just getting lucky, so he wants to make sure that he acts fast before she changes her mind. Although she might be interested in having sex with him to begin with, if he pushes and she feels his desperation, she will be turned off immediately.

3. Not using sexual body language to turn her on

Sexual body language is a vital component of the human mating dance; too little and she won’t respond, too much and she’ll feel threatened or feel like the guy is being too sleazy.

Knowing the right amount of sexual body language to use is a subtle art.

Likewise, touching a woman in a confident, charming way is sexy and will turn her on, but touching her in a nervous, tense or hesitant way will usually cause a woman to either reject the guy or retreat from him because she feels uncomfortable.

4. Putting her on a pedestal and expecting her to take the lead

If a guy lacks confidence in his sex appeal to women, he will usually believe that most women are better than him and that he will have to get lucky if he’s ever going to get a chance with an attractive woman.

When a guy like that talks to an attractive woman and she happens to show a bit of sexual interest, he will usually mess it up by doubting himself and waiting for her to make it even more obvious that she likes him.

He will show lots of interest in her and hope that she leads the way to kissing, sex or an exchange of phone numbers. Yet, when the attractive woman realizes that he’s yet another low self-esteem guy who is intimidated by her, she will instantly lose interest.

How I Bring Up Sex With a Woman

Above: That’s me picking up my sexy, 22 year old girlfriend (she’s 15 years younger than me).

The way that I bring up sex with a woman is “however the heck I want” because I am a confident guy and no matter how challenging a woman may become in an attempt to test me, I never flinch or get nervous.

When I bring up with sex when talking to a woman, I have the confidence to talk about their tits, butt and anything else I want to talk about…even if I have only just met her.

I am not afraid to say whatever I want to say because I know that women like me.

How do I know that? I am skilled at making women feel attracted to me (e.g. by being confident, charismatic, charming, funny, etc), so I know that when I show interest in a girl, she will usually be excited and hoping to get a chance to be with me.

What do I say to bring up sex?

Example: I will look the woman up and down, smile and say, “Look at you…you’re a sexy little thing aren’t you?” and she will then gush and feel all girly around me.

I will often then tell her to “turn around…let me see your butt” and she will turn around. Why? I make women feel girly and they then respond to my masculine direction. They love it.

Some guys might see the above statements as being sleazy, rude or chauvinistic, but here’s the thing…

If you want to get laid and get a girlfriend, don’t put on an act of being an innocent nice guy. Be a good guy, but also be authentic about your sexual interest in women. There’s nothing to be embarrassed about or hide away from.

Sexual attraction is normal and women welcome your interest in them as long as you make them feel attracted to you first.

How to Get a Girl to Ask You Out