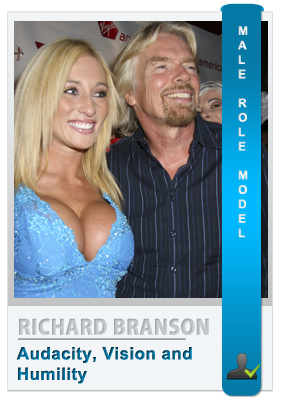 It is his extraordinary abilities as an entrepreneur, adventurer, futurist, environmentalist, and philanthropist that makes mega-billionaire Sir Richard Branson such a great role model for modern men.

Entrepreneur – Founder of the Virgin Group which is made up of more than 400 companies in the music, communication, beverage, and transportation industries.

Adventurer – Branson has traveled the world by air and sea on some of the most exciting, record-breaking adventures ever documented. He is one man who is living his life to the fullest and taking risks that lead to fulfilling experiences and achievements.

Environmentalist – Branson’s efforts to help rid the world of the “greenhouse effect” has led him to be one of the most respected environmental leaders who is working to keep our planet clean and safe for generations to come.

Humanitarian – He has campaigned for the end of nuclear weapons worldwide, worked to end the genocide in Darfur, built schools in Africa and has helped tens of thousands of people worldwide through his efforts, donations and fundraising.

Sir Richard Branson was born into an aristocratic family and he could have had a very comfortable, affluent life with little effort on his part.

However, despite being born with dyslexia (a manageable but incurable learning disability), at a young age, his entrepreneurial spirit and “street smarts” allowed him to build a mega-billion dollar empire with a brand name that is recognized throughout most of the world.

His love of adventure has taken him on record-breaking journeys and his humanitarian passion has led him to strive to make the world a better place for all.

While his life has not been without controversy or setbacks, his philosophy to do whatever is necessary to follow his dreams can easily be recognized by the title of one of his best-selling books – “Screw It, Let’s do It. Lessons in Life.”

How often have you let naysayers, roadblocks, setbacks or a lack of confidence stop you from realizing your personal goals? If you have, then you should look to Richard Branson as a role model for the determination to persevere and succeed and see your dreams turn into reality. He is a interesting type of alpha male.

He uses alpha psychology and purpose to push through and “beat” other men. Contrary to the mistaken belief of many modern men, you don’t have to be aggressive or overly arrogant to be an effective alpha male.

Barely into his twenties, Branson made deals with American record manufacturers to purchase some of their excess stock of music albums which he then sold out of the trunk (boot) of his car to individuals and then to retailers in England before starting a mail order discount record business.

He then opened his first Virgin record store in London. (The name “Virgin” was at the suggestion of an employee because they were all so young and new to the business.)

Although he was initially arrested for not paying his export tax on the discounted records, with his family’s help, he paid off his tax debt and then set about lobbying to make changes to restrictions which had previously governed how low record sales could be discounted.

Selling highly discounted records turned his Virgin record store into a huge success which ultimately led to his opening thousands of other stores around the world.

With his growing fortune, he bought a country estate and built a recording studio where he discovered unconventional (but ultimately popular) musicians and groups that other labels wouldn’t sign such as Culture Club, Mike Oldfield, and the Sex Pistols.

His diverse interests led him to start other businesses including Virgin Atlantic Airways, Virgin Cola, Virgin Vodka, Virgin Express, Virgin Mobile, Virgin Communications, Virgin Trains and Virgin Galactic among his many other enterprises.

While not all of his business ventures have been successful and he’s often had to use his holdings in his more prosperous companies to support those that were floundering, he still has seen commercial triumph much more often than failure.

Branson’s business interests were not the only type of conquests that he had sought. Although some adventures did not have an initially positive outcome, he persisted and has crossed the Atlantic by sailboat, floated above and around the world by hot air balloon and crossed the English Channel in an amphibious vehicle – all in record-breaking feats.

He also has engaged in a far range of other exciting escapades that most men would not dare.

No one is saying you should or even need to be reckless in your life to live each day to its fullest.

It is essential, however, that you sometimes take risks that might bring you benefit and attempt something exciting (even if it’s just walking up to a beautiful woman and having a chat with her for a few minutes) to feel a rush of adrenaline and reap the rewards of knowing that you can do whatever you want to achieve in this life.

Often provocative in his approach but always inspiring and exciting to watch, Sir Richard Branson is willing to constantly strive to be better and go after all that he wants. He is quoted as saying, “My interest in life comes from setting myself huge, apparently unachievable challenges and trying to rise above them…from the perspective of wanting to live life to the fullest.”

What huge challenges do you set for yourself? How do you strive to live the fullest life that you can and have the world become a better place just because you’re living in it?

Question: What Do You Say to a Woman After the Conversation Starter?