How to Compliment a Girl: 4 Classic Mistakes to Avoid

The secret of how to compliment a girl is to make sure that she feels attracted to you first.

If a girl feels attracted to you and you then compliment her, she will see you as a charming guy and it will make her feel lucky to be getting your compliment.

However, if you are only being friendly and polite towards a girl and you then give her a compliment, it won’t make her think, “Wow, this guy is so sweet! I want to have sex with him.” Instead, she will just see your comment as a nice, friendly gesture and she will continue to only see you as a nice friend.

Women get turned on and feel excited about compliments from guys that they feel attracted to, not from nice guys who are trying to be liked for being a polite gentleman, a sweet guy, etc.

4 Common Mistakes That Guys Make When Complimenting a Girl

Pretty much everyone has an opinion about how to compliment a girl, but most of those people are guys who actually get laid. So, before you listen to random advice from anybody about compliments, check out these common myths and mistakes…

1. Thinking that it’s wrong or inappropriate to give her a compliment 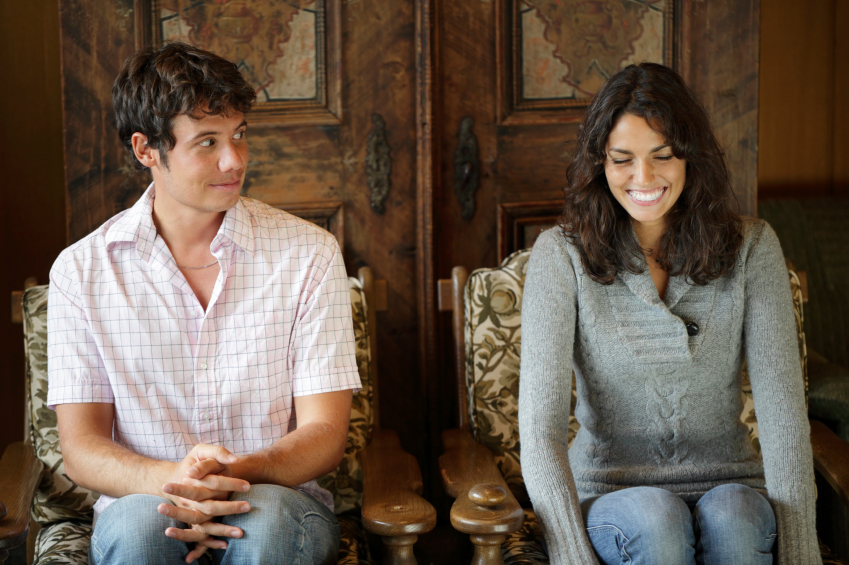 Women love compliments and most women use it as the basis of their self-confidence. Think about it. Why would a woman spend so many hours picking out an outfit and doing her hair and makeup and then not want guys to think she looks nice?

Women often spend hours getting ready and putting on make up even if they’re just going out with other women, but why? Women are direct in competition with one another. What are they competing for? The attention of men!

Whoever looks the prettiest and sexiest will usually get the most attention. The more attention she can get from men, the more options she will have to choose from.

So the myth about women hating compliments is just wrong. If a girl is single, she wants to be noticed and she wants to be approached by a confident guy who knows how to attract her.

2. Thinking that a compliment will turn her on sexually

Some guys who arrive at my site ask me, “Dan, what can I say to get a woman into bed?” or “What compliment will make a girl like me the most and show her that I will respect her if we have sex?”

Guy like that are thinking that a few words will make a completely overlook the fact that he doesn’t even know how to make her feel attracted.

The right way to compliment a girl is to give her that as a reward in addition to feeling attracted to you AND being nice to you.

If a girl isn’t attracted to you and she’s also being a bit of a bitch or playing hard to get, you shouldn’t compliment her.

When you make a woman feel attracted to you and then give her compliments as a reward for being on good behavior around you, she will more of a need to impress you. She will feel attracted and realize that if she’s ever going to have a chance of sleeping with you, she’d better be on her best behavior.

That is a turn on for women because most guys are willing to have sex with a woman just because she looks good. When she meets a guy like you who is more of a challenge and who only gives her compliments when she’s treating you well, she will feel a growing urge to kiss you and have sex with you before another girl takes you.

3. Thinking that a girl will slap a guy who gives her a sexual compliment

If you watch a lot of TV and movies, you may begin to worry that if you express your sexual interest in a girl, she will tip a drink over your head, scream and tell you to go away or slap you.

Yet, it doesn’t work that way in the real world.

If you make a woman feel attracted to you (e.g. to your confidence, charisma, charm, etc) and you then give her a sexual compliment, she will LUCKY to be getting that type of compliment from you.

I remember a time when Ben (one of the coaches here at The Modern Man) and I got a woman to open her jacket and show us the size and shape of her boobs and she LOVED it.

Why did we get her to do that?

She started it off by pointing out a woman with big boobs and then said, “I don’t have nice boobs” and Ben and I said, “Show us. Open your jacket” and she laughed and went along with it (she was wearing a tight, white t-shirt underneath).

Ben and I then gave her an analysis of her boobs, “Nice. I like ’em” and she loved it. However, we don’t go around doing that as an opening line to women and we haven’t done the exact same thing since (variations of that, but not the same). Why? It’s all about timing and relevancy.

We wouldn’t say that to every woman, but in that moment, it was the right thing to say for that particular woman because she was attracted to both of us and we could tell that she was going to appreciate our sexual compliment. She was also a confident, savvy woman who was hoping to meet a guy who wasn’t afraid to talk to her with such fearlessness.

I’m not suggesting that you use sexual compliments or try to be sleazy when you meet women.

For example: If you were to walk up to a woman you didn’t know and say something like, “Gee, those jeans are so tight and make your ass hot. I want to bang you. I’m wondering how difficult it would be to get them off you so I can give it to you!” you may earn yourself a slap from SOME women.

95% of women (possibly closer to 99.9%) will not slap you, even if you are being really sleazy because most women don’t immediately get aggressive like that. It’s just not a woman’s nature to want to hit a man and get into a physical fight.

In all of the years that we’ve been coaching guys on how to approach women, we’ve never seen a woman slap a client of ours and we’ve never been slapped ourselves. Women are a lot more friendly and open to being approached and interacted with than most guys realize.

Most women are thrilled by a sincere, thoughtful compliment even if it has a discreet or obvious sexual undertone. They just love being made to feel special, beautiful and noticed.

However, let me be clear…

Women want to get compliments from guys who make them feel attracted FIRST, not from nervous, wimpy guys who are hoping to be liked by women for being nice. If a nervous nice guy suddenly starts talking about how sexy a woman is, she will usually get “creeped out” by it and reject him.

That’s just how it works.

A sexual compliment needs to be delivered with confidence and it needs to come from a guy that has already made her feel sexually attracted to him.

4. Trying too hard to be liked by giving her a lot of compliments

If a guy gives a girl too many compliments, she will begin to feel suspicious of him.

For example: He not only compliments her on her beauty, but also says that he thinks she is intelligent, cool, great to talk to, has a great fashion sense, is unique and points out other positive qualities about her.

When she tells a joke, he laughs…hard. When she talks about boring things, he compliments her by showing a lot of interest in what she is saying, rather than being real and losing interest when she drifts off into boring topics of conversation.

A guy who does that is not only going to come off as insincere, but he’s also going to appear like a wannabe “groupie” of hers. After a few minutes of being over-complimented, a girl will usually start to feel like she is too good for the guy.

She will wonder why he looks up to her so much and sees her as being so amazing, when she knows that she’s just a normal girl. She may act like she thinks she’s the hottest girl in the world, but most girls are insecure about their looks and simply act that way to make guys try harder to pick them up.

How to Please a Woman in Bed