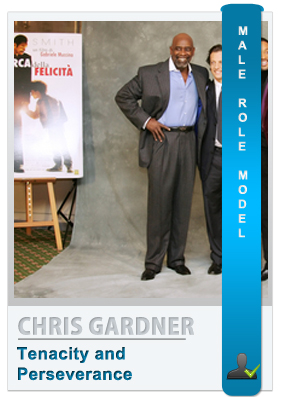 Chris Gardner, whose remarkable story was portrayed by Will Smith in the award-winning blockbuster, “The Pursuit of Happyness,” started out with a life that by no means spelled future success. Yet, with extraordinary courage, a positive attitude, tenacity and resourcefulness, he became the type of man whom any modern man could look to as a role model.

Tenacious – Despite his lack of education and resources, he persevered until he achieved his goal to be a successful stockbroker.

Resourceful – Even though he was working in a somewhat promising sales job, he was often homeless as he started on his road to riches. Since he had his young son to care for, he always made sure to find a place for them to spend the night.

Today, his son doesn’t recall feeling homeless. Rather he says he just remembers that they moved around a lot and his father made it an adventure.

Philanthropist – Remembering what it was like when he was starting out and was broke and desperate, he makes it his mission to help others who are less fortunate so that they too can achieve their own success.

He helped fund a project that provides housing and employment opportunities in the area of the city that he was once homeless in.

Devoted Father – Because Chris’ father left him as a small child, he vowed that he would never abandon his children. He took sole custody of his son and daughter when he divorced their mothers.

However, because of Chris’ desperate situation (his father abandoned him and his siblings at a young age, his mother was arrested on several occasions and he was often placed in foster care), his mother taught him that he had to become self-reliant. He quotes her as saying, “You can only depend on yourself. The cavalry ain’t coming.”

Without any positive male role models in his life, Chris could have easily followed his family’s unfortunate pattern of poverty and problems. However, he was determined to seek a better life for himself and ultimately his family. While it wasn’t always a straight path, Chris had big dreams and was determined to pursue them.

When he left high school and wanted adventure, he joined the United States Navy. While in the service, he met a respected cardiologist, Dr. Robert Ellis, who offered him a position assisting him in clinical research.

When he ended his four-year stint in the Navy, Chris moved to San Francisco to work with Dr. Ellis and learned how to manage a laboratory and perform some basic surgical procedures. He even co-authored several articles with Dr. Ellis that were published in medical journals.

Chris decided that he wanted to become a successful doctor. However, when he realized that he would need to spend another ten years training and tens of thousands of dollars he didn’t have to become a doctor, he decided that it was an unrealistic goal.

His marriage to his new bride began to fall apart when he told her that he’d given up on his dreams of becoming a doctor. Soon enough, he began having an affair that resulted in him fathering an out-of-wedlock son, Christopher Medina Gardner, Jr. The affair ended his marriage and he went to live with his mistress to help raise their son.

Chris continued to work as a lab technician, but with his small salary the couple had difficulty making ends meet. Chris then set about taking a slightly more lucrative job selling medical equipment.

One day, while out making sales calls, he spotted a well-dressed man parking his red Ferrari. He stopped the man and asked him how he got so rich.

The man told him that he was a stockbroker and from that moment on, Chris knew that he’d found his career path. He then asked Bob Bridges, the owner of the sports car, how he could become a stockbroker. Bob took Chris under his wing and introduced him to many people in the business and set up interviews for him with brokerage companies that had training programs.

The numerous interviews kept Chris from being able to keep appointments to sell his medical equipment and that drastically impacted his salary (and he simultaneously managed to rack up numerous parking tickets while he was out doing interviews and making sales calls).

Eventually he landed a trainee position with a major brokerage house and quit his sales job so he could work at his stockbroker training full time. But just when it seemed that Chris was finally going to be back on the road to success, he hit several major obstacles.

On the day he was scheduled to begin his training program, he learned that the man who had hired him had been fired. Chris was once again without a job.

His relationship with his mistress was going badly and she (allegedly falsely) accused him of beating her and he was arrested and taken to jail. In court, the judge dismissed the abuse charges but sentenced him to ten days in jail for not being able to afford to pay the $1,200 he had accrued in parking tickets.

When Chris returned home from jail, he found that his mistress, his son, and all of his possessions (including his clothes) were gone and she had moved to the East Coast. Chris was devastated.

Not willing to give up on yet another big dream, Chris went to one more brokerage house (in the casual clothes he was wearing when he was arrested) and was so persuasive that he convinced them to give him a stockbroker trainee job (with a very small salary that didn’t allow him to pay for most of his living expenses).

He was determined to be the best stockbroker candidate that he could be. He came to the office early, stayed late, made hundreds of cold calls to strangers each day and eventually worked his way up to being their top trainee. When he passed his difficult securities licensing test on the first try, they offered him a full-time position.

Whether it’s meeting a girl, getting a job or trying any number of pursuits, you can come up with numerous excuses about why you won’t be able to succeed.

If you’re like Chris and are determined enough and show enough drive and confidence, you’ll eventually be able to convince others that you should be given a chance. Then it’s up to you to prove that their trust in you was well deserved.

Still, as a beginner, his salary and commission schedule was extremely small and he was forced to live in a run-down rooming house. Then four months later, his mistress returned and gave him full custody of their son. While Chris was thrilled to have his young son back with him, his landlord didn’t allow children and he was forced to move out. In the movie, “The Pursuit of Happyness,” for dramatic dialogue purposes, Chris’ son was portrayed as a five-year-old. In reality, Chris’ son was only a toddler.

Without enough income to afford a traditional apartment, Chris and his son had to stay in abandoned buildings, low-rent rooming houses (often called flophouses), churches, after hours in his office in the after hours, shelters and even a locked toilet in a train station.

So that he could still work, Chris was often forced to leave his son with virtual strangers, and when he could afford it, he put Chris, Jr. in a child care facility called “Happyness” (which explains the odd spelling of the word “happiness” in the title of Chris’ book and the movie). Leaving his son each day was the hardest thing he had to do.

No one at work realized that Chris was homeless and he was too proud to let them know. Yet, despite his desperate situation, Chris persisted and became such a successful stockbroker that he was ultimately recruited and hired by another firm. By then, he was able to afford proper housing for him and his son.

Four years later, Chris formed his own brokerage firm, Gardner Rich & Co., in Chicago with a $10,000 investment and one piece of furniture (a desk that doubled as a work space and dining table). His ultimate goal to be the best at something was finally coming true.

He worked very hard to build his firm and it paid off…big time. He eventually became a multi-millionaire when he sold his shares in his firm and then he went off to pursue his next dream which was to start Christopher Gardner International Holdings with offices in New York, San Francisco and Chicago.

News of his “rags to riches” success story led him to be interviewed on the highly-rated American televised news magazine “20/20.” This exposure attracted much media and public attention. Chris then realized that his story could possibly help others who also found themselves in difficult situations.

It was then that he wrote the best-selling book, “The Pursuit of Happyness.” The success of the book and more media attention led the book to be made into a movie of the same name. Notably, Chris didn’t attend the premiere of his own life story because he felt it was more important to give an inspirational speech to a group in Wisconsin.

As a multi-millionaire Chris has turned his attention to more philanthropic pursuits that combine his knowledge of finance and his great desire to help others like him who have found themselves in financial straits.

He and his firm have raised money to build low income housing, provide career counseling and job placement services and even offer job training for the homeless and poor in at-risk communities in Chicago. Interestingly, because he understands the importance of proper attire for job interviews, he donates clothing and shoes to numerous homeless shelters.

He has gone to Africa to help create training and finance programs for the poor and he travels the world as a popular and well-paid motivational speaker.